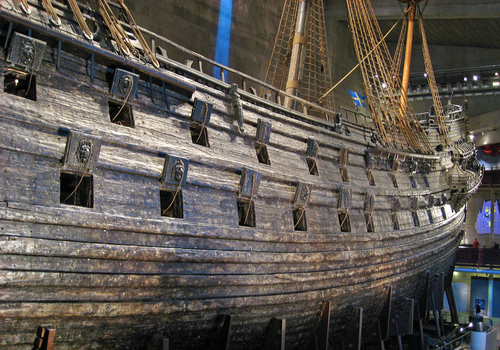 In 1625, the King of Sweden commissioned the building of the warship Vasa (pictured above) for the fight against Poland. No expense was to be spared.

It started as a relatively small ship, but the King wanted something much more impressive. So the keel was extended by nearly a quarter, and the main part of the ship was made longer and wider.

Then the King heard that Denmark was building a ship with two gun decks instead of the usual one, so he wanted two gun decks as well.

And warships were supposed to be impressive at sea, so he had it heavily decorated with massive, ornate, and colourful oak carvings depicting dramatic religious and historical scenes.

All in all, some four hundred people were toiling away on its construction.

By the time the Vasa was launched in 1628, it was the biggest project ever undertaken by Sweden and the most expensive ship in the world. It set sail at 4pm on Thursday the 10th of August. After a short time it was brushed by a light gust of wind, at which point it tipped over and sank to the bottom with the loss of 53 lives.

It lay at the bottom of Stockholm harbour for the next 333 years until it was raised in the 1960s, and if you visit today you can admire it in a museum near the fatal site.

Despite all the impressive skill, effort, and resources that were poured into the building of the Vasa, it sank for an almost comically simple reason. It was top heavy.

Closer to home in today’s NHS, much skill and effort, and resources too, are being poured into keeping waiting times down. The craft of contemporary waiting list management has been honed since the 1980s, from ‘tailgunning’ right through to the modern ‘PTL’, accompanied by highly-developed reporting systems, trajectories, incentives, and regulation, as well as monthly, weekly, and sometimes daily management meetings to make sure everything stays on track.

Extra clinic and theatre sessions are laid on, rising breaches are prioritised for treatment, and patients are asked to transfer to the private sector. Teams of validators sweep in to clean the waiting lists, entire staff groups are trained in the ’18 weeks’ rules, access policies are revised, and contract variations are negotiated.

Yet nationally, the waiting times targets have sunk. All the weaponry and ornament of modern waiting times management has failed, and for a simple reason. The waiting list is just too big.

Let’s go back to the Vasa.

Before the launch, the naval commanders had tested the Vasa’s stability by having 30 men run across it repeatedly from side to side. They had to abandon this “lurch” test on the third run, because the ship was rocking so violently that it was in danger of capsizing.

So the people at the dockside, who were actually going to operate the ship, knew perfectly well that it was unstable. But the King was getting impatient, and Poland was threatening.

Here are three practical things you need to do to make it happen.