The headline 18 week target was narrowly breached in February, and in this post we’ll dive into the England-wide figures in more detail. (The King’s Fund also has analysis here. If you want local figures, you can find a map of the 18 week pressures here.)

The headline target was breached because the solid line edged up above the 18-week mark. Can’t see it? Alright, here’s a blow-up of the same chart:

Personally I would say it’s a little early to declare a trend. But the solid line has certainly been rising hesitantly for a few months, and it did breach the target for the first time in over a year.

More significantly, the dotted line (which shows the underlying waiting time pressures) has remained above 18 weeks since late last year, and has clearly been rising since last spring. Now that does look more like a trend. If hospitals respond by trying to admit their long-waiters then we would expect their efforts to hold the solid line above 18 weeks too. The trouble is that not all Trusts do this and so the solid and dotted lines are not as strongly bound to each other as they should be; Trusts can simply ignore their long-waiters, and achieve the headline target by admitting only short-waiters.

So to get a fuller picture of what is happening, we need to look at each Trust to see how they are responding to the underlying pressures. The following video (introduced here) shows the position at each Trust over time. As in the charts above, these charts show the time beyond which 10 per cent of patients waited: red blobs for patients still waiting (the underlying pressures), and blue blobs for admitted (i.e. treated) patients (the headline target).

Looking at the video, things look much the same in February as in January. Here is the final slide, showing February.

The intriguing thing is that the blue blobs are starting to “boil up” again, which might indicate that Trusts are starting to relax their efforts to achieve the headline 18 week target. But it really is too early to tell.

The point where the red line crosses 18 weeks is almost the same as in January, as the following chart shows. 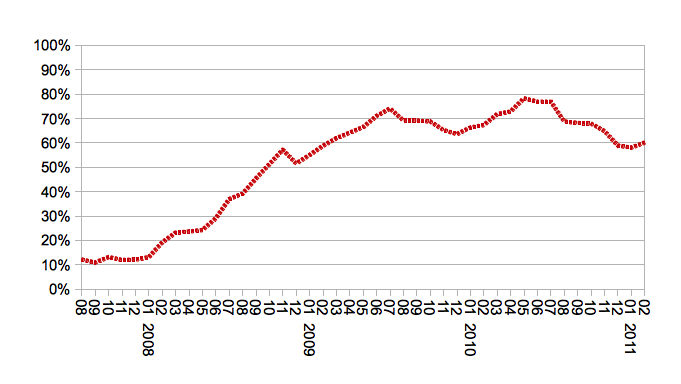 So 18 weeks remains under pressure. Will the headline target be breached again in March? It’s impossible to say, because the headline target is not closely linked to how long still-waiting patients are waiting. It is high time this peculiarity was removed, by amending the secondary legislation and standard NHS contract that encourage it, leaving Trusts free to do the sensible thing and tackle long-waits by treating long-waiters.