Waiting time pressures have turned the corner and are now getting worse. One in ten patients on the waiting list had waited over 17.6 weeks at the end of July, up from 17.2 weeks in June and worse than July 2010 at 17.3 weeks. You can see the trend in the dotted blue line below.

As we head towards the winter, we are starting from a worse base than last year. We might even see the dotted line breaching 18 weeks in next month’s figures, which would be a whole three months earlier than in 2010.

Very-long-waits are up too. There are 19,939 over-52-week-waiters on the waiting list, the highest since August 2010. However, as we will see below, this apparently huge increase (up from 13,259 last month) is explained by two Trusts submitting data after a prolonged absence from the series.

The government, unfortunately, prefers not to follow the waiting list. Instead it watches those patients lucky enough to be treated, and you can see how long the top ten per cent of admitted patients had waited in the solid blue line below. This is a lagging indicator, as you can see by looking at what happened last winter: pressure built up on the waiting list in November and December (when the dotted waiting-list line went up), and then the NHS cleared that backlog in February and March (the dotted line came down, and the solid admitted-patient line went up as the long-waiters appeared in the admission statistics).

So if you hear Ministers cheering that 90.6 per cent of inpatients and daycases were admitted within 18 weeks, up from 90.2 per cent in June, ask yourself this: if long-wait pressures are growing, is it really a good thing that more short-waiters (and fewer long-waiters) are being admitted? And you’d be right to question; the politicians have the whole thing backwards.

The total waiting list is possibly even more of a leading indicator. At least, it was last year: the total number of patients on the waiting list peaked in the height of summer and then fell (even as the longest waiting times rose). So far, the pattern is repeating again this year, giving no comfort that we are going to avoid a repeat of last year’s long-waiters. 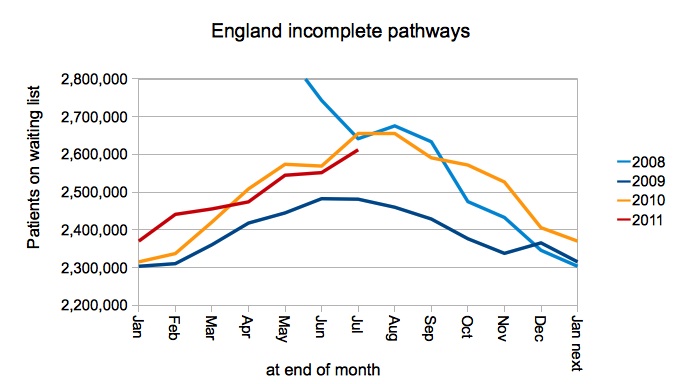 What about activity? Well, the NHS seems to be working just as hard as last year, with no sign of any drop caused by limited finances. Admissions are following the same pattern as 2010, and if you compare admissions with the number of working days in the month (not shown in the chart below) then last year’s pattern is being followed closely. 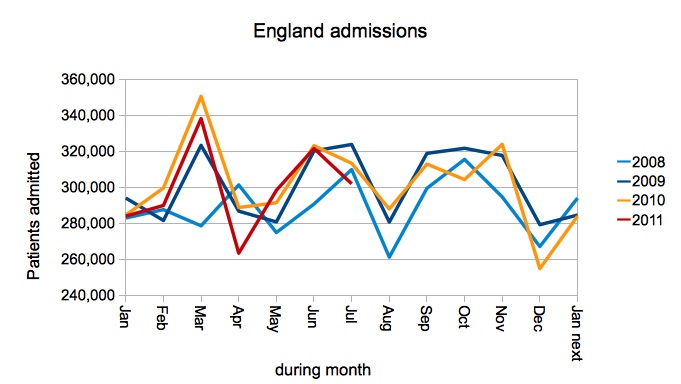 For more detail on the English figures you can download our RTT waiting times fact checker, which contains complete time series for all the main English waiting time measures, here:

Everything in healthcare is characterised by gross and inexplicable variation, and waiting times are no exception. 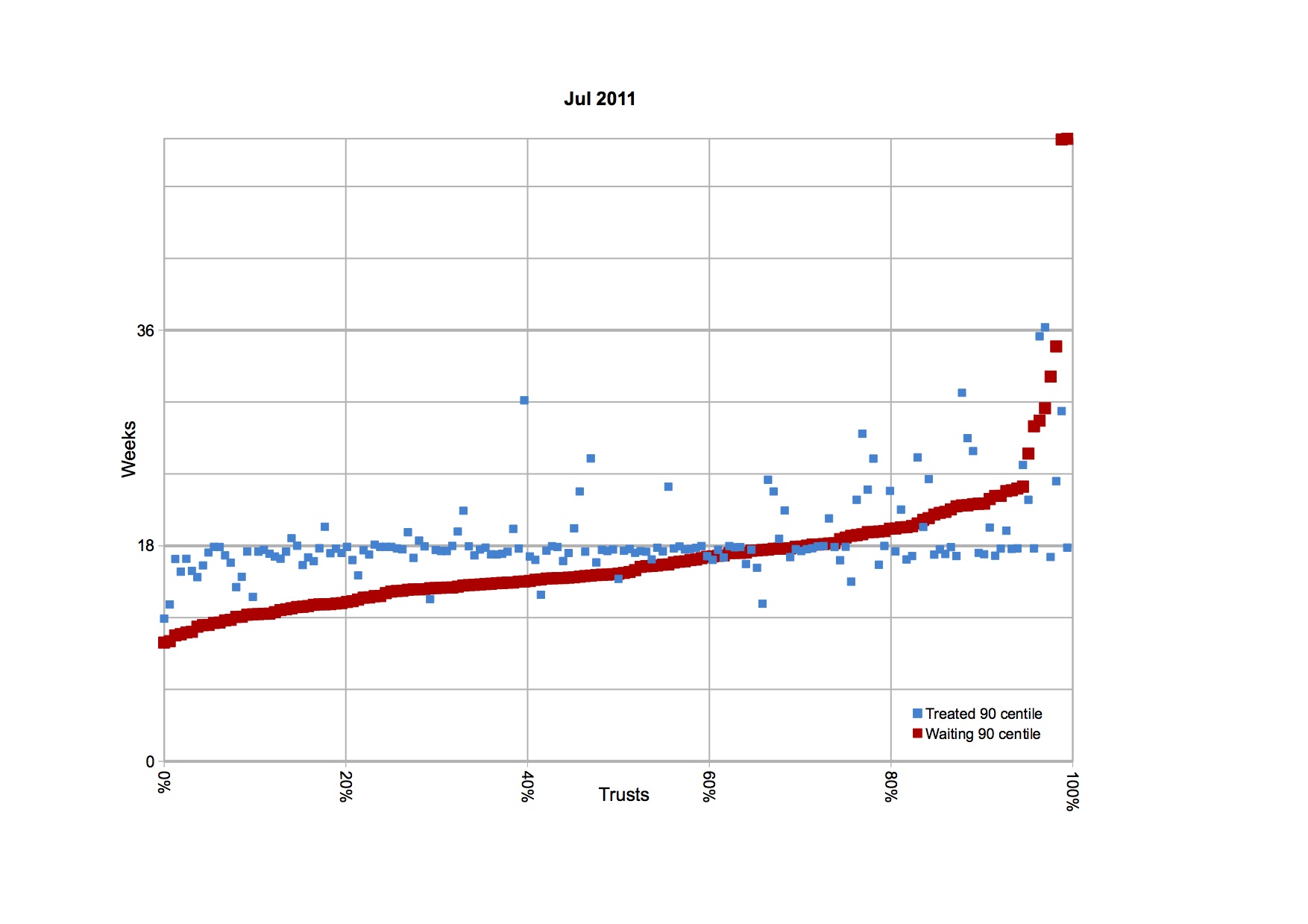 The proportion of Trusts, where at least 90 per cent of patients on the waiting list are under 18 weeks, has improved slightly since June, showing that the rise in long-waiters is increasingly concentrated in a minority of Trusts. At 71 per cent, this is the best since July 2010. The next chart shows the trend; this chart is related to the one above because it tracks the point where the red line (in the chart above) crosses 18 weeks.

Which Trusts have the longest-waiting patients on their waiting lists? Here’s the top 20: they’re the 20 red dots to the far right of the blue & red dot chart above. This time I’ve added a new column to the far right, so that you can see who is “meeting the target” while their long-waiters languish on the waiting list.

Both Kingston and St George’s are new entrants to the table, in June and July respectively. Both hospitals reported very large numbers of patients waiting 52 weeks and longer: 4,483 at Kingston; 3,193 at St George’s. The total, 7,676 at the two hospitals, is larger than the national increase of 7,409 seen for English 52-week-plus waiters since May (which was the last month when neither hospital submitted data). I don’t have local knowledge of what is happening at these Trusts, but I expect there are serious data quality issues involved.

Data for all Trusts

You can find full details of the position at every English Trust, including time trends and peer comparison, via the interactive maps below: choose a specialty and click on it, then click on a pin to get a balloon showing a summary of any Trust’s data, and then click on the Trust name in the balloon to get a full analysis with charts.

There are separate maps for each specialty (all maps based on incomplete pathways):

Here’s a thumbnail of the interactive Orthopaedics map to whet your appetite: 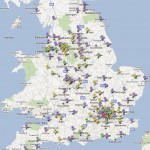 If you have a particular Trust in mind, you can directly look up its detailed reports here.

All the above analysis comes with a caveat: in many parts of England there are restrictions on hospital referrals that have the effect of blocking or holding up patients before they arrive on the hospital waiting list. Those patients are not included in the reported figures, and so they are missing from this analysis.

The August 2011 RTT waiting time figures are due out at 9.30am on Thursday 13th October.