The NHS fended off its waiting time pressures in August, providing some much-needed breathing space as winter approaches. The total waiting list was down 1.5% compared with August 2010, as were other waiting list-based indicators across the board: over-18-week waiters were down 6.8%, over-26-weeks down 9.2%, and over-52-weeks down 4.4%.

By a bizarre coincidence, the number of over-one-year waiters was exactly the same as in the previous month, at 19,939. But that’s still 19,939 too many. The NHS admits 270,000 under-18-week waiters every month, so why does it not treat these very-long-waiters? This month we are raising the profile of these over-one-year waiters, and you’ll find more details about them both in our interactive maps and in the detailed Trust-specialty reports.

The Government’s preferred measures don’t focus on the waiting list, however, but focus instead on patients who were lucky enough to be treated during the month. Both of the NHS Constitution targets were met in August, and the official statistical press notice and all the data are available here.

For a comprehensive collection of referral-to-treatment (RTT) waiting times measures with time trends, you can download our waiting times fact checker here:

This improvement was helped along by the relatively high level of admissions in August, as a result of the way the weekends fell this year, as shown in the following chart: 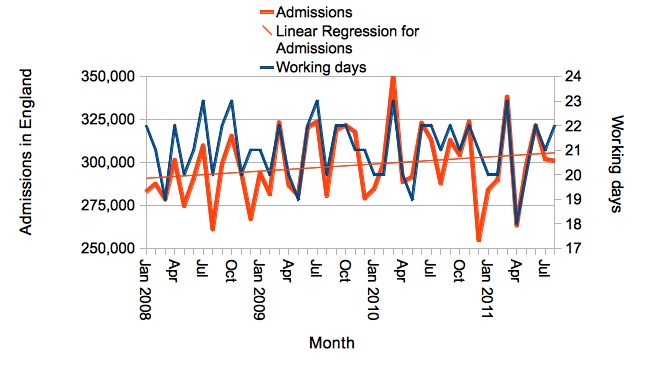 As a result the number of admissions was the highest of any August in recent years: 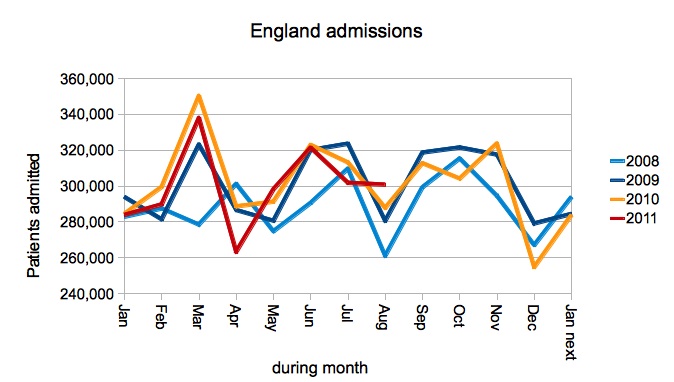 Not that this made any particular difference to the overall size of the waiting list, which continued to shadow last year’s trend (though slightly improved): 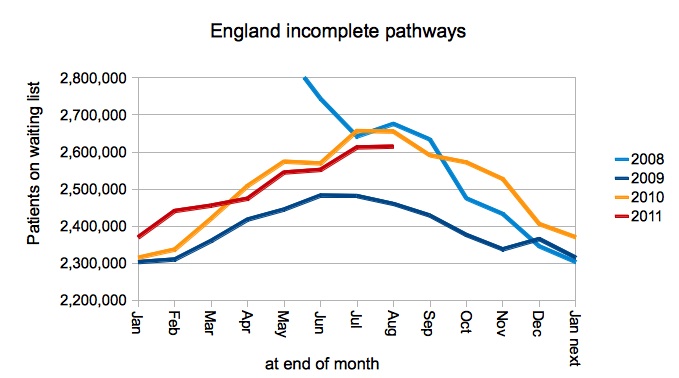 Drilling down to specialty level, Neurosurgery continues to cause concern at a national level, and General Surgery edged a little closer to becoming the new Orthopaedics in terms of big-specialty waiting times trouble. All other specialties were level or slightly improved.

In July, only two Trusts (St George’s and Kingston) reported more than 1,000 over-one-year waiters on their waiting lists. In August that number trebled, with Guy’s and St Thomas’, RUH Bath, Sheffield, and South London all joining the club.

Over-one-year waiters are also found in smaller numbers all over the country, as this interactive map shows. 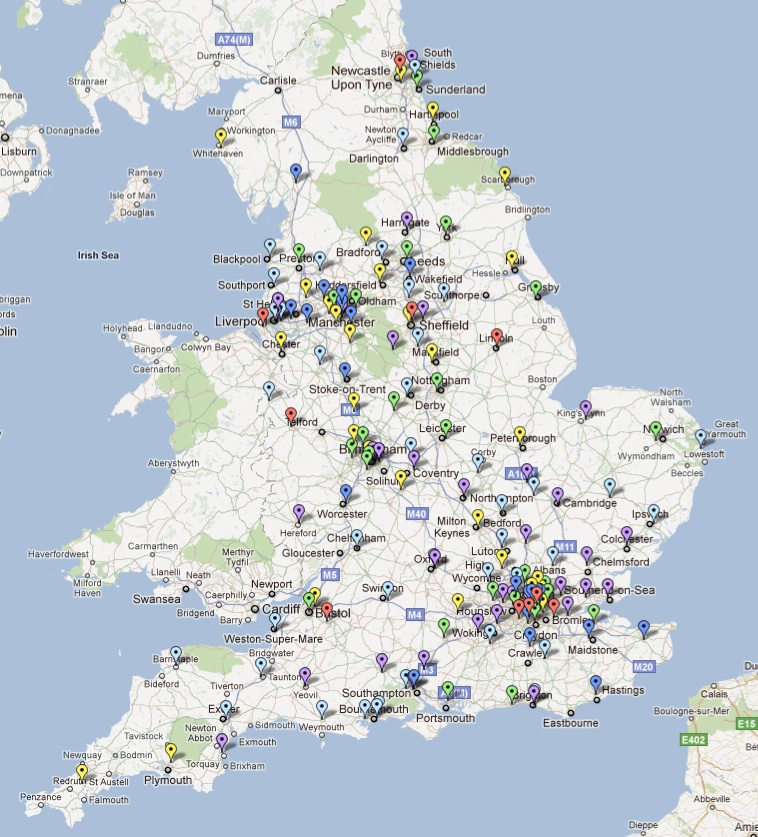 If your Trust has over-one-year waiters on the waiting list, there may be a belief within your organisation that those patients aren’t really in need of treatment: they’re probably miscoded watchful-waiters, or not been removed, or something. But can you put your hand on your heart, and swear that not a single one of them needs an operation? I didn’t think so. And that’s why it’s important not to lose sight of these patients, and why we’re raising their profile again today.

Returning to the rest of the waiting list, we continue to see the perverse effects of the Government’s preferred waiting times measures, with plenty of Trusts achieving the “90% of admissions within 18 weeks” target, despite having plenty of much longer waiters.

In the following chart, each Trust is represented by a pair of dots. The red dot shows the waiting time that 90 per cent of the waiting list falls below. The blue dot shows the waiting time that 90 per cent of admitted patients (i.e. admitted during August and no longer waiting) had waited below. If a Trust has high waiting time pressures (i.e. a high red dot), you might expect them to bring those pressures under control by admitting their long-waiters, and so their blue dot would be high too. Unfortunately the Government’s preferred waiting times targets punish Trusts for having high blue dots, so they try to keep them below the 18-week line, which is why lots of Trusts have high red dots but low blue dots. The targets get in the way of Trusts dealing with their waiting time pressures, which is unfair on the Trusts, bad for patients, and needs sorting out. Keep passing the message on, we’ll get there one day. 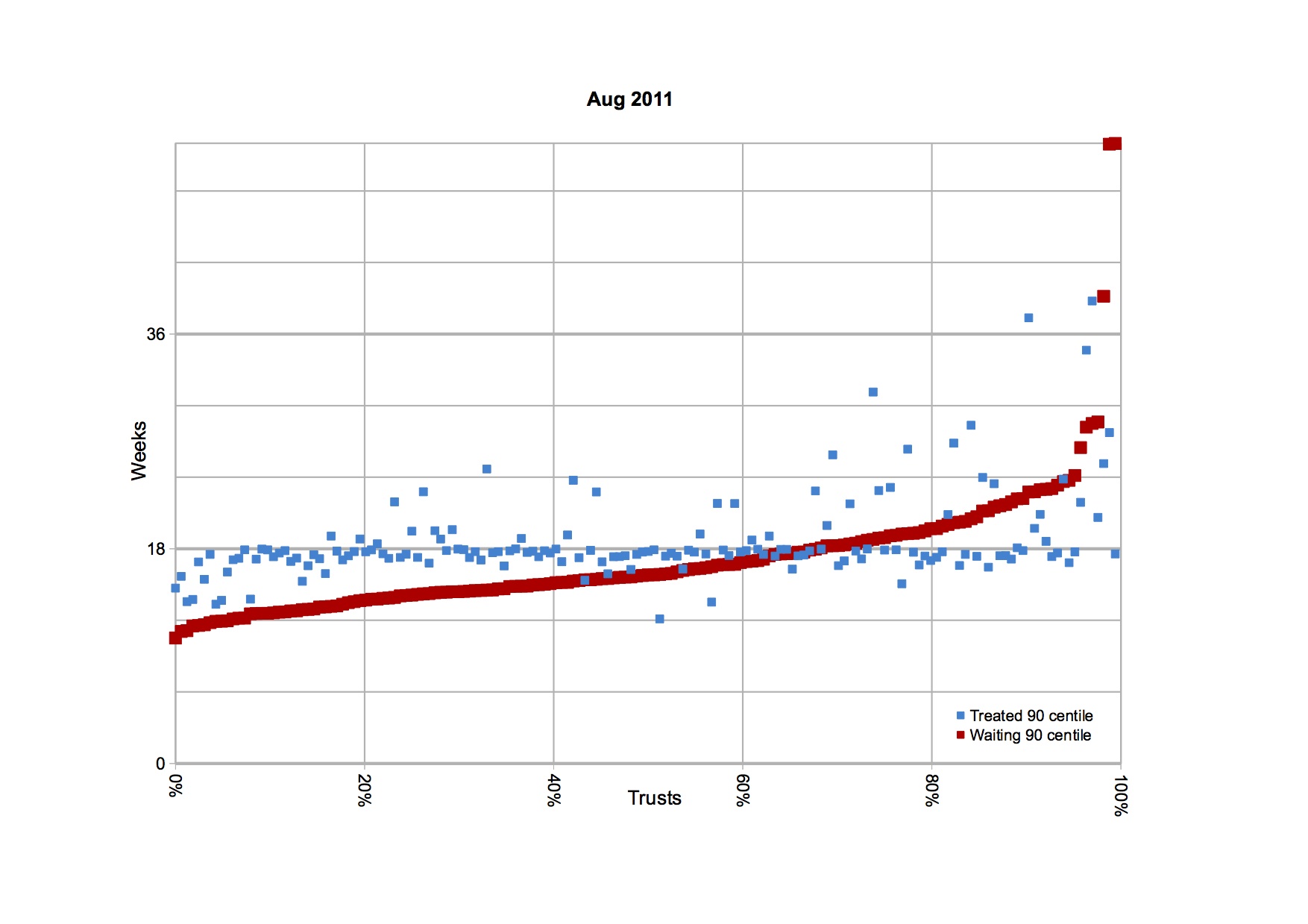 Long waits, on the waiting list and admitted, by Trust

The point where the red dots cross the 18 week line is interesting, because it shows the balance of Trusts with and without high underlying waiting times pressures. This proportion changes over time, and in August it fell back but only very slightly:

The Trusts with the greatest waiting time pressures, which are those to the far right of the blue/red dot chart above, are shown here as a “top twenty”. As you can see, several Trusts are achieving the “90 per cent within 18 weeks” target even though they have high proportions of long-waiters (and are even making some patients wait more than a year).

For full details of waiting times and over-one-year waiters at Trusts and specialties across England, these interactive maps show where the pressures are. Click a specialty to see the map, then click the pins to get numbers for each Trust, and you can even click the Trust name to get a very detailed report with comparisons and time trends. (Or you can go straight to the detailed reports here.)

All the specialty maps are here (all maps based on incomplete pathways):

For example, here is the map for General Surgery: 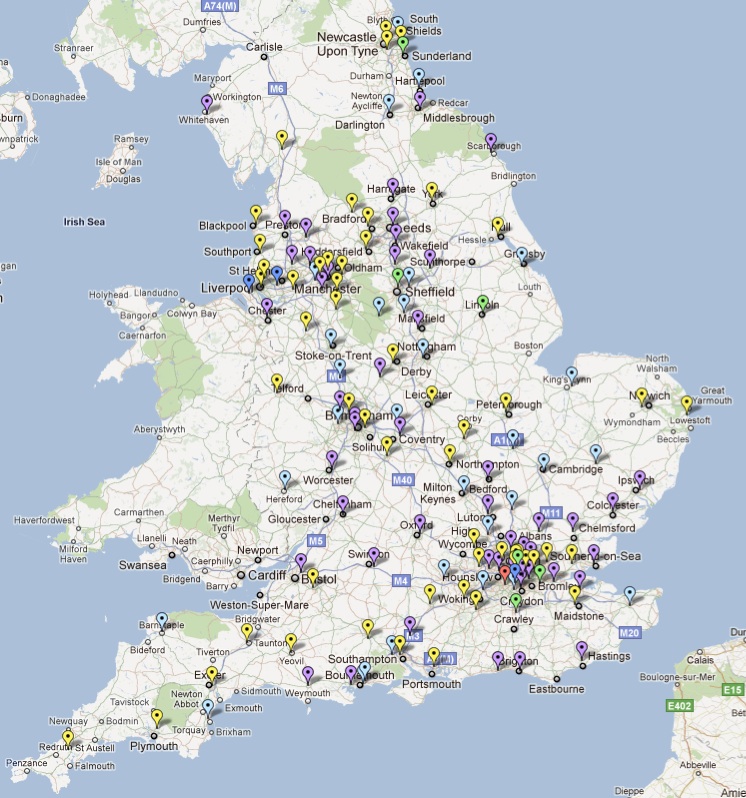 All the above analysis comes with a caveat: in parts of England there are restrictions on hospital referrals that have the effect of blocking or holding up patients before they arrive on the hospital waiting list. Those patients are not included in the reported figures, and so they are missing from this analysis.