Previously we looked at how the new week-by-week profiling feature is shaping up in Gooroo Planner. Now we’re going to look at something else we’ve been working on: constant-capacity profiling.

The idea is that routine elective activity can be planned around peaks and troughs in non-elective and urgent elective demand. To show an example, the following chart represents (illustratively) the non-elective and urgent demand in ten fictitious clinical services. The clinical services are shown in colour, and the grey columns at the back show the total across all ten services. The heights of the columns represent whatever kind of capacity you want to keep constant.

(These charts won’t actually feature in the implementation… they would be too complicated with dozens of services and 52 weeks. So we’ve used them here just to illustrate what happens. The actual implementation will crunch the numbers, and then let you tinker with each service separately.) 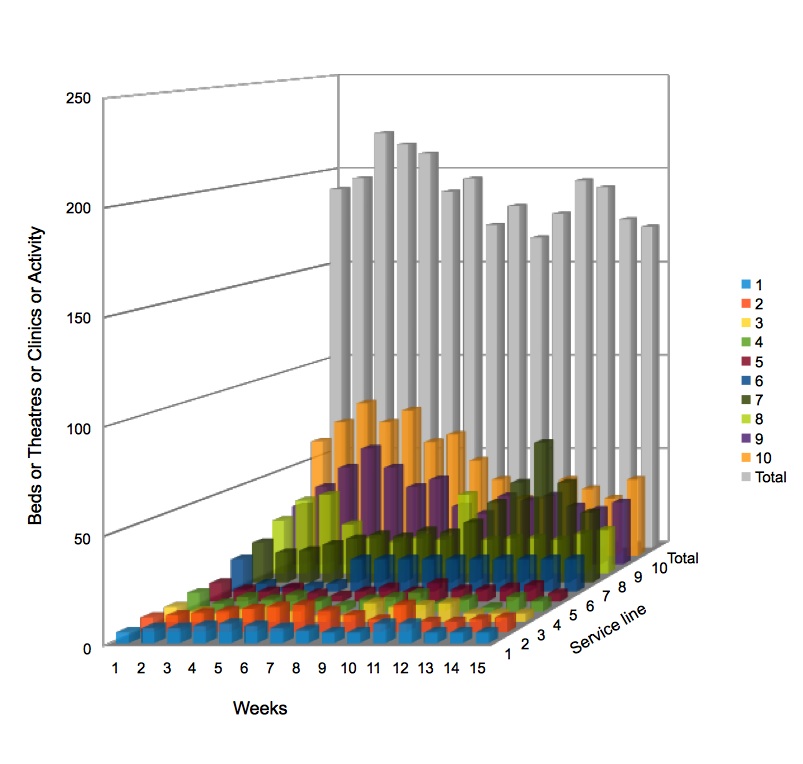 As well as the non-elective and urgent elective work shown above, each service also has some non-urgent elective work that isn’t shown on the chart yet. We want to work out how to profile this non-urgent work across the weeks, so as to keep our capacity usage (and therefore our staffing of that capacity) constant. After running the algorithm, this is what we end up with: 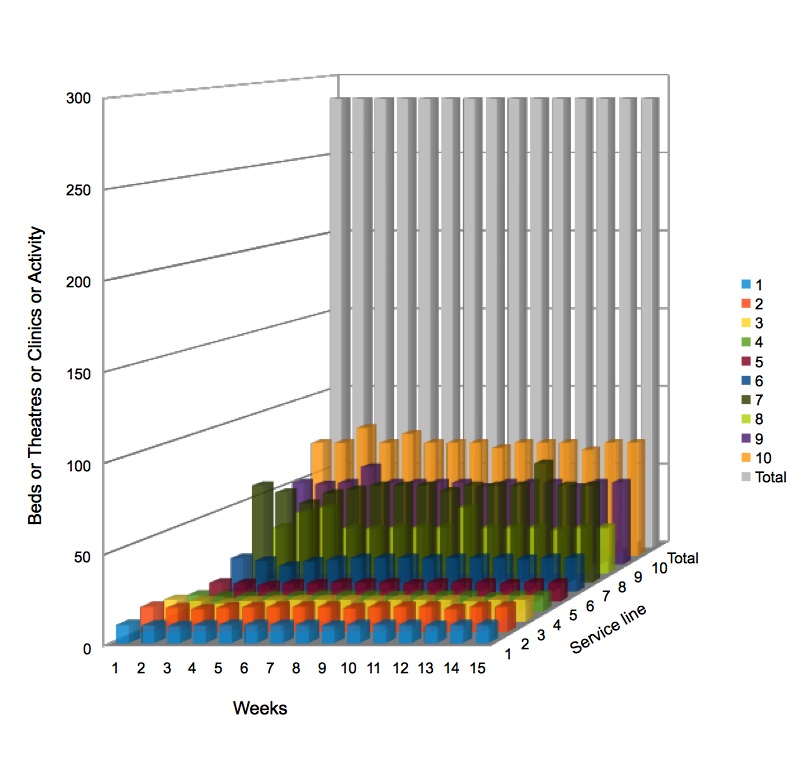 The algorithm does its best to achieve constant capacity across the weeks for all services added together, and as a secondary goal it also tries to achieve constancy for each service separately. In this example, some services did not have quite enough non-urgent activity to allow perfect constancy, and whenever that happened it carefully rebalanced the profiles across the other services and across time. That way, it was able to achieve perfectly constant capacity in total, whilst minimising variations within each service.

There are easier ways of designing the algorithm (such as the methods I used when developing earlier widely-used planning models). But I think this method was worth the effort, because of the better constancy at service level.

What are the drawbacks of profiling for constant capacity? The main objection is that it does not reflect the constraints that drive real-life activity profiles in today’s NHS. Usually, it is not the number of physical beds or theatres or clinics that determines activity (although this does happen from time to time), but the availability of staff. And the availability of staff varies through the year according to when staff take leave.

So why bother creating a constant-capacity calculation at all? Because when we consulted on how week-by-week profiling should work, we received comments that suggested it might be worth it. Although constant-capacity may not reflect current practice in most hospitals, it is something that people aspire to. At the least, it would be a useful starting point for discussions, even if the profile was later tweaked to reflect staff leave more closely.

So we’re building it in anyway. Constant-capacity profiling is very fiddly to do by hand, because it involves tweaking all the (dozens or scores of) services across all the (52?) weeks in the profile, and that’s a big job that is best left to a computer. When it’s all built in to Gooroo Planner, you’ll be able to do things like: hit the constant-capacity button, see what you think, hit the button that replicates last year’s pattern, see what you think, pick the one you like better, tweak it a bit, and end up with something that you think works operationally.

The objectives are firstly to make Planner more interactive, and secondly to reach across the divide from strategic to operational planning. So we hope you find these features useful and practical, whether you are an information analyst, an operational manager, or a clinician. If you have any comments on what we’re building, please let us know. We want to get this right for you.