Last month I highlighted the case of a Trust’s Orthopaedic patients, whose waiting time clocks seemed to be mysteriously stuck just below 18 weeks. It was not clear how this was happening, and now we are completely in the dark because they have stopped submitting data.

Then last week, while analysing the December release of 18-weeks data, I spotted a similar pattern at a different Trust. Here are the 2011 waiting list snapshots (i.e. the incomplete pathways data) for Orthopaedics at Salisbury NHS Foundation Trust. 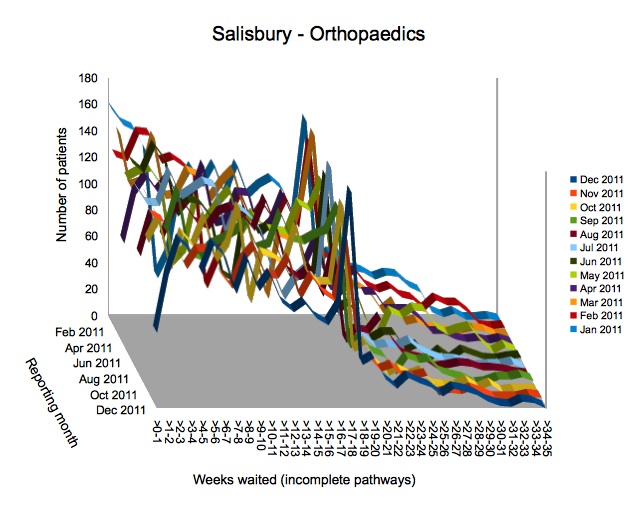 Again, there is a peak in the number of patients waiting just below 18 weeks. Again, this peak does not move forward in time as each successive month goes by; you might expect the peak to move forward by one month, every month. And where do the patients in the peak come from? If these were patients just feeding through the list and then being treated in the usual way, you would see a plateau (where patients were not being treated) followed by a cliff (where they were), not a peak sticking up suddenly in the middle of the waiting list.

So it looks, on the face of it, as if patients in the peak are having their waiting times frozen somehow. According to the RTT waiting times rules, clock pauses are allowed under certain circumstances when measuring adjusted admitted pathways, but there is no provision for pauses in either the non-admitted or incomplete pathways data. So it is difficult to understand how a static peak, in the incomplete pathways data shown above, is possible under the rules.

Whatever Salisbury were doing in Orthopaedics in 2011, it was successful in narrowly achieving the headline target that 90 per cent of adjusted admitted patients should be within 18 weeks. When I say narrowly, I mean that in each of those 12 months their performance stayed in the range 17.962 weeks to 17.999 weeks (and was within two patients of failure on 7 of those months).

It is impossible to tell exactly what is going on, just by looking at these figures. If there is an innocent explanation then I would like to hear it. But if there isn’t, then I would hesitate to lay all the blame at the Trust’s door, because the target that is being so narrowly achieved is perverse. The system of harsh penalties and “performance management” surrounding it has the effect of coercing Trusts into doing bad things.

So if any changes in counting methods do turn out to be needed in Salisbury, it would be good to see commissioners and performance managers exercising restraint to allow the Trust to deal with any backlogs openly. Above all, it should not be forced into taking a ‘reporting break’. There are too many of those going on at the moment already.