The next release of 18-week statistics, due out on Thursday morning, is awaited with particular interest. There is the tantalising possibility that the number of long-waiting patients being admitted might finally (and sustainably) fall below the level of the last General Election. Here are the figures, with the General Election position in the last column:

It will be good for political point-scoring if the General Election scores are beaten, no doubt. But does it actually mean anything?

Let’s remember that what really matters is how many long-waiters are still on the waiting list. The number of long-waiters being admitted is related to this, but they aren’t the whole story. If the NHS admits lots of long waiters, with the result that fewer are left on the waiting list, then that is a good thing. But what does it mean if the NHS admits fewer long-waiters? Is that good or bad? The answer, I’m afraid, is that it could be either, but fortunately it is possible to tell the difference. 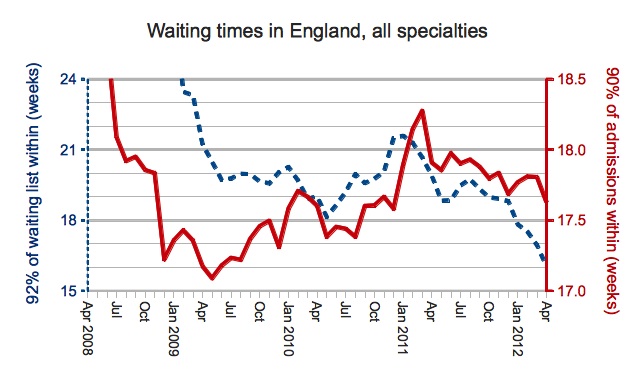 The chart shows two different phenomena. In 2008 and 2009 the NHS was set on achieving the target that 90 per cent of admitted patients must have waited less than 18 weeks. The target was met in 2008 (when the red line crossed 18 weeks) and the waiting list (dotted blue line) caught up a few months later (as the NHS achieved the target “properly”). Here the waiting list lagged the admitted patients, which is not the way around you would expect things to happen normally and was a result of the pressure to achieve the target.

This may have started already, in the April 2012 figures. We will find out on Thursday whether the trend continued in May. My prediction? It will.