OK, caveats first: upticks in over-18-week waits are not uncommon in December, especially in specialties like Orthopaedics. The size of the English waiting list is only a bit higher (seasonally) than in recent years, and anyway counting is getting better as the incomplete pathways target comes to the fore. And we hit a new record-best on one year waits, so things can’t be too bad.

Fine. And yet, I am starting to get worried. It’s that list size: it’s just starting to look a bit too big.

These latest figures for December 2012 come at an interesting time. They coincide with the announcement (just before Christmas) of ‘zero tolerance’ penalties of £5,000 per patient per month for every over-one-year waiter on the list. Although these don’t apply until April, any provider with one-year-waits will be doing its utmost to validate and treat every last one before the penalties kick in. The number of one-year-waiters has been falling sharply for over a year now, and should be reaching for zero over the coming months.

As always, all the source data comes from the Department of Health. You can download a fact-checker for the stats here: NHS waiting times fact checker

Here’s the total size of the waiting list. See what I mean? That red line has learned to hang-glide and is off soaring the ridge. I’ve set up a little poll to see what people think, and you can vote here.

Admissions are still bang on track. But referrals are up, which could explain the big list. 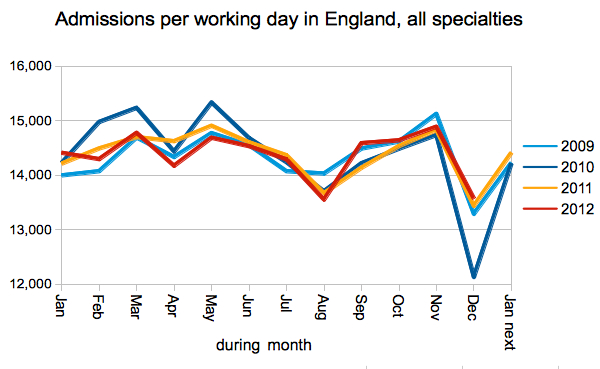 One-year waiters edged down a little to a new record-best. But all other long-wait indicators ticked up a little. 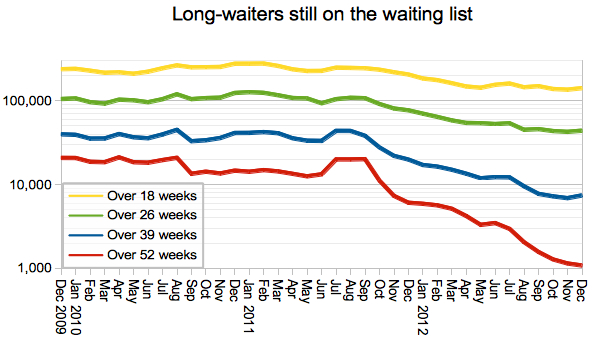 Last week the NHS Standard Contract was amended to give primacy to the target that 92 per cent of the waiting list (incomplete pathways) should be within 18 weeks. This is how England as a whole has been performing (pretty well). 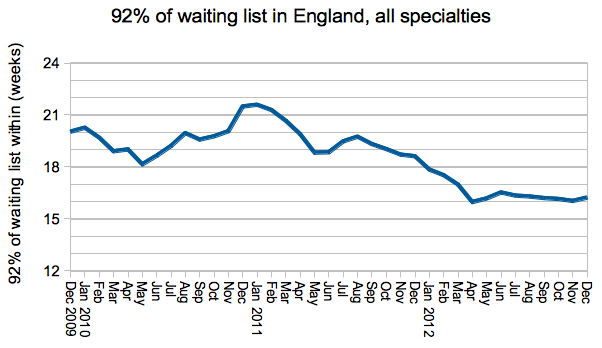 At specialty level, Orthopaedics briefly dipped enough to achieve the target for the first time a couple of months ago, but is now flying away again. General Surgery is also flirting towards a national-level breach. 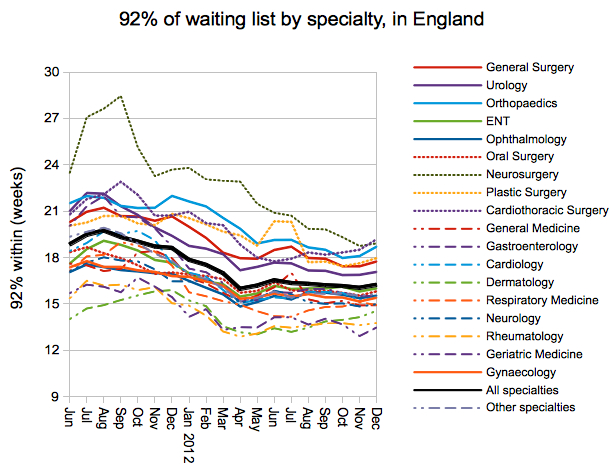 It will take another couple of months before we start seeing the effect of giving primacy to the 92 per cent list-based target (it was only announced this month). In the meantime the proportion of services achieving it is pretty much treading water. 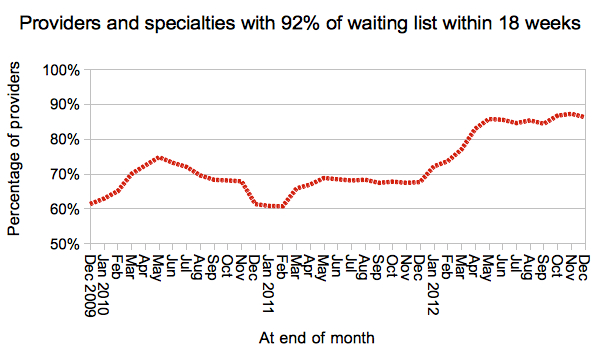 The top five are resolutely unchanged since last month, with RJAH and Clinicenta still keeping patients waiting much longer than anyone else.

The Trusts with the largest numbers of one-year-waiters are King’s (128), Guy’s and St Thomas’ (98), RJAH (97), Nottingham (86), Newcastle (66), and Bart’s (64). A total of 66 NHS Trusts have at least one patient waiting over a year, and they will want to correct that position before the ‘zero tolerance’ penalties begin in April.