Just before Christmas the new ‘zero tolerance’ penalties for one-year waiters were announced. From April, any provider reporting one-year-waiters on their waiting lists will be fined £5,000 for each patient, every month.

That’s pretty hefty, and you might expect providers to respond by trying to clear their one-year-waiters before the penalties kick in. These latest figures are for January, so they come only a few weeks after the penalties were announced and perhaps it is early days. Yes, one-year-waits came down, but this was really just a continuation of the reductions that started back in the summer of 2011.

Underlying it all, the total size of the waiting list remains high for the time of year, and the gap over previous years is still growing. Some of the increase may be caused by providers improving their record-keeping as the waiting-list-based targets phase in, and I’ll be looking into this shortly to see if we can quantify that effect.

All the statistics used in this analysis are published by the Department of Health, and you can download a fact-checker with all the time series here: NHS waiting times fact checker

The total number of patients on the waiting list is looking increasingly high for the time of year. 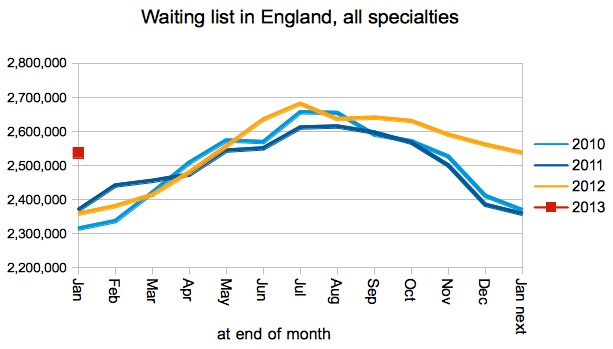 Admissions are still bang on trend. 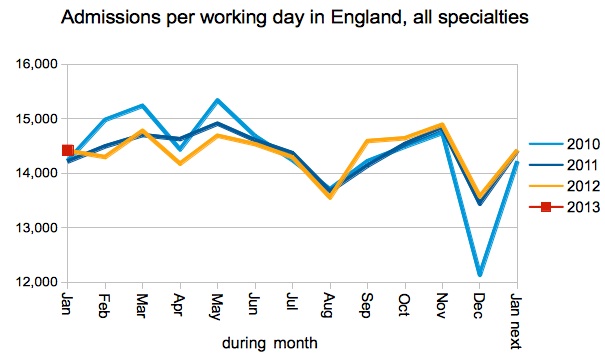 The welcome reduction has continued in the number of patients waiting more than a year after referral. No sign, yet, of an acceleration before the zero-tolerance penalties kick in. 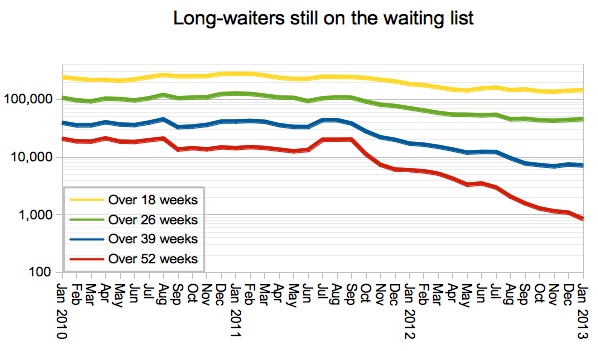 From April the main target will be that 92 per cent of patients on the waiting list must be within 18 weeks of referral. At national level this is still being met comfortably. 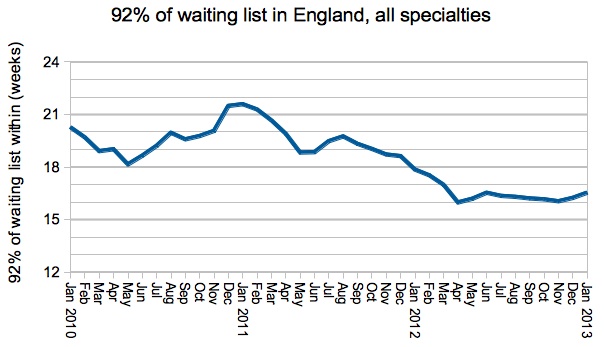 Dig a little deeper, to specialty level, and we see that long-wait specialties have been deteriorating since the start of winter. Among the big surgical specialties, Orthopaedics continues to drift away from target, and General Surgery is now flirting with failure. 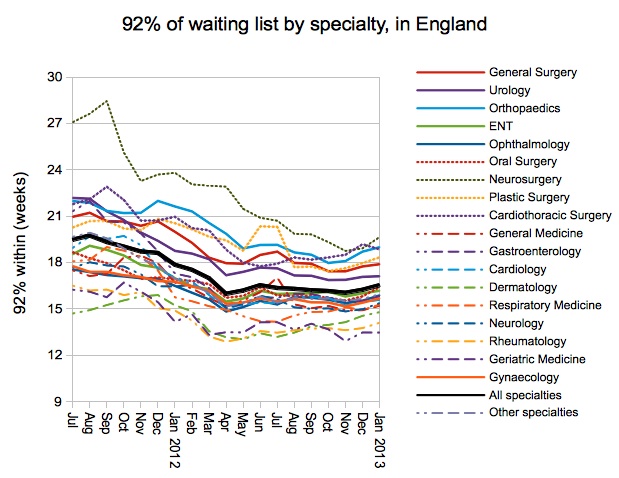 The new main target from April, that 92 per cent of the waiting list must be within 18 weeks, must be met in every specialty in every provider in every month. At the end of January, 86.1 per cent of provider-specialties were succeeding and this (like the other 18-week indicators) has remained steady. 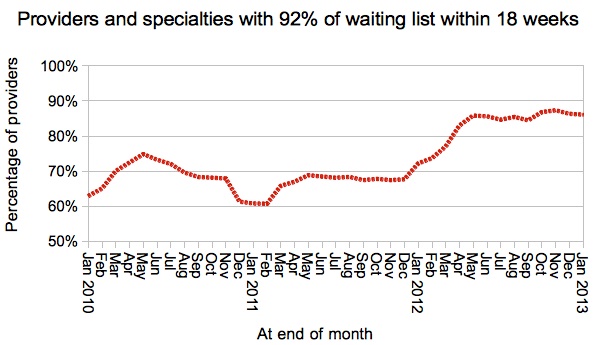 RJAH tops the list again, and its reported long-wait position is even worse than in December (when 92% of the waiting list was within 36.5 weeks, and there were 97 one-year-waiters). Despite having the worst waiting lists in England, they still managed to achieve the current headline target by choosing 90.1 per cent of their admitted patients from the short-waiting end of their waiting list. This is a (very nice, and popular) specialist orthopaedics hospital and it is possible that their very-long-waiters are concentrated in one sub-specialty. (In orthopaedics it is, for instance, common to find particular pressure in spinal surgery.) Still, though.

In the number 2 slot, Clinicenta are reporting far fewer one-year-waiters (they had 26 at the end of December).

The Trusts with the largest numbers of one-year-waiters are RJAH with 119, King’s 118, Guys/StThomas 63, Nottingham 59, Newcastle 39, Royal Orthopaedic 38, West Sussex 38, and Brighton 35. Some 64 Trusts reported any one-year-waiters, which is a small improvement from 66 Trusts in December.

Congratulations to those providers who dropped out of the table since last month, with 92nd centile incomplete pathway waits falling from: 18.2 weeks to 17.5 weeks at Nuffield Health, Leeds Hospital; from 18.9 to 17.9 at Doncaster and Bassetlaw Hospitals NHS Foundation Trust; and from 18.0 to 17.2 at Southport and Ormskirk Hospital NHS Trust.