In April there was another big rise in the number of patients on the English waiting list, on top of the sharp increase seen in March. The reported waiting list hasn’t been this big since May 2008 (i.e. before the 18-weeks target was officially met for the first time). Even after adjusting for counting changes, the waiting list is at its biggest for over three years.

This is worrying. Waiting times depend on the size of the waiting list and the order in which patients are treated, and the NHS needs to manage both. If the list carries on growing, then no amount of clever fire-fighting will hold waiting times down.

Why is the waiting list going up? The easy narrative is that winter was tough, operations were cancelled, and the NHS simply couldn’t get elective patients in because the beds were full. But that can’t be the explanation, because admissions have continued to follow the trend of recent years. Cancellations, although up, were still running at only 1.1 per cent between January and March which is not enough to make a serious dent in the figures (and is within the 0.7 to 1.2 per cent range seen in the quarterly stats over the last 6 years. So the increase must be in referrals (for which we unfortunately lack comparable published data).

There was good news as well. One-year-waiters continued to fall (to 388) and 18-weeks performance improved sharply, with both breaking new all-time record bests, as the new waiting-list-based penalties kicked in for both measures.

The reported list size is soaring, and is now the largest in nearly five years. But… 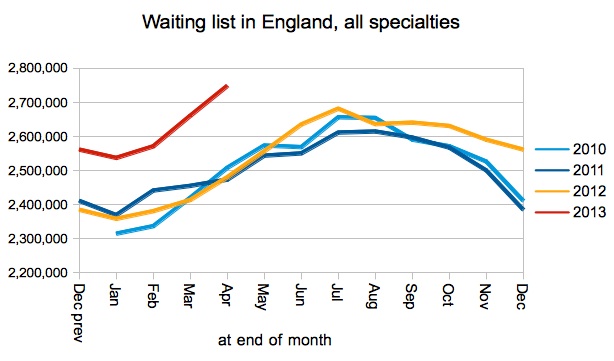 …the NHS has been improving its counting, and if you adjust for step changes in local list sizes then the annual trends are closer. Nonetheless, the recent increases still take us into record-breaking territory and the adjusted list size is bigger than we have seen in the last three years. If the list continues to grow, which would be expected on the usual seasonal pattern, then we will see further increases in the waiting list into the summer, and rising waiting times pressures around the country. 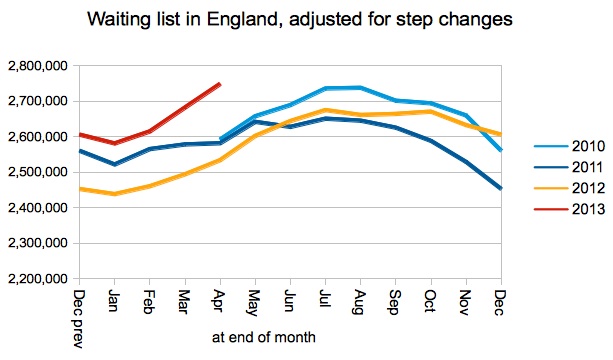 The growing list is not caused by a shortfall in admissions: they’re still on track. For a real winter crisis, take a look at the December 2010 figures when we had that really cold snap. 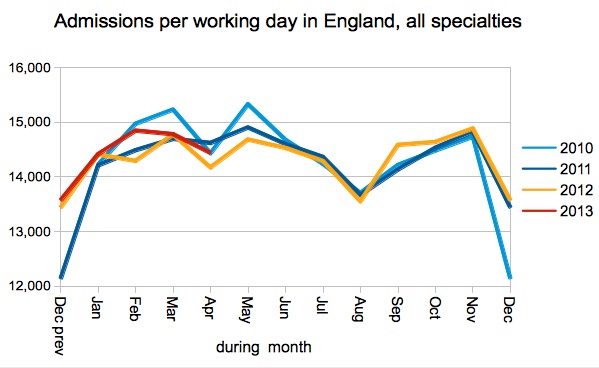 One year waiters continued to fall in response to the new zero-tolerance target. But 26-week waiters ticked up. 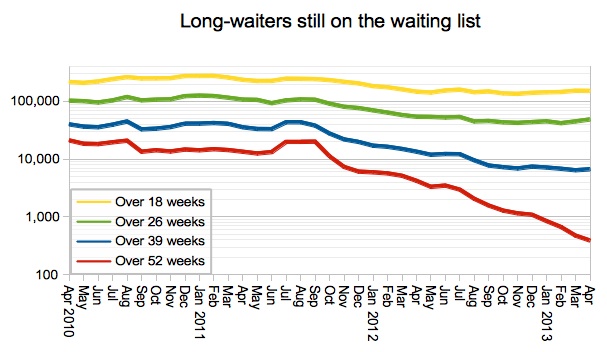 The 18-weeks targets changed in April, with the “92 per cent of incomplete pathways within 18 weeks” target coming to the fore. Performance has sharply improved in response, and the 92nd centile reached its best (lowest) ever recorded value. This change in targets should lead the NHS to achieve better overall performance on waiting times, offsetting to some extent the effect of the growing waiting list. 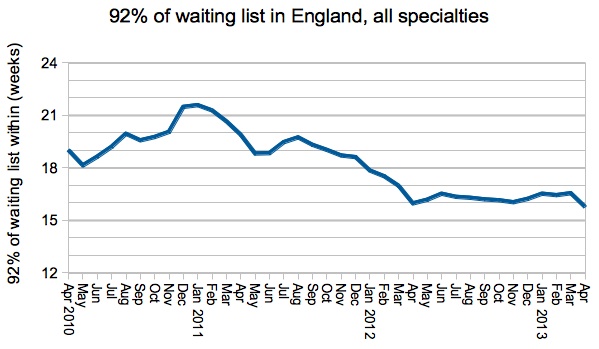 At specialty level, all the main specialties reflected the overall improvement in “92 per cent” performance. Orthopaedics, Neurosurgery, Plastics, and Cardiothoracic Surgery still missed the target at national level. 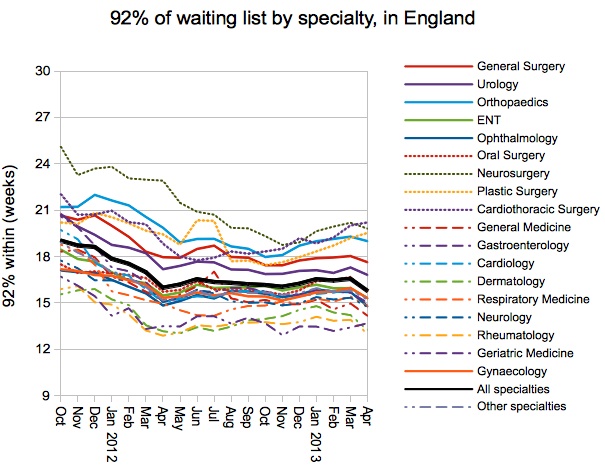 There was only a small increase in the proportion of specialties at provider level who achieved the ’92 per cent’ target. 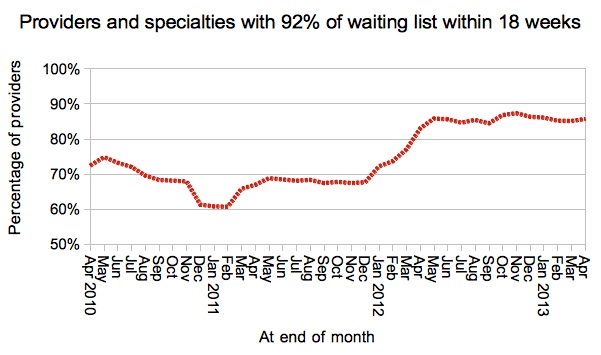 The Trusts with the largest numbers of one-year-waiters are RJAH with 52, King’s with 49, East Kent with 45, Barts with 43, The Whittington with 27, The Royal Orthopaedic with 24, East Cheshire with 12, and Doncaster with 10.

Well done Croydon Health Services NHS Trust, who reduced their 92nd centile waiting times from 18.7 to 15.3 weeks in April and fell from 8th to 87th in the rankings.

And finally a ‘welcome back’ to Bradford, who have started reporting incomplete pathways again after a long absence since September 2012.