The curious achievement of 18 weeks

The 18-week target was achieved in 2008, and has been maintained ever since. But for how much longer? The financial squeeze is putting waiting times under increasing pressure, and the Government and NHS are looking anxiously for signs that the 18 week target might be about to blow.

There are no definitive signs of this so far. But if there were, what would they be? In this post we will investigate whether the manner of the triumph might herald the manner of the fall: whether the way in which 18 weeks was achieved in the first place might hold some clues about how it might eventually unravel. As we shall see, some strange things happened as 18 weeks was achieved, and there is every chance they might happen again.

Let’s start with the official version. Here is the historical record, as published by National Statistics and the Department of Health: 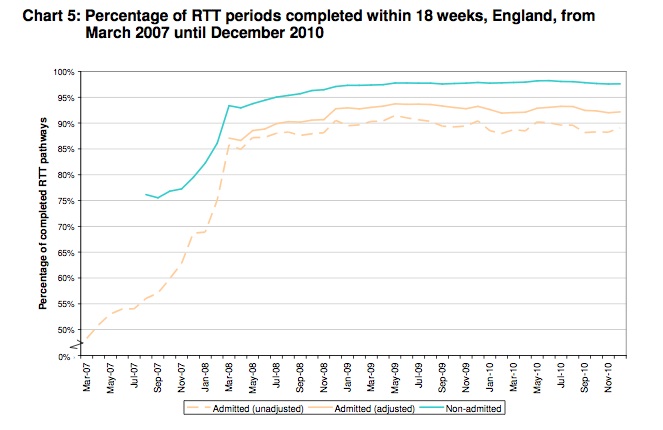 The headline target (that 90 per cent of admitted patients should be treated within 18 weeks) was achieved in June 2008 and has been achieved ever since. The most recent figures (up to December 2010) show no sign of approaching failure. So far so good.

But what about those patients who haven’t been treated yet, and are still on the waiting list? The official record shows: 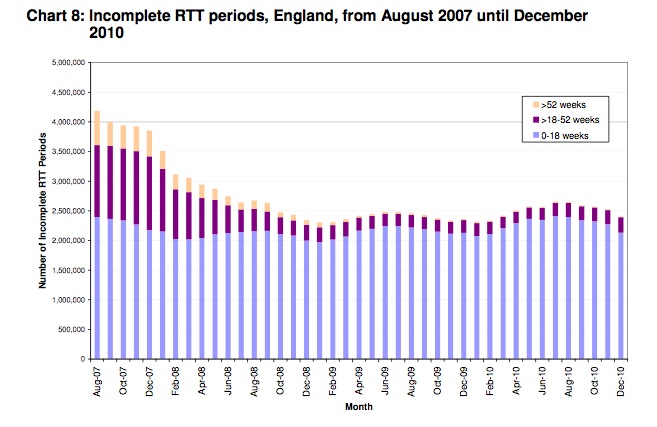 Again, everything looks rosy. Although if you look very closely, the number of over-18 week waiters does seem to be a little higher than in was a few months ago. It might be worth taking a closer look at this.

Instead of taking the 18 weeks bit of the target as our starting point, what happens if we take the 90 per cent bit? The next chart shows the time within which 90 per cent of English patients were admitted; it also shows, for those patients still waiting, up to how long 90 per cent have waited so far. We might expect the two lines to follow each other fairly closely; after all, if you are trying to bring down waiting times then you devote as much capacity as possible to the longest waiters, right? But in fact… 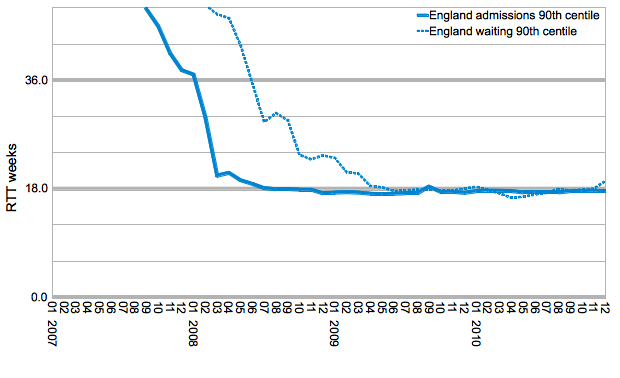 How curious. It looks as though there were still lots of patients waiting much longer than 18 weeks, when the target was achieved in mid-2008.

How can this be? It could be that some Trusts achieved the target by carefully admitting only 1 over-18-week-waiter for every 9 under-18-week-waiters, even if there were still plenty of patients waiting for ages. That would be a classic example of achieving the target but confounding the objective.

To find out, we need to drill down to Trust level. We’ll pick a Trust that achieved the headline target early, but still had long-waiters on the list. So the next chart shows data for June 2008, for the Countess of Chester Hospital NHS Foundation Trust, all specialties combined: 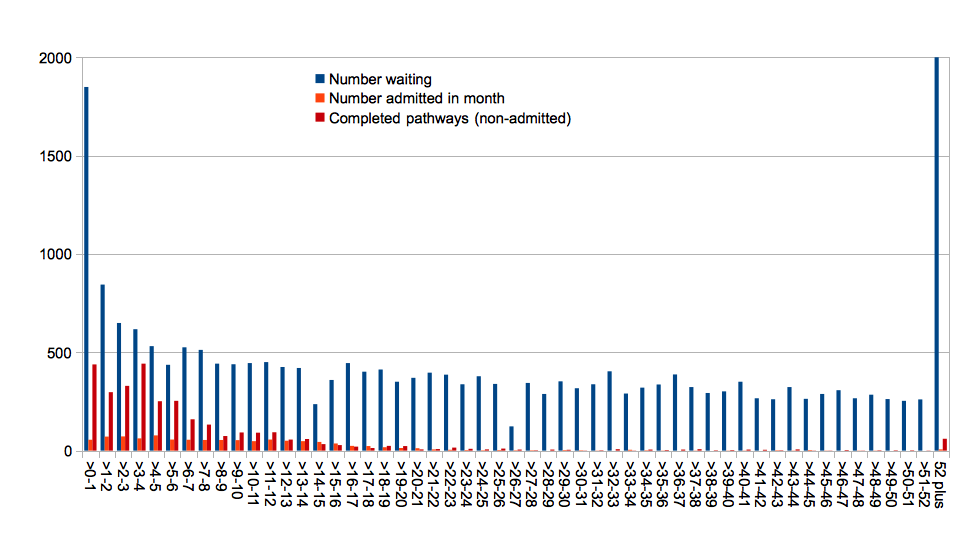 The over-52 weeks column for the number waiting doesn’t fit on the chart, and it’s 17,943 patients high. Three-quarters of the patients on the waiting list had been waiting more than 18 weeks. Yet this Trust was “achieving” the headline target, with 90.8 per cent of admitted patients being treated within 18 weeks.

If the objective were genuinely to achieve short waiting times for patients, you would expect as much capacity as possible to be directed towards the longest-waiters (while protecting clinical priorities). Instead the headline target throttles it, limiting to 10 per cent the capacity devoted to over-18-week-waiters.

We can only learn so much by looking at a single Trust. So let’s look at the picture across the whole of England.

While the video is running (it’s only 2 minutes long), notice two things: firstly, the blue points falling like rain in early 2008 to “achieve the target”; secondly, watch where the red line crosses the 18-week gridline, and how it moves to the right much later as waiting times genuinely improve. 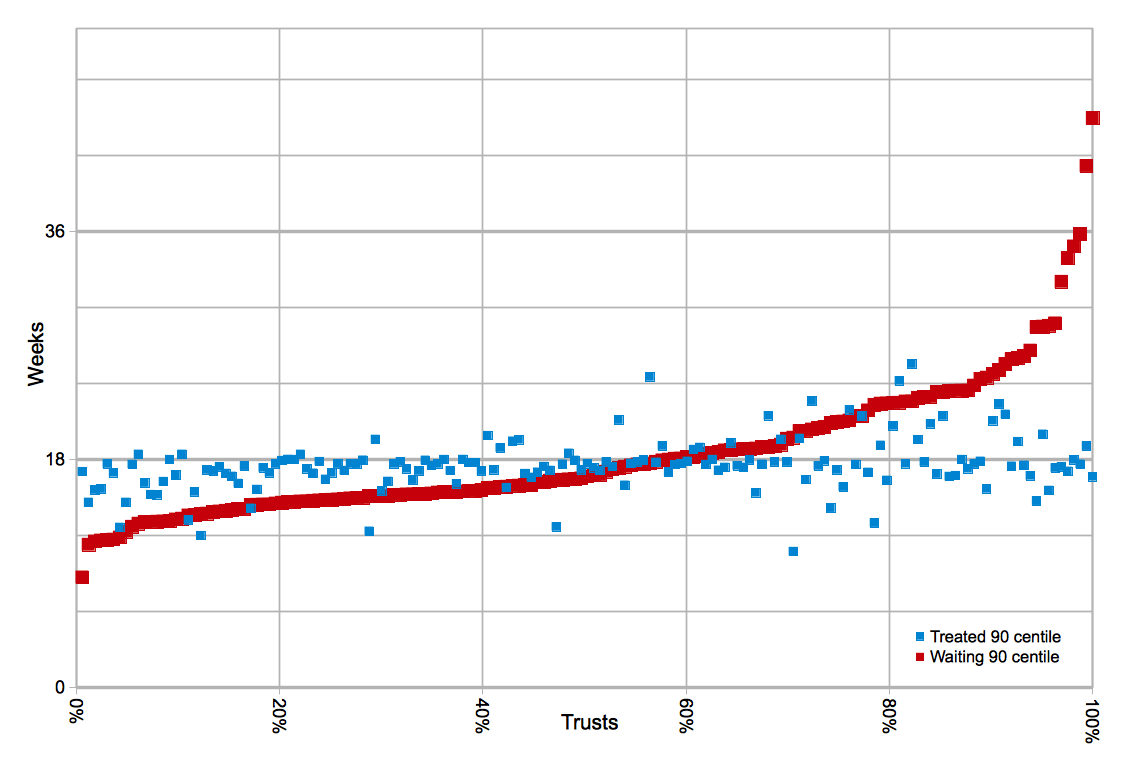 December 2010 chart from the video

There are still some Trusts where 10 per cent of still-waiting patients have already waited more than 30 weeks. None of these Trusts is devoting a high proportion of capacity to long-waiters. Those six Trusts are (starting at the top right):

The place where the red line crosses 18 weeks is an interesting indicator, and it shows how many Trusts are achieving 90 per cent of patients waiting less than 18 weeks. Let’s look at the trend for this indicator: 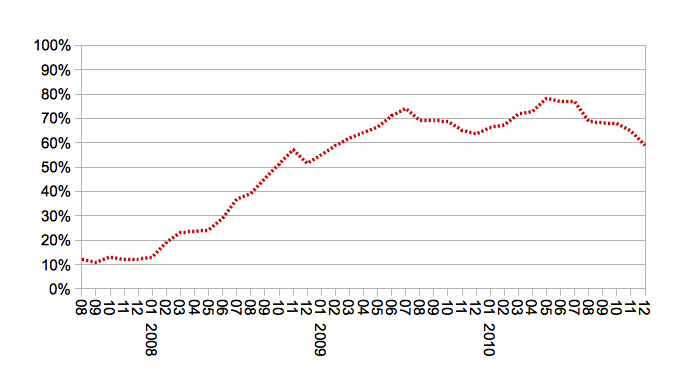 Where the red dots cross 18 weeks

Is this a sign that 18 weeks is doomed? No; we need to wait and see what the future data holds. Is this a good indicator to watch? Quite possibly.

We have seen how Trusts were able to achieve the headline admitted-patients target in 2008, even though their waiting list backlogs were still very long. So it would be unwise to look at the admitted patient (or for that matter the non-admitted patient) records as reliable early indicators of mounting pressures on 18 weeks.

Instead, the patients who are still waiting are a better place to look: the so-called incomplete pathways. Even though 18 weeks remains “achieved”, the English waiting list still contains 14,637 patients who have waited over 52 weeks since referral. And because there is such variation between Trusts, we need to be looking at the whole spectrum of Trusts to pick up the early indicators; 18 week pressures will not build up evenly.