Yesterday I showed how NHS waiting times are reported upside-down: when waiting times get better, the headlines scream disaster. Today I am going to move beyond finding fault with journalists. There are, after all, plenty of things wrong in the real world of NHS waiting times, and once we start focusing on the right numbers there are lots of reasons to hold the government and the NHS to account.

So here are the stories that might be reported more. They have not been entirely ignored in the past, but neither have they been given the prominence they deserve.

There are plenty of hospitals around England with very long waiting times. In some cases, patients are still waiting more than a year after being referred by their GPs.

This map (click it for the interactive version) shows the top 100 waiting time pressures, by hospital and specialty. Because it’s based on the so-called “incomplete pathways” it shows long-waiters who are still on the waiting list. 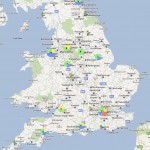 The Guardian gave an excellent report on the Trust with the worst pressures in their piece on the June waiting time figures. There is plenty of scope for holding the NHS to account for these long-waits, once we start focusing on incomplete pathways instead of admissions.

2) Long waiting times that are not being dealt with

What is much worse is that the NHS is actually being forced to make patients wait instead of treating them.

It isn’t necessarily the hospital’s fault if its waiting times have grown. If referrals are pouring in, but the Trust isn’t being paid to treat them all, then waiting lists will grow and so will waiting times. This supply/demand balance is a well-worn subject that I won’t go into here.

What I do want to highlight is that different hospitals respond to this problem in different ways. Some do their best to fix the problem, by treating as many of the longest-waiters as possible and making sure no patient is left waiting indefinitely. But others don’t do this, preferring instead to let their waiting list grow a long tail of abandoned patients. Why?

It is hard to blame the hospitals. They know that if they treat their long-waiters then they will fail against the headline waiting times target. In upside-down fashion this target limits, to one patient in ten, the number of over-18-week waiters they are allowed to treat. Under the standard NHS contract they can be fined heavily if they do not comply. This admission-based target is a serious policy error that the current Government should be taken to task over (unfortunately they inherited it from the current Opposition, so expect no challenge from that direction).

So where are these hospitals, who “achieve the target” while long-waiters languish on their waiting lists? Here is an interactive map that picks them out; it shows those hospital specialties where 90 per cent of admissions waited under 18 weeks, but more than 10 per cent of incomplete pathways (i.e. of the waiting list) had waited over 22 weeks. 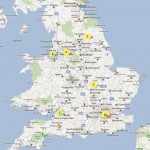 Trusts with long-waits who achieve the target

The Government is trying to push the emphasis away from long-waiters onto “average” (by which they mean “median”) waiting times for admitted patients. In this case the problem is not the focus on admitted patients, but the way that medians are being targeted.

The main waiting list specialties are surgical specialties where the majority of patients are “routines” (not clinically urgent). If you took all the admitted patients and sorted them in order of waiting times, then the middle (i.e. median) patient would be a routine patient. So would all the patients who waited longer than the median, including the longest-waiting patient and the 95th centile patient.

Routine patients generally have no clinical reason to jump the queue on other routine patients. So natural fairness (as well as good waiting list management) says you should admit routine patients on a first-come-first-served basis as far as possible. Do that, and all routine patients will experience roughly the same waiting time, including the median and 95th centile patients.

So in a well-managed waiting list, the median and 95th centile waiting times should be quite close together. If they aren’t, that is a sign that many routine patients are jumping the queue. And we know that queue-jumping by some people leads to longer waiting times for others. So if you lower the median waiting time for admitted patients, as the Government wishes, then the maximum wait will go up: another example of an upside-down Government target having unintended consequences.

The Government’s thinking on median waiting times sets the clock back to the 1990s, when the (Conservative) Government used to cheer the high number of patients admitted within 3 months, at the same time as others were waiting up to 2 years. I thought we had moved on from those days, but sadly it seems we must fight this battle all over again.

Sometimes hospitals can be under such pressure to achieve 18 weeks that they find it difficult to admit urgent patients quickly enough. This can happen, for instance, if they are using PTLs (a common management technique for achieving 18 weeks, currently being promoted by the Department of Health’s Intensive Support Teams). Delaying urgent patients is a serious matter because it causes a clinical risk to them.

Delaying urgent patients is directly addressed through the cancer waiting times targets set by the government. But not all urgent patients have cancer, and cancer delays can happen by cancelling follow-up appointments as well as by delaying the first clinic appointment. So it is worth being alert to the possibility that urgent patients could be delayed when investigating services with severe waiting time pressures.

There is plenty to get our teeth into, once we all stop distracting ourselves with irrelevant figures and upside-down targets. There are plenty of long-waiting patients still on the waiting list, plenty of policy errors, plenty of potential risks to patients to be reported and challenged. The best journalists are already picking these up. Now let’s give them the fuller attention they deserve.