Why do elective admissions go up and down like a yo-yo? And why is the pattern apparently so seasonal? It’s a big effect, as this chart of English RTT admissions shows: 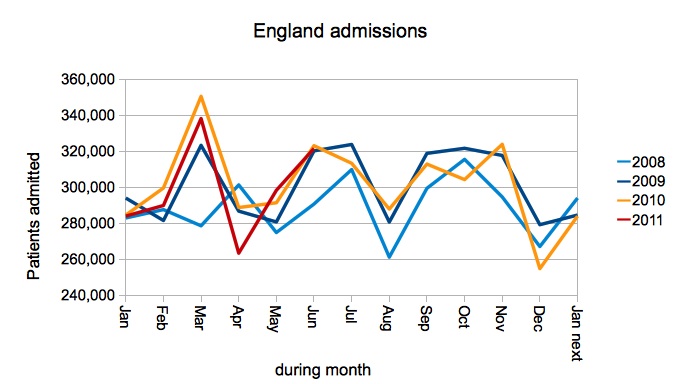 It’s pretty striking: a trough-to-peak variation of around 25 per cent. And the pattern repeats fairly regularly, rising and falling in the same months every year. What is happening?

Fortunately, a smoking gun is lying in plain view. Take a look at this: 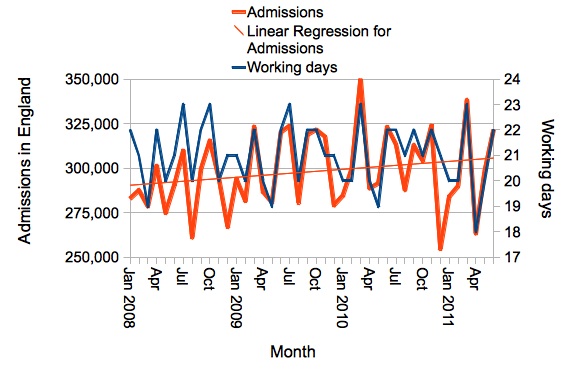 The orange line (using the left hand scale) is the number of patients admitted each month (from the Department of Health RTT site). It has an upward trend because the NHS is treating more patients each year; the trend is 1.5 per cent per year, and shows no sign of reversing in the age of austerity.

The blue line (using the right hand scale) is the number of working days each month (from work-day.co.uk). Working days, of course, do not have a year-on-year trend, though they do vary a lot from month to month. In April 2011, for instance, there were only 18 working days. That’s 30 days in total, minus 9 weekend days (the 30th April was a Saturday), Good Friday, Easter Monday, and the Royal Wedding.

And look. When you adjust the left and right hand scales carefully, as in the chart above, the lines are pretty close. From March to June 2011 they sit absolutely on top of each other.

There are some exceptions in the pattern. There are fewer admissions than you might expect in December, which is almost entirely explained by the NHS not running elective lists between Christmas and New Year (which knocks off another 3 days); no need to look for factors such as extreme weather and influenza putting pressure on the NHS. Also August sees an extra dip, because so many staff take their summer holidays then. But otherwise, the number of admissions looks as predictable as a calendar.