Ever feel you can’t cope with your waiting list problems? Do you have complex and significant ‘system issues’ to address?

Then why not take a holiday?

That’s right, for a limited time only, you can take a ‘reporting break’ absolutely free! So don’t publicise those long-waiters, keep them to yourself for a while. Relax, you’re on holiday!

(Contact your local commissioner and the Department of Health for further details. Offer subject to status.)

Imperial are taking a holiday. We don’t know exactly why, but if an anonymous comment in the HSJ is to be believed then it is not an IT problem.

Who stands to benefit? Imperial, certainly. But what about the other parties involved?

Imperial says the ‘reporting break’ has already been discussed with NHS North West London and NHS London. The HSJ quotes a relaxed-sounding Department of Health. Do they stand to benefit? If Imperial takes a break, do the long-waiters drop out of the commissioner-side figures too? Would the potential for a waiting times breach at NHS London, noted by the HSJ, be avoided? 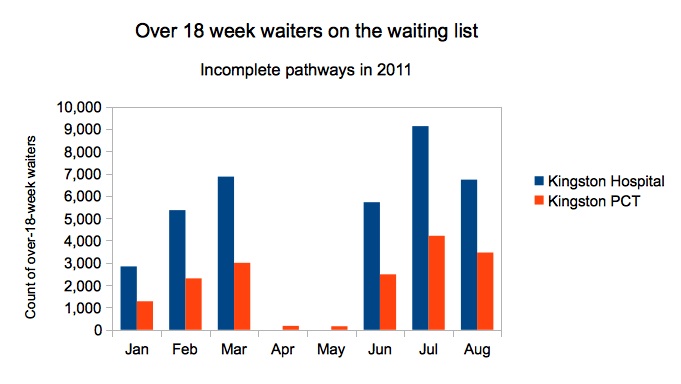 This evidence suggests that Imperial’s reporting break could flatter the commissioner-side figures as well as their own, to the benefit of their PCT Cluster, NHS London, and the Department of Health.

Could it make the difference between success and breach at SHA level? It certainly could. If we look at the adjusted admitted pathways statistics for November 2011, we can see that NHS London achieved 90.3 per cent of admissions within 18 weeks, which turns out to be only 151 admitted patients clear of the 90 per cent target. So if Imperial clears its backlog, then it could easily cause NHS London to breach.

This is yet another illustration of the damage caused by the current admitted-patients target, which has recently been extended for another year by the Department of Health. Under a saner target regime the Trust and its commissioners would be keen to clear genuine long-waiters by treating them. But under the current perverse regime of treatment-based penalties and performance management, they are afraid to do so openly. This, then, is a possible motive for the reporting break.

What should be done differently? Firstly, Imperial should change its mind about taking a reporting break; let’s have all the figures out in the open, even if they aren’t perfect. Secondly, let’s ditch the treatment-based target regime, which Ministers accept is perverse, and move over to the new “92 per cent of the waiting list within 18 weeks” target right away. Thirdly, let’s see the Department of Health standing up for transparency in public services, instead of giving the nod to this extraordinary suspension of reporting.

Update on 16 Feb 2012: Imperial has started its holiday early, with permission from NHS London. They did not submit any data for the December 2011 RTT waiting times statistics published today.