Since the General Election all those indicators are also improved, except for over-18-week waiters which are slightly higher by a mere 94 patients (0.04 per cent).

The caveats? Referral restrictions mean that some patients are being barred or delayed from showing up on the waiting list, and so these figures may understate the backlog. Also two Trusts did not submit data; both Imperial and the RJAH are known to have difficulties with their waiting lists, so quite a lot of long-waiters may be concealed there.

But on the strength of the figures, if Ed Miliband wanted to tackle David Cameron over waiting times again, what on earth could he say? He could complain that the number of inpatients who waited over 18 weeks is up 13 per cent year-on-year, or 9 per cent since the Election, but (as I explained recently on Radio 4’s PM; here at 20m30s) that would be perverse. It might even backfire, if David Cameron is briefed correctly by the Department of Health:

David Cameron: But those figures show that the NHS is treating its long-waiting patients. I’ll tell him what’s happening to waiting lists: total number waiting, down year-on-year; over-18-week waiters, down 24 per cent; over-one-year waiters, down 37 per cent year-on-year. His government punished hospitals for treating long-waiters, we’re making sure they come off the waiting list and onto the operating table.

Ed Miliband: Aren’t you going to mumble defensively about median waiting times like you normally do?

Ed Miliband: Oh sugar. How much did he pay you for that one?

The number of patients admitted from the waiting list continues to track the seasonal trend of recent years: 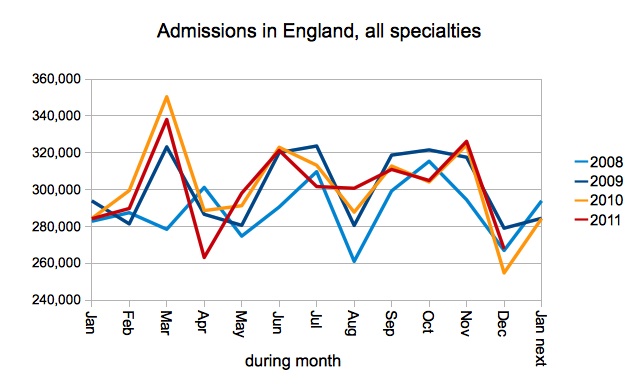 So does the total number of patients on the English waiting list: 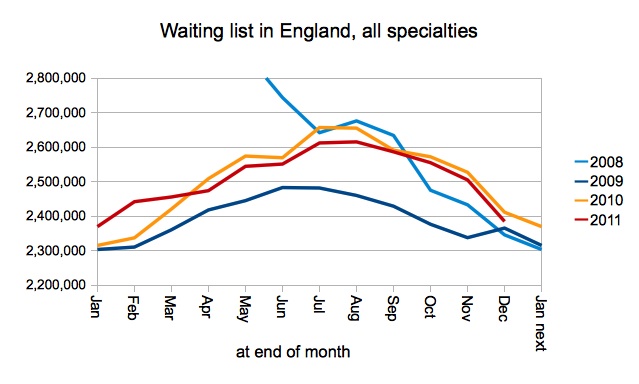 The NHS’s new target (that 92 per cent of the waiting list must be within 18 weeks) is looking good, and is not rising as it did this time last year. So the NHS is on course for achieving this target at national level when performance management starts in April. 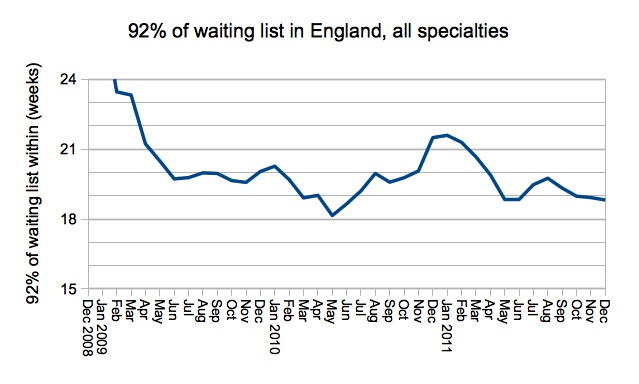 The picture is similar at specialty level, but watch out for Orthopaedics in the coming months as it is starting to rise again. 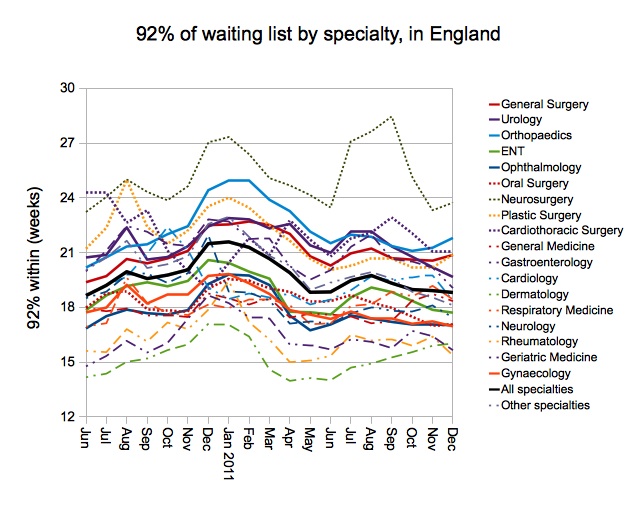 The new 92 per cent target must be met by every Trust in every specialty, and the proportion of Trust-specialties already achieving it has declined slightly (but not to the extent that it sagged last year): 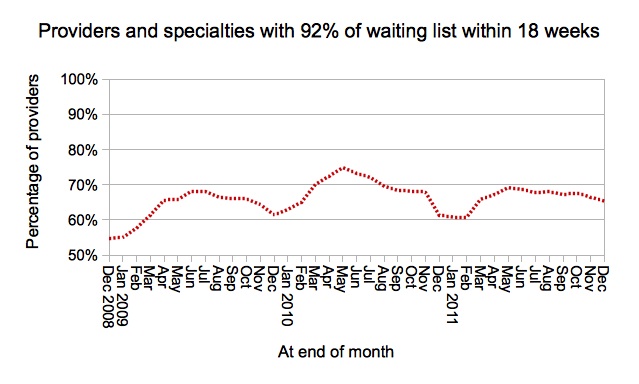 Every month we run a list of the top twenty Trusts who are furthest from the new 92 per cent target. This month Imperial and the RJAH are missing from the series, but here is the list based on the rest:

The next data release will be the January 2012 data, and will be published by the Department of Health at 9:30am on Thursday 15 March 2012.