The NHS in England continued its winning streak on waiting times, with record-breaking performance showing through on the latest (January 2012) figures. It’s an impressive result, especially for the middle of winter. The NHS notched up:

Caveats? Yes. The main standing caveat is that GP referrals are being limited in some areas, and this may be holding up patients before they appear on the waiting list. There is also a specific issue with the January 2012 data, because two Trusts (Imperial, and the RJAH Orthopaedic) again failed to submit data. However, even if you add those Trusts’ November 2011 figures back in, and make a guesstimate of the true long-wait position at the RJAH Orthopaedic, the 92 per cent target is still met England-wide.

Is there any bad news?

Well, you could point to the number patients admitted, who had waited over 18 weeks on admission; that is up since the General Election. But treating long-waiters is a good thing, surely; better than letting them wait. So a better criticism might be that the NHS treated (very slightly) fewer over-18-week waiters than a year previously (though the numbers are so small that the absence of Imperial and RJAH would tip it).

Or you could point to median waits being up since the General Election, on all three measures (admitted, non-admitted, and incomplete pathways). But then you’d have to explain whether that was really a bad thing, given that rising median waits could indicate less queue-jumping by non-urgent patients.

[UPDATE: As it happens, Andy Burnham MP, Labour’s Shadow Health Secretary, did make exactly those two points, a couple of hours after this blog post was first published on the HSJ website.]

Or you could go for the proportion of Trust-specialties who are achieving the new 92 per cent waiting-list-based target: this was 71 per cent in January, which is below the 75 per cent peak set at the time of the General Election (see chart below). Perhaps that might be the one to aim for.

Admissions from the waiting list were up, mainly because January had 21 working days this year and there were only 20 last year and the year before. 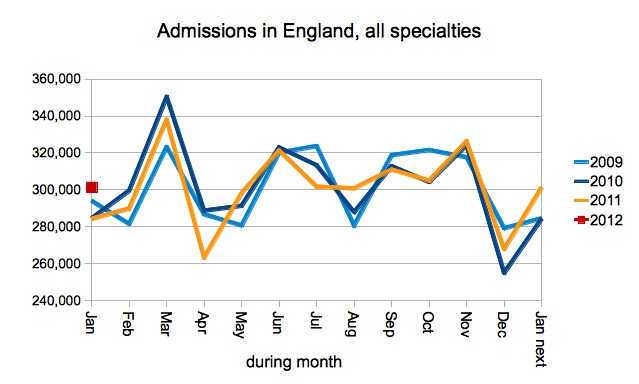 The total number of patients on the waiting list continues to track the seasonal trend with uncanny accuracy. 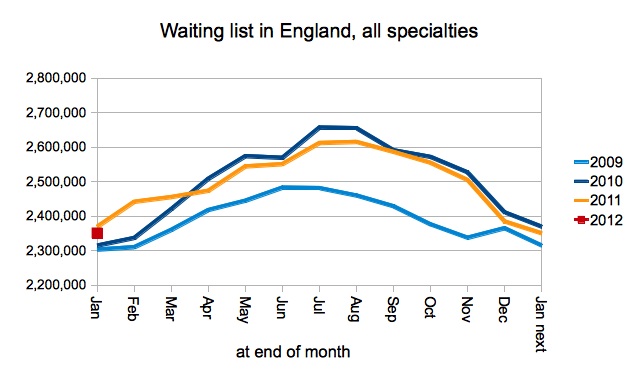 The new and better target, that 92 per cent of the waiting list must be within 18 weeks, has been met for the first time. Performance is also much better than normal for a January, and the new emphasis on long-waits still waiting is clearly having an effect. 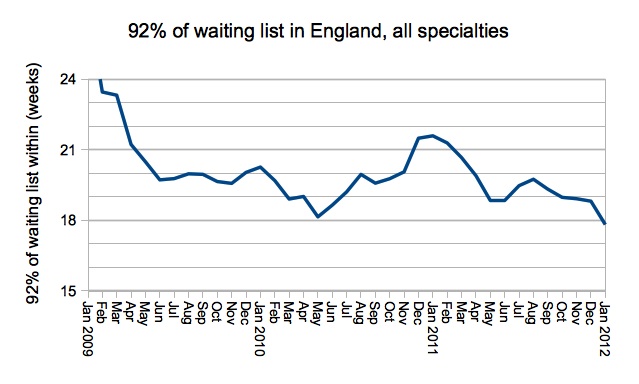 At specialty level, all the big surgical specialties are heading in the right direction too. Neurosurgery continues to worry; it has long been the most-pressured specialty, and is currently drifting slowly in the wrong direction. 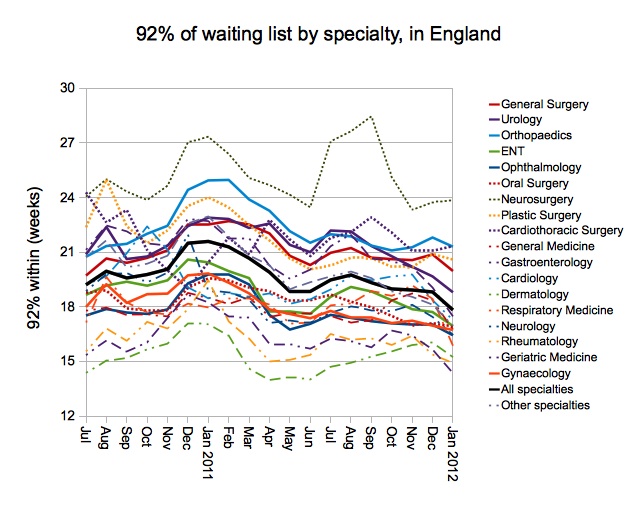 In 2012-13 the 18-week targets will need to be met in every specialty in every Trust, and the next chart shows how many of the 2,236 Trust-specialty combinations that have a decent volume of work are succeeding. The success rate has ticked up nicely, but still falls short of the record set at the time of the General Election. 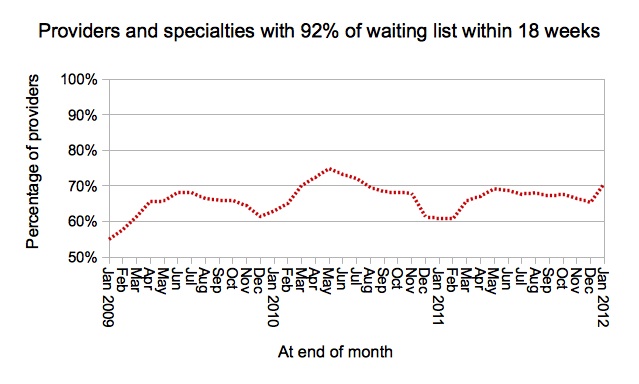 The twenty Trusts with the greatest waiting time pressures (omitting Imperial and RJAH who did not submit data) are:

Congratulations are in order for Wirral University Teaching Hospital NHS Foundation Trust. Last month they were at number 2, now they have sorted things out and dropped off the table completely.