The NHS in England met all its 18-week waiting times targets again in February, consolidating January’s first-ever success on all three measures. Although long-waits are improving in the run-up to April’s new target, the overall number on the waiting list remains unchanged compared with recent years.

The number of over-one-year waiters on the waiting list fell again to a new record low, but progress is slowing as the blitz on validating long-waiters runs out of steam. Sure, 5,696 over-one-year waiters is a lot better than 14,880 the year before, but it’s still 5,696 too many. When the NHS admits 50 times as many patients every month, why are these patients still on the waiting list? Also, why are so many (2,132) in London?

For all the stats and time trends, you can download our updated waiting times fact checker here.

Imperial are still on a reporting holiday, but we welcome the Robert Jones and Agnes Hunt orthopaedic hospital back to the data series (minus the suspicious hill in the middle of their waiting list); it is much better to have those one-year-waiters where everybody can see them, than to risk them dropping out of sight and out of mind.

Apart from that there are the usual caveats: the data excludes patients who are being held up by referral restrictions, and backlogs that may be building up for post-treatment follow-up.

Both admissions and the total list size continue to track the trajectories of recent years. No sign of austerity hitting overall activity, nor of the NHS reducing waiting lists below their current level. 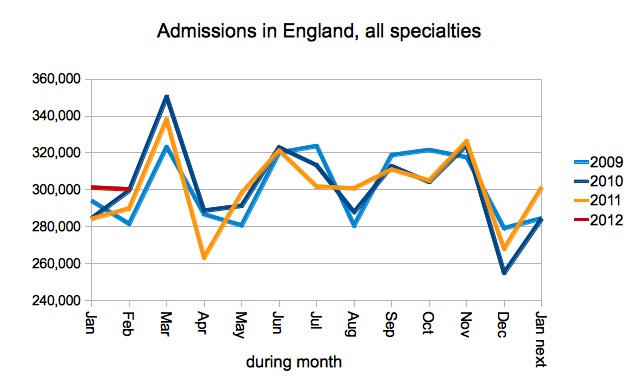 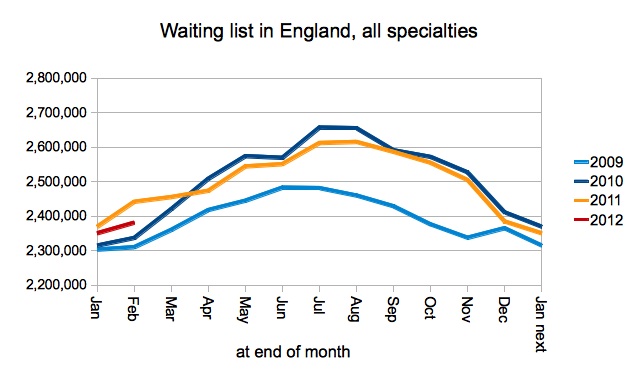 The new target, that 92 per cent of the waiting list (incomplete pathways) must be below 18 weeks RTT, starts  in April. At national level the NHS achieved it ahead of time in January, and has continued this improvement in February. 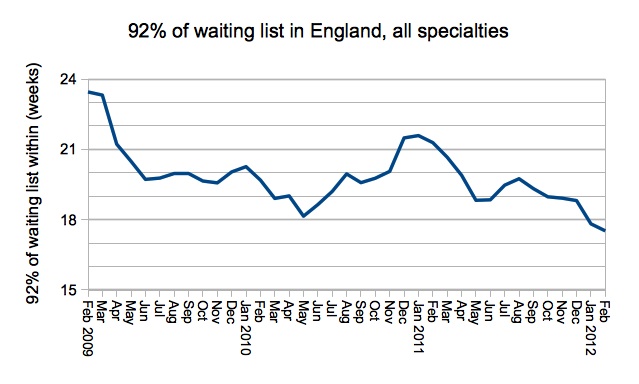 All major specialties reported improvement against this measure, except Orthopaedics which roughly maintained its position. 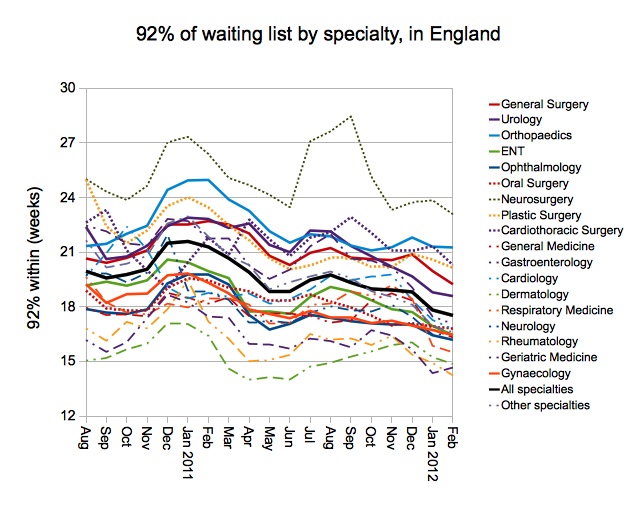 The new target must be met in every specialty and in every NHS organisation and, although more services are getting there, some 28 per cent of Trust-specialties are still below target. Expect this number to improve sharply over the next two months as Trusts scramble to avoid the “performance management” thumbscrews. 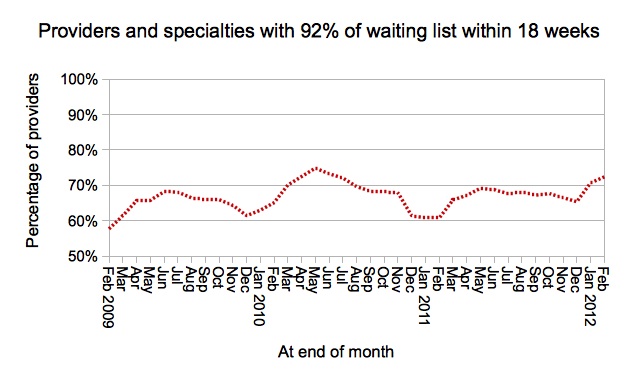 The twenty Trusts with the greatest waiting time pressures (omitting Imperial who did not submit data) are:

Congratulations are in order to the following Trusts for dropping out of the table altogether with big reductions in long-waits: Weston (whose 92nd centile fell from 24.9 to 16.9 weeks); Great Ormond Street (25.5 to 20.1), and Staffordshire and Stoke on Trent Partnership (with a whopping 23.4 to 12.1 week reduction).

The next 18-weeks statistics release from the Department of Health is expected at 9:30am on Thursday 17 May.