Usually when Celtic nations borrow ideas from the English, they pick the best bits and leave the not-so-good stuff behind. Not this time. Scotland has just “achieved” its first 18-weeks referral-to-treatment (RTT) target, but this success is an illusion. Behind a distorting target, long-waits are shooting up at an astonishing rate.

As if that isn’t bad enough, the NHS in Scotland is also enduring a torrent of headlines about the Lothian waiting times scandal, with lurid tales of inappropriate offers, staff suspensions, fiddles, and bullying. Anyone outside Scotland, wanting to see from a safe distance just how nasty a waiting list scandal can get, should take a look (before checking out the antidote here).

How did it go so wrong?

Fundamentally, Scotland picked the wrong target. It copied the headline English target (that 90 per cent of completed patient journeys must be within 18 weeks RTT, adjusted for periods of patient unavailability). As in England, any Health Board can achieve the target simply by refusing to treat patients who have already passed the 18-week mark. And that, it seems, is exactly what has happened.

The Scottish Government wanted the 90 per cent target met by December 2011, and right on cue the NHS achieved 92 per cent. But they achieved it by suppressing the number of long-waiters being treated to a record low (figures from Table 1 here): 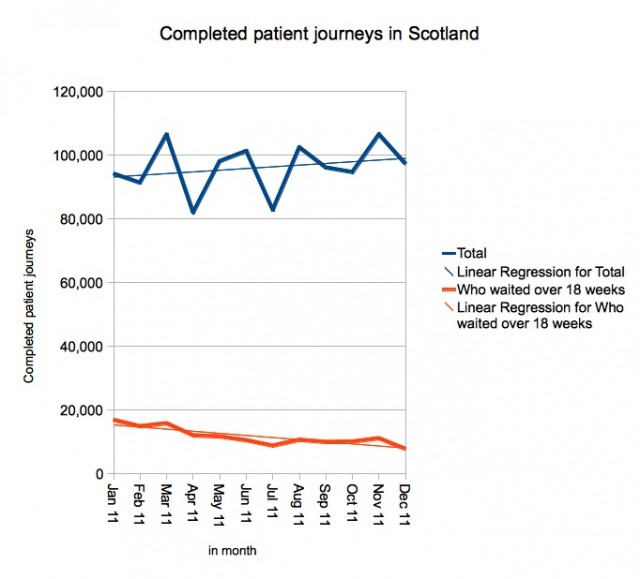 This would be fine, if it were genuinely the result of having fewer long-waiters still on the waiting list. But the opposite is true. We cannot make a direct comparison on a RTT basis because (unlike England) Scotland does not publish RTT figures about the waiting list itself. But there is data available for the separate outpatient and inpatient/daycase stages of the patient journey, and the official charts (reproduced below) could hardly show more starkly how the number of long-waiting patients still on the list is going up like a rocket. 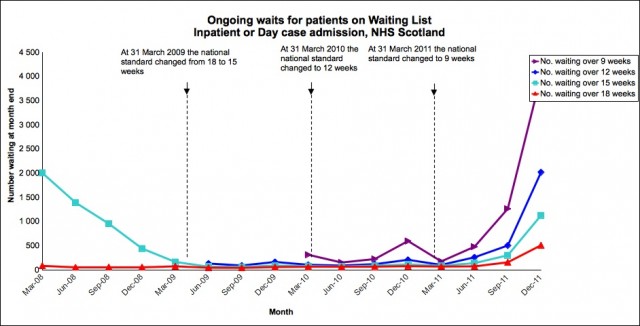 It doesn’t look any prettier in raw numbers. Year on year, the number of patients still on the waiting list over 12 weeks went up from 1,769 to 6,141 for new outpatients, and from 210 to 2,019 for inpatients and daycases. The big numbers are concentrated in Lothian (as patients wrongly declared “unavailable” are returned to the waiting list), but there are sharp increases in other Health Boards too, showing that this is not a Lothian-specific phenomenon.

It is such a pity. These outpatient and inpatient/daycase targets, which apply to patients who are still on the waiting list, were meant to be the magic bullet that would stop backlogs building up, and stop the Scottish referral-to-treatment target from distorting waiting times as they did in England. But the backstop has failed. The distorting target won, it prevents Health Boards from treating enough long-waiters, and so the number of long-waiters still on the waiting list is going up.

Are there any plans to sort this out? The Scottish Government will take half a step in the right direction, with a 12 week legal guarantee covering some inpatients and daycases due to start in the autumn. But putting a small patch on a weakened backstop will not fix the underlying problem.

Instead, Scotland should look across the border and learn again from England’s mistakes. The new English target is the one to copy: that 92 per cent of patients still waiting must be below 18 weeks, on a referral-to-treatment basis and without adjustment for patient unavailability.

Even better, Scotland could do it first. Although English Health Ministers have accepted the logic of a waiting list based target, and gone to all the trouble of creating one, they have bizarrely delayed its full implementation until at least April 2013. Scottish Ministers could switch targets now, and rapidly achieve and sustain the genuine short-waits that they wanted in the first place.