The long view on long waits

Everybody knows that the last Labour Government brought waiting times down from 18 months (just for the inpatient wait) to 18 weeks (for the entire referral to treatment pathway); an amazing achievement that transformed patients’ experiences of the NHS.

Everybody also knows that the Coalition Government abandoned those targets, whereupon waiting times promptly shot up, so they re-introduced the targets and then waiting times, er… carried on going up, or came down again or something.

Time to look at the facts. The following chart shows the number of long-waiters who were still waiting at the end of every month, since referral-to-treatment records of the waiting list began in August 2007: 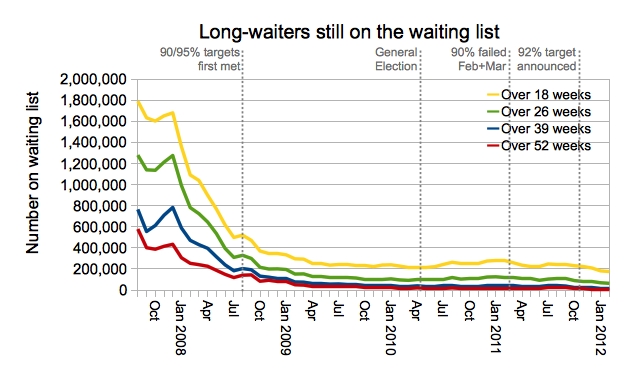 The scale of success in achieving the NHS Constitution targets (that 90% of admitted and 95% of non-admitted patients must be within 18 weeks) is clear. The number of long-waiters on the list was genuinely and dramatically reduced from millions to a few hundred thousand. The total number waiting was reduced too, but interestingly the improvement was efficiently confined to the long-waiting part of the list only, as the next chart shows: 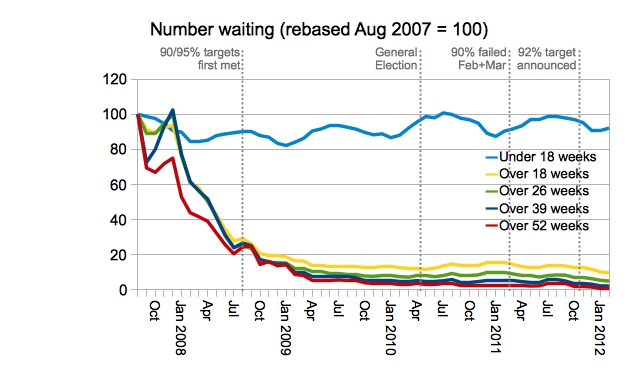 To find out what happened after the NHS Constitution targets were met, let’s zoom in on those long-waiters: 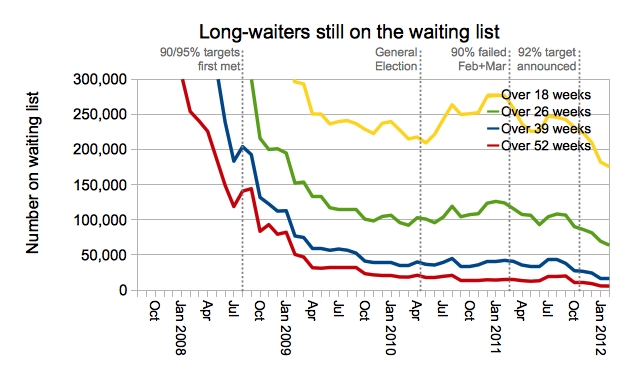 After the targets were met, there was a catch-up period while the target was achieved “properly”. This took nearly a year and was finally achieved in June 2009. Although long-waits did improve a bit after that, the pace was much slower. The NHS heaved a collective sigh of relief and maintained the target position.

Then came the General Election, and the “abolition” of the targets (in fact, merely the ending of central performance management). The number of long-waiters over 18 and 26 weeks promptly went up a bit (very long waits over 39 and 52 weeks were not so much affected). Eventually the 18-week backlog reached the point where even the misleading NHS Constitution targets could no longer be held, and the headline target was breached for two months running.

That first winter was the post-election low point, and it led a few months later to the Government introducing (for the first time since referral-to-treatment targets were created) a new target to reduce long-waiters who are still on the waiting list. This was a good decision as it addresses the issue of long-waiting more directly. Even though the new waiting-list-based target only came into force at the start of April 2012, and is only partially implemented in this financial year, the Government has been swiftly rewarded with sharp reductions in long-waiters and the NHS breaking new records across the board.

The recent improvements, welcome though they are, seem rather small beer in comparison with the original achievement of 18 weeks. The gains made under Labour were so large; what could the Coalition Government do to match them? Plenty, in fact: as Anthony McKeever and I suggested in November, abolishing over-one-year waits would transform public perceptions of the NHS and correct a long-standing unfairness. And then… but perhaps we shall leave the other possibilities for another blog post.

All data from the Department of Health, via our monthly waiting times fact checker spreadsheet.