Of all the referral-to-treatment (RTT) waiting times targets, the toughest is currently the “90 per cent” target. This requires 90 per cent of patients to have waited less than 18 weeks as they are admitted, on an adjusted basis. Adjusted, that is, for clock pauses.

I must confess, I had always assumed that clock pauses have only a minor effect. There might be one or two Trusts, I thought, where clock pauses were (shall we say) giving the adjusted admitted target a fair wind. So I was really quite taken aback when I looked at the evidence.

Clock pauses are only allowed in limited and defined circumstances. According to the RTT Rules Suite (p.22, my emphasis):

Clocks may only be paused for patient initiated delays at the admission for treatment stage of the waiting time pathway.

Once a decision to admit has been made, patients should, of course, be offered the earliest available dates to come in, as appropriate. However, where patients decline these offers, then, for a clock to be paused, they must be offered at least 2 reasonable dates for admission. Reasonable is defined as an offer of an appointment with at least 3 weeks notice.

Not much scope, you might think, for widespread pausing, or for provider-initiated pausing to help achieve the target. So how much are clock pauses actually used, and what effect do they have on adjusted admitted waiting times?

In the following chart, each point represents one specialty at one Trust, and it shows all Trust-specialties where at least 50 patients were admitted during June 2012. The position along the x-axis shows the 90th centile adjusted admitted RTT waiting time; i.e. the waiting time exceeded by only 10 per cent of patients, measured from referral to admission with clock pauses deducted. The position up the y-axis shows how much time was deducted for clock pauses, compared with the 90th centile unadjusted admitted RTT waiting time.

Do you think that an alien, looking at this chart, might be able to guess what the adjusted admitted target is? 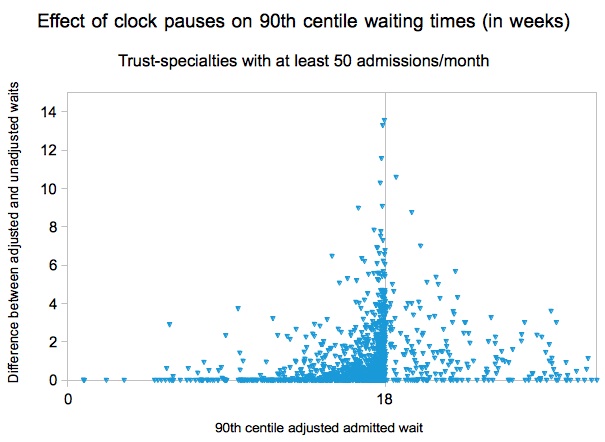 You have to admire the accuracy with which so many services are achieving 18 weeks, with exactly the right amount of clock pausing.

It is also striking how much more common clock pauses are, in those services that are only just achieving the 18 week target. For services that lie between 17 and 18 weeks, some 42 per cent include at least one week of clock pauses; for the rest, the figure is just 24 per cent. Looking at it another way, the 17-18 weekers include an average 1.5 weeks of clock pauses, and the rest just 0.7 weeks.

The gap between the line and the columns shows the net number of clock pauses: i.e. the number being paused minus the number coming off pause. There are no net pauses at all below 15 weeks, then 39 net pauses between 15 and 18 weeks, and then above 18 weeks they all start coming off pause again.

If this service had paused only 37 patients instead of 39, it would have failed the target. By a remarkable coincidence, it has achieved the target by a similarly narrow margin every single month for the last three years; the extent of clock pausing varies, but the adjusted result remains the same.

I am not making a blanket accusation that any service, that narrowly achieves the adjusted admitted target with just the right level of clock pauses, is misusing clock pauses in order to achieve the target. But I think it is fairly clear that some of them probably are, and some systematically.

Does it matter? Yes, but not as much as it used to, because the recently-introduced incomplete pathways target does not allow clock pauses to be deducted. If that target ever achieves the primacy it deserves over the adjusted admitted target, then pauses will become largely irrelevant. Normal levels of patient-initiated pauses (which, as we saw in the first chart, do not have a big impact on waiting times) will be absorbed within 18 weeks and the 8 per cent tolerance on incomplete pathways.

Even as the targets stand today, any service with a very high level of clock pauses will still breach the incomplete pathways target (as the example above does). Unless, of course, a service decides to adjust the incomplete pathways for pauses too. That isn’t allowed, but it does happen; how else could you explain the chart below, in which long-waiting patients are apparently being admitted even though there are no long-waiting patients on the list (and weren’t the month before, either)?

(The Department of Health has just published the checks they run across all the monthly RTT data submitted by Trusts, including checks on clock pauses. You can download the document “RTT Assurance Data Checks (PDF, 54K)” here.)