Scotland met its referral-to-treatment (RTT) target again at the end of June: a perfect record of achievement since the target came into force in December 2011. Sounds great. But is it?

A target has been met, but that doesn’t mean waiting times have improved.

If you look at the long-waiting backlog still on the waiting list, you can see (even if you omit scandal-hit Lothian) that it is growing instead of shrinking: the outpatient backlog is lurching upwards in seasonal jumps while the inpatient/daycase backlog rises more steadily. (Scotland does not collect RTT data for incomplete patient journeys, which is why we have to look at stage-of-wait data to estimate what is happening to the backlog.) 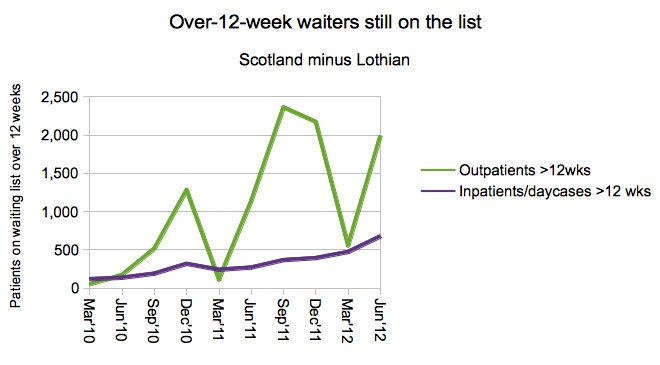 Meanwhile, the RTT figures for completed patient journeys show (as we noted before) that the number of long-waiters being treated is continuing to decline, despite the rising backlog. That is the manner in which the target (that 90 per cent of patients must have waited less than 18 weeks RTT when they are brought in for treatment), is being met. 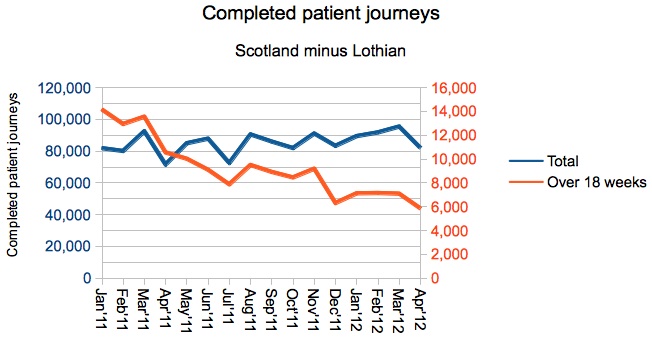 The number of long-waiters being treated is falling, but is still high enough overall to allow Health Boards to treat these long-waiters on their waiting lists. Even Ayrshire & Arran, the only Health Board with sharply rising inpatient/daycase long-waits and falling RTT longwaits being treated, is still able to tackle its overall longwait backlog within the RTT target (dark blue lines in the chart below; the inpatient/daycase backlog uses the right-hand scale). 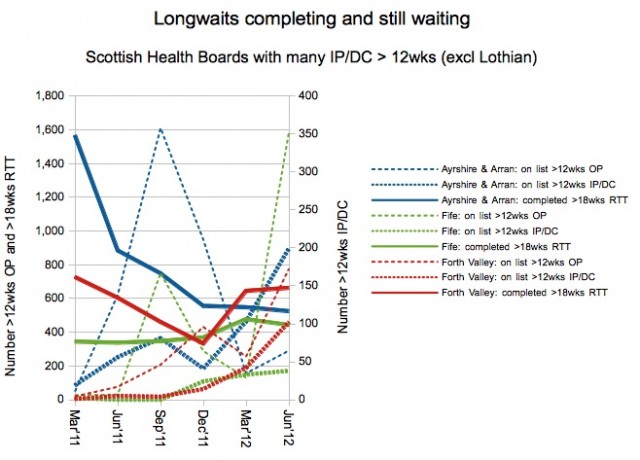 Three health boards with many longwaits

Forth Valley (red lines in the chart) failed the RTT target while clearing long-waiters from the backlog, and were criticised in the media for it. It would be fair enough to criticise them for having long-waiters in the first place, but it surely makes little sense to complain when they treat them. (This has been a pitfall of treatment-based targets in England too.)

Among all this detail, an interesting story is unfolding; a story quite different from the development of waiting times policy in England:

The Scottish RTT target came into force in December 2011, and this has been the top priority for hospitals when it comes to waiting times. Backlogs have been allowed to grow in some places, not necessarily as a ruse to achieve the RTT target, but perhaps more because eyes were taken off that particular ball.

But priorities are changing in October, when the legally-binding Treatment Time Guarantee (TTG) comes into force. This requires inpatients and daycases to start treatment within 12 weeks of agreeing to it. This target is more stringent than the 18-week RTT target, and those Health Boards that have built up backlogs will need to clear them, even if that means failing the RTT target while they do so.

If Health Boards are successful in clearing their backlogs, then things could settle down nicely. However Scotland’s target regime has quite a few holes in it which financially-squeezed Health Boards might feel they are being pushed into:

1) Backlogs can still build up in outpatients, either in follow-up loops or on the outpatient waiting list itself. Those patients fall outside the TTG because that only covers the inpatient and daycase stage of wait. They also escape being counted under the RTT target until the day they are eventually brought in for treatment. So a delay at outpatients is a way of postponing the expense of admission and, once a backlog has built up, the RTT target actively discourages Health Boards from clearing it.

2) In common with Scottish waiting times targets down the years, there are still far too many opportunities to pause the clock on patients, both in the TTG and RTT targets. These opportunities are taken up very widely: 25 per cent of inpatients/daycases on the Scottish waiting list are declared “unavailable” (and some 43 per cent in NHS Grampian).

3) There is also a temporary issue that patients added to the inpatient/daycase list before October are not covered by the TTG. Will Health Boards seek a little short-term relief by neglecting those patients on the waiting list? From a patient care standpoint, that would be most unfair. From the Health Board’s point of view, the extra complexity of managing and planning against two parallel target regimes is not to be sneezed at. And they can’t neglect those patients forever, so I hope Health Boards do the right thing and treat patients equitably (even if strictly the TTG does not apply to them all).

The best longer-term solution for waiting times policy would be to set an incomplete journeys target (with no adjustment for clock pauses), like the target being introduced gradually in England. However Scotland’s data systems are probably not quite ready for that challenge yet (even England, which is some years ahead of Scotland on RTT measures, is still far from perfect when it comes to stitching incomplete pathway waits together).

The caveats aside, Scotland’s new target regime is an interesting case study because the waiting-list-based target (the TTG) is more stringent than the as-they-are-treated RTT target which runs alongside it. This is a step ahead of England, where the as-they-are-treated targets are still more stringent. The TTG prevents Health Boards from building up backlogs for expensive admitted procedures, and the economics of the RTT target (which lumps admitted and non-admitted patients together) encourage them to treat inexpensive patients quickly in clinic instead of building up a backlog.

It’s messy, yes, but Scotland’s target regime does have its pragmatic points. Will it work out nicely, or will the loopholes undermine it? We’ll just have to wait and see. (Personally, I fear the loopholes.)

(All data from ISD)