The blip is over: waiting times break new records

Yes, it was just a blip. Waiting times returned to record-breaking form in August, with best-ever performances for the number of long-waiters on the waiting list. Here’s a quick run-down of the new records set: proportion of waiting list over 18 weeks; numbers of over-26, over-39 and over-52 week waiters on the list; and 95th centile waiting time for incomplete pathways.

It was also nice to see the new Secretary of State taking a personal interest in one-year-waiters, retweeting that they hit a new record low of 2,052 (compared with 19,938 the year before). It’s only his 5th tweet since taking office, so let’s take this as a hopeful sign that he’s focused on wiping the stain of one-year-waits from the English NHS.

The following analysis is for referral-to-treatment (RTT) waiting times in England in August 2012. The source data is available from the Department of Health, and our summary of the data is downloadable as the Gooroo NHS waiting times fact checker. Usual caveat: restrictions on patient referrals mean that these figures don’t tell the whole story.

The total number of patients on the waiting list continues to follow the seasonal trend with uncanny precision. 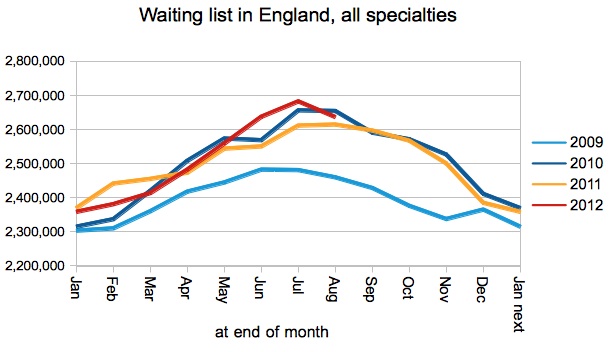 So does the number of patients admitted as inpatients and daycases. I got fed up with all the zigzagging caused by the mundane fact that different months having different numbers of working days, so from now on this chart shows admissions per working day. Much better. We can see the influence of school holidays and cold winters properly now. 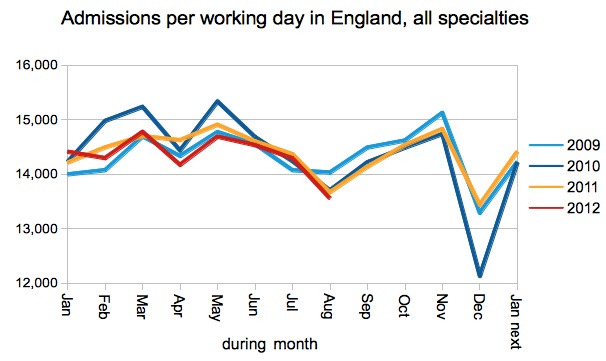 The number of very-long-waiters continues its very-welcome decline. But why are there still 2,052 one-year waiters on the waiting list? This is everything to do with scheduling practices and data hygiene, and nothing to do with resources. 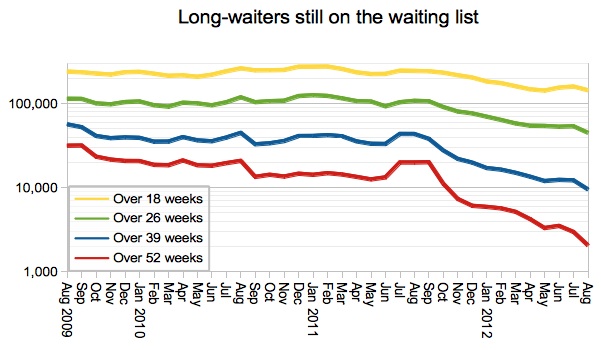 The 92nd centile waiting time for incomplete pathways ended August at 16.3 weeks, and has stayed nicely below 18 weeks all year. 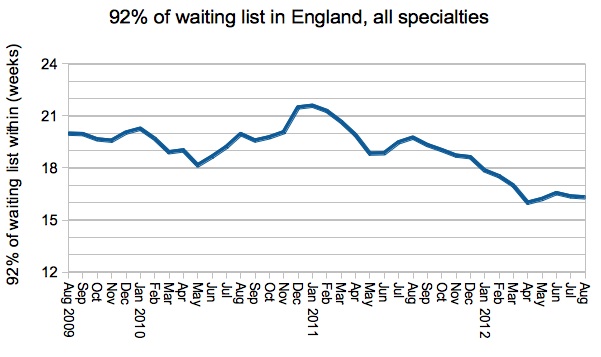 At specialty level, it’s great to see neurosurgery waits falling so fast, almost rejoining the rest of the pack. Of the big surgical specialties, orthopaedics remains the longest-waiting and nationally has yet to achieve the new target that 92 per cent of the list must be within 18 weeks. General Surgery has resumed its improvement in waiting times, and has avoided being worse than orthopaedics (at least for now). 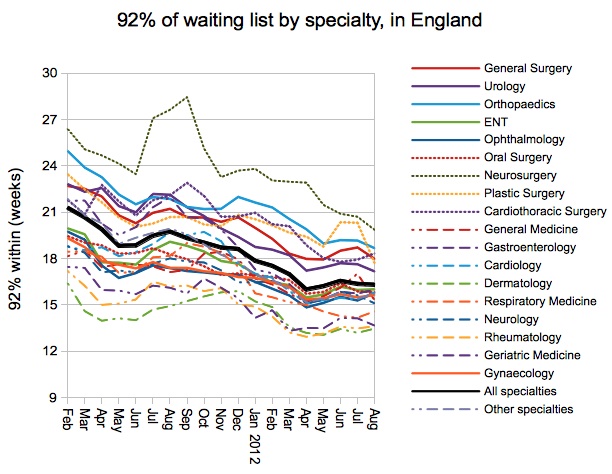 This used to be a Trust top ten, but for the first time I am including independent sector providers in the list (many thanks to Rob Rainford at NHS Ashton, Leigh & Wigan for pressing me about this).

It’s quite an eye-opener to find the top slot taken by an independent sector provider. Clinicenta Ltd has 27 per cent (805 patients) of its waiting list over 18 weeks, and 12 patients waiting over a year, with the worst waits being in Ophthalmology.

The biggest improver was Mid Staffs, who fell from having the 8th longest waits to 144th (and their 92nd centile waiting times fell from 18.8wks to 14.5wks). Well done that Trust.

North Bristol did not submit data. Their waiting list has been going up on a ramp since Christmas, and last month they were just below the Robert Jones on the ‘top ten’ and had 298 patients over a year.

The next blog post will have all the local specialty-level detail by provider and PCT.

cialis generic india
Return to Post Index
We have placed cookies on your device to help make this website better. If you continue to use this site we’ll assume you are happy with that.OkRead more