This fantastic achievement by the NHS should be shouted from the rooftops! (Actually, despite limp Ministerial briefing by the Department of Health, it is. The BBC know where to get their news from…)

Yes, a lot of the 20,000 were data errors, treated on computer terminals not operating tables. But with the data errors largely out of the way, hospitals have a much clearer view of the genuine very-long-waiters, and can give them the treatments they have been waiting for. So clearing data errors is good news too; not quite as exciting as actually treating people, but a worthy activity in its own right. Managers and clerks, as well as clinicians, were key to this success.

The Government and the Department of Health deserve credit too. A year ago this week, Andrew Lansley announced on Radio 5 Live the new incomplete pathways target, and the number of very long waiting patients has declined steeply every since. All credit to them for realising the importance of cutting long-waits on the waiting list, not the number being treated.

So whatever your role, give yourself a big pat on the back for cutting one-year-waiters.

And when you’ve finished doing that, consider this. In September 2012 the NHS in England admitted 292,087 patients. How come we didn’t find room for the 1,613? This is not about resources, it is about priorities, so why don’t we have one final heave and finish the job? We only have to rearrange one half of one per cent of our monthly capacity, and we’ve done it.

So on to the detail. As always, this is all based on referral to treatment waiting times data for the NHS in England, as published by the Department of Health. You can download a summary table of all the statistical trends here: Gooroo NHS waiting times fact checker. Usual caveats: restrictions on patient referrals mean that these figures don’t tell the whole story, and data errors may affect accuracy (especially for incomplete pathways).

The total number of patients waiting is slightly higher than usual for September, but (so far?) nothing to worry about. 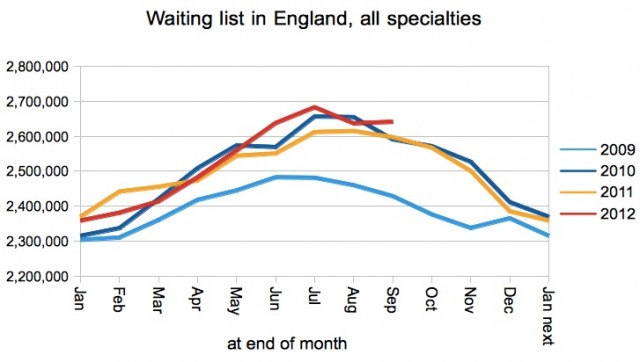 Admissions are very much in line with recent years. 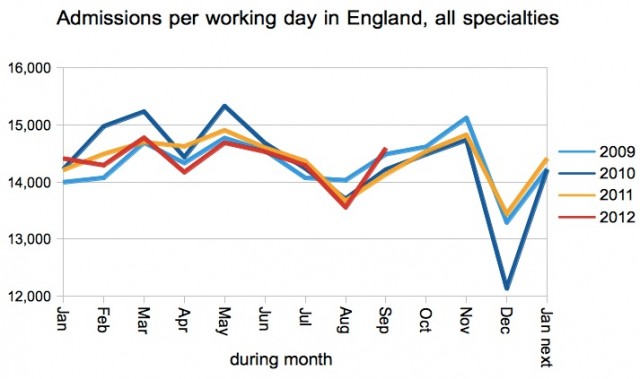 The number of very-long-waiting patients continues to fall rapidly. Hooray! Just 1,613 over-one-year-waiters to go. (I wonder how long ago the very-longest waiting patient was referred? Shouldn’t we know?) 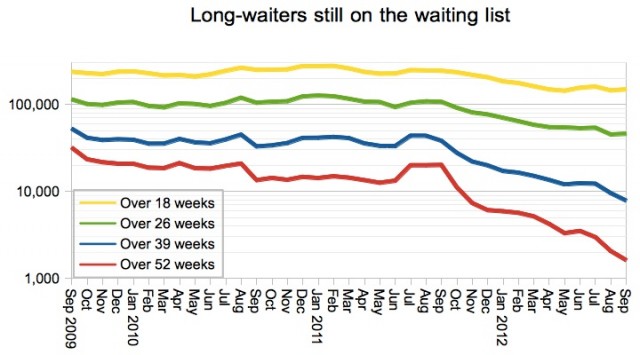 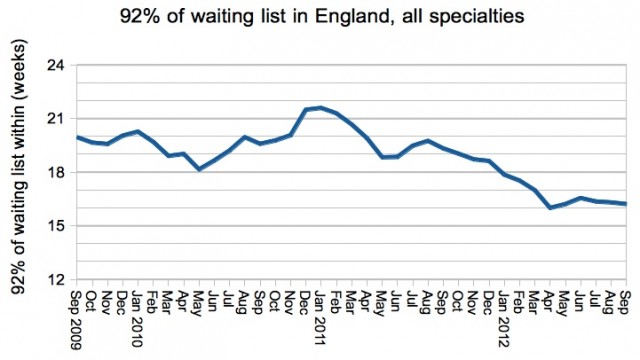 At specialty level, the longest-waiting specialties are improving the most. 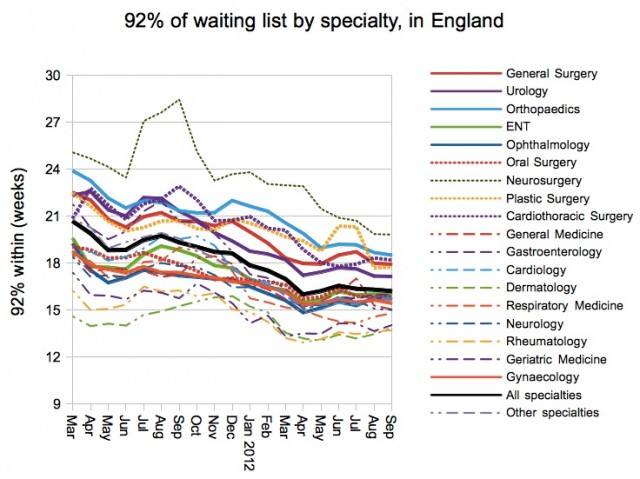 At provider and specialty level, the proportion of services achieving the target (that 92 per cent of incomplete pathways should be within 18 weeks) is also treading water. Remember, this target has been set for every specialty in every month. 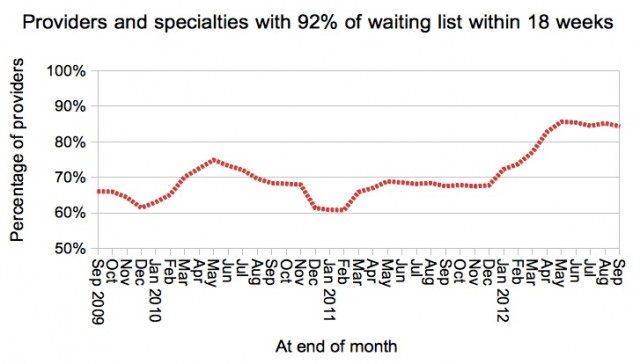 Three hospitals have much longer waits than the rest of our top ten longest-waiting providers, and astonishingly two of them are independent sector. Isn’t the whole point of IS providers to reduce waiting times? Clinicenta even have patients waiting over a year. RJAH have grabbed the top slot again, though it doesn’t stop them getting the highest patient satisfaction ratings in the NHS.

North Bristol did not submit data for incomplete pathways (again). When they last reported, in July, they had 298 over-one-year waiters and a rapidly-growing list.