Record numbers of Scots are waiting over 12 weeks for their outpatient appointments, though you wouldn’t know it from the main waiting times targets.

The top waiting times priority in Scotland is the 12-week Treatment Time Guarantee (TTG). Health Boards are required in law to ensure that patients access treatment within 12 weeks of agreeing to it (i.e. usually within 12 weeks of their outpatient appointment). The TTG is not quite being achieved 100%, but over 98% isn’t bad and it isn’t getting any worse.

The second priority is referral-to-treatment (RTT) waiting times. The target, that 90 per cent of treated patients should have waited less than 18 weeks since referral, is being achieved. There is no RTT target (in Scotland) to cover those who have not been treated yet and are still waiting.

Next in line we have Health Boards’ responsibility to see new outpatients within 12 weeks. This has the lowest status and is where the long-waits are building up.

Finally we have a whole load of patients who do not benefit from any of these promises, because of the many detailed rules that make waiting in Scotland so complicated.

The odd thing about the main TTG and RTT targets is that it is perfectly possible to achieve both of them, even if waiting times are going through the roof. How?

Let’s take a very simple example in which 100 patients are referred to you. For the sake of drama, let’s assume that you only have the capacity to treat half of them. How can you achieve the TTG and RTT targets?

What about the other 50 patients, who are still waiting for their outpatient appointment? If you leave them waiting indefinitely then they will never blemish your record on either the TTG or RTT targets. Even if you see some of them in outpatients after they have waited for ages, you can still perform well; if you see them promptly as inpatients then the TTG is achieved, and so long as they make up less than 10 per cent of your treatments then you are fine on the RTT target too.

So the TTG and RTT targets do not prevent backlogs from building up in outpatients, and the RTT target actually deters Health Boards from treating patients once they have waited over 18 weeks. So, if Health Boards are struggling to keep up with demand, you might expect to see rising outpatient waits while everything else remains rosy.

All in all, it looks like a classic example of hitting the target but missing the point. 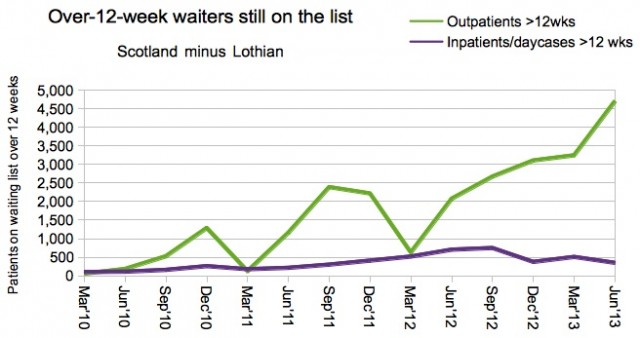