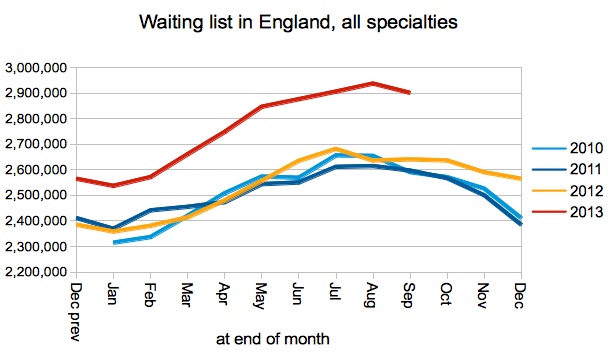 The English waiting list began its seasonal shrinkage right on cue in September, easing fears that it might continue to grow in the run-up to winter. It remained large compared with recent years, but whether this will result in widespread breaches of the 18 weeks RTT targets remains to be seen.

Performance on 18-week and one-year waits remained steady, and even orthopaedics just achieved the main “92 per cent” 18 weeks target. All the commissioning regions cleared this target too, though the bar wobbled when London came in at 92.3 per cent.

After growing unexpectedly in August, the waiting list shrank as usual in September towards its winter minimum. Nevertheless it remained large compared with previous years.

Admissions were in line with last year, which was slightly up on the years before.

The position on 18 weeks remained steady.

The proportion of specialties within providers, who achieved the “92% of the waiting list within 18 weeks” target, remained steady.

Only 41 NHS Trusts and 7 independent sector providers had any one-year waiters at all (down from 44 and 8 in August).

Ranked by how long 92 per cent of the waiting list was waiting at the end of September, the provider top ten is:

As noted above, The Whittington did not report in September. They have had serious difficulties with their 18 week waits (and topped the table in August), but a failure to report usually signifies a technical or serious recording issue. I hope they sort it out soon.