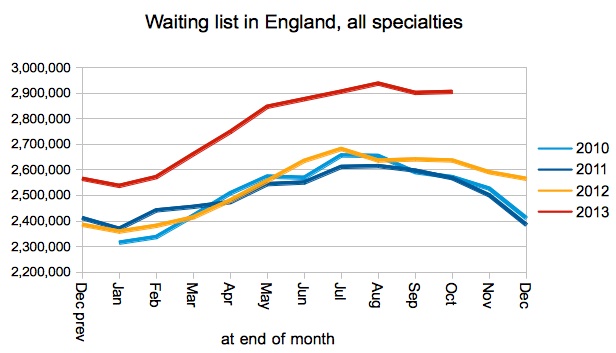 The English waiting list is biggest in the summer, and shortest in the winter. In October it always shrinks… until now. For the first time since records began six years ago, the waiting list grew in October. Not by much, but it still grew.

Other than that, October’s data told the same story as recent months. The waiting list is worryingly big. But 18-week waits are still fine. Will there be national-level breaches over winter? Who knows?

The position on one-year-waits has probably deteriorated, though it is hard to tell because two notable Trusts failed to report any data. The official figures show 256 one-year-waiters on the waiting list at the end of October, which is the lowest ever reported. But that figure excludes Barnet and Chase Farm (who last reported 182 in September), and The Whittington (who last reported 22 in August). That all adds up to 460, which would be the highest number of one-year-waiters since all the dramatic reductions which ground to a halt back in March. We don’t know the actual figures, so this is speculation, but it would be a great shame if one-year-waits were sliding backwards again.

The waiting list grew slightly in October; the first October rise since records began in 2007. The waiting list is big, and the gap has just widened a little more against recent years.

Inpatient and daycase admissions from the RTT waiting list are in line with recent years. Clearly this is not enough; the NHS is not keeping up with demand and needs to put that right if waiting times are to remain under control.

The headline figures for ultra-long waits show an apparent improvement, but this is illusory because two Trusts with one-year waiters did not report their data (notably Barnet and Chase Farm who reported some 182 one-year-waiters in September).

Despite the large waiting list, performance on the most important measure of 18 week waits remained steady.

Even Orthopaedics managed to stay within target. However Neurosurgery, Plastic Surgery and Cardiothoracic Surgery all missed again.

The proportion of specialties at provider level, that were achieving the main 18 week target, remained steady too.

Ranked by how long 92 per cent of the waiting list was waiting at the end of October, and excluding Barnet and Chase Farm and The Whittington, the provider top ten is: