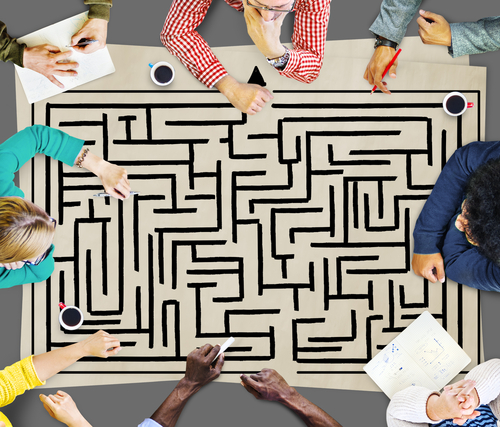 When you start using Gooroo Planner you will probably model your surgical pathways something like this: 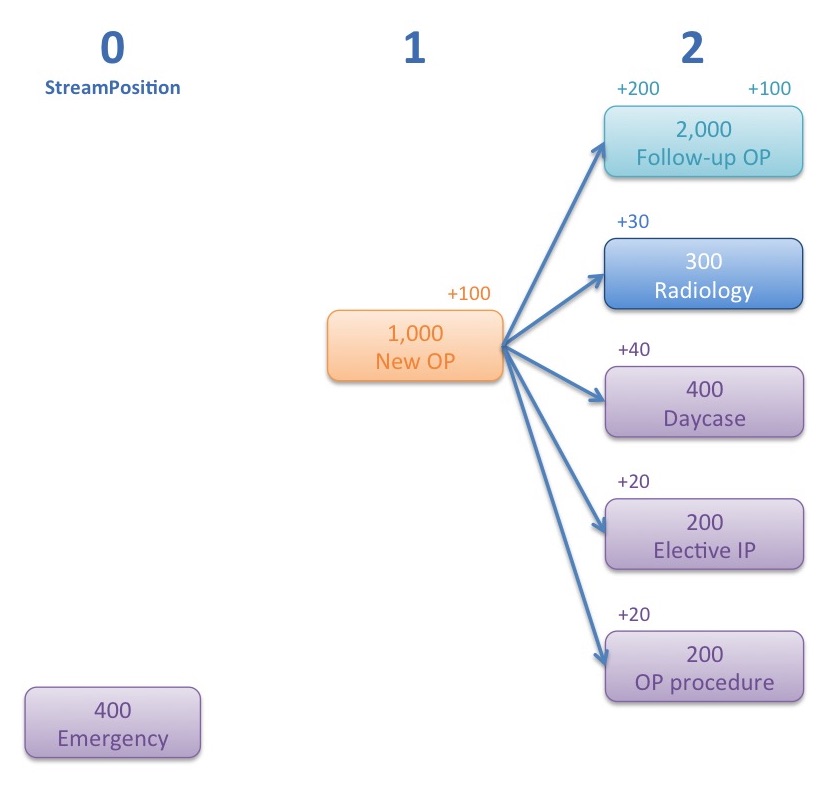 In this diagram the pathway begins with 1,000 new outpatients (shown in orange), and this activity has several direct consequences. Some of those new outpatients go on to have several follow-up outpatient appointments (demand for 2,000 appointments, in turquoise); in Scotland these are known as repeat or return appointments. Some have radiology diagnostics (demand of 300 patients, in blue). Some also go on to have surgery in various settings (purple). Separately, we have 400 emergency patients who stand alone because they don’t affect the pathway that begins in outpatients.

Gooroo Planner automatically works out the conversion rates from the new outpatient activity to demand in the other settings of care. So from new to follow-up outpatients it’s 200 per cent (i.e. each new outpatient receives an average of two follow-up appointments ), to radiology it’s 30 per cent, and so on.

Now let’s say that we are planning to see an extra 100 new outpatients, shown by the little number to the top right of the orange box. That’s a 10 per cent increase in new outpatient activity, and if conversion rates are steady then we would expect that to cause demand to increase by 10 per cent in all the other settings of care that are downstream. So we get extra demand for 200 follow-up appointments, 30 radiology appointments, etc as shown by the little numbers to the top left of each box.

If you model this in Gooroo Planner, and set the scenario to keep the waiting lists a constant size, your activity and demand comes out like this – it’s the same numbers as in the diagram above.

All very straightforward, and a good start to our modelling.

But now let’s say we have a backlog in follow-up outpatients that we want to clear, and we need to see an extra 100 follow-up patients to do it. That’s shown by the number to the top right of the follow-ups box above. We know that, in real life, some of those extra follow-ups would go on to have surgery, causing yet more demand there. But our current model doesn’t factor that in. What can we do? 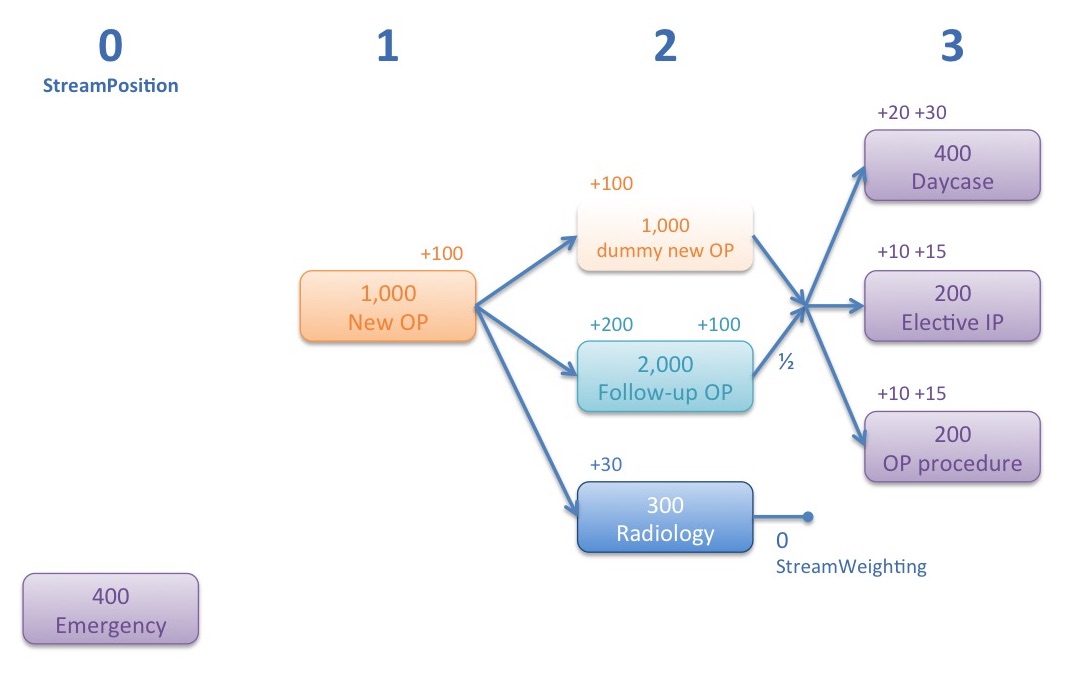 The diagram above shows how we can model the knock-on effects of extra follow-up outpatient activity. The trick to making this work is to have a dummy new outpatient service at stage 2 of the pathway, because then we can make all the patient flows work as intended.

The next stage of the pathway needs some careful control. The extra radiology patients do not, in this model, cause extra demand for surgery; everything is taken into account through the outpatient services. So we set the conversion rate from radiology to zero to stop extra radiology activity from having any further effect. The other thing we know (in this example) is that follow-up outpatients are only half as likely as new outpatients to convert directly to surgery. Now we are ready to work out the effects on surgical demand (and don’t worry, Gooroo Planner does all this for you):

Again, don’t worry if you find this rather confusing – Gooroo Planner takes care of it all for you. But this explanation might be useful if somebody asks you how your similar modelling works. If you run this example through Gooroo Planner then the demand and activity numbers come out like this (click the picture if you want to enlarge it):

Now that we understand how to model quite a complex pathway, we can extend our modelling into even more advanced situations. 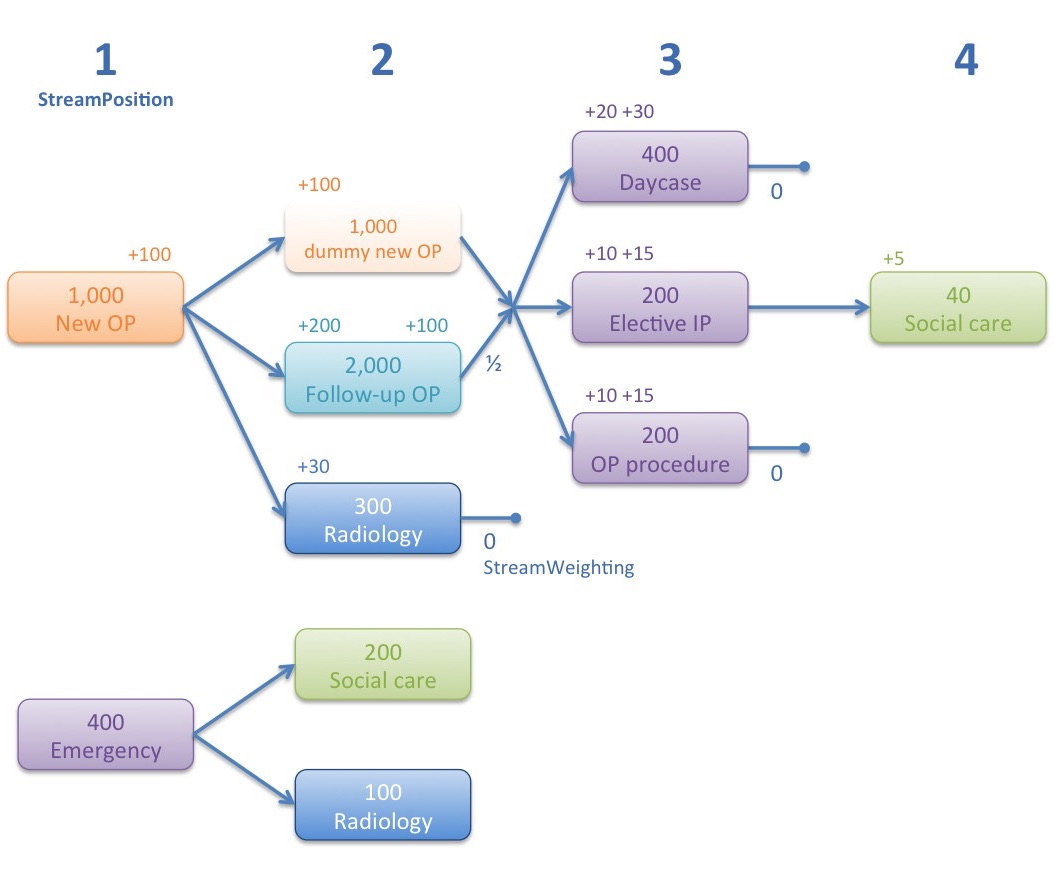 In this example we have added social care assessments downstream of each inpatient service, and a further radiology service downstream of emergencies. Once again you can track the effects of extra activity through the system.

Now that you understand in principle how to model complex pathways, why not try it for yourself in Gooroo Planner? You can start by downloading this zip package, which contains ready-to-upload statistical datasets for all three examples above, together with the calculation settings needed to reproduce the same numbers. It’s all surprisingly straightforward; the dataset for even the final and most complex example is as simple as this:

As always, if you need any help modelling your pathways then we are ready to help. Just email support@gooroo.co.uk. If you don’t yet have a licence to use Gooroo then please contact us at info@gooroo.co.uk to ask about setting one up.