England’s “18 weeks” performance took a sharp turn for the worse in March, according to the latest figures released by NHS England.

The underlying number of patients on the waiting list jumped by about 63,000 during the month, reaching levels not seen since January 2008. Performance against the “92 per cent within 18 weeks” target was the worst since it was introduced back in in 2012, at only 91.5 per cent (even without adjusting for non-reporting Trusts).

The number of admissions per working day was well down on previous years, as it was in February. Clearly the NHS is still not keeping up with demand, so the waiting list is growing, and a longer queue means longer waits.

This performance is much worse than expected. Last year I forecast that England would narrowly start achieving 18 weeks again at the end of March, and achieve it decisively at the end of April. But the waiting list has now grown so fast that even an April breach is now possible.

The 18-week target (dark line below) surged back into breach territory at the end of March, as the waiting list grew sharply and the number of long-waiters being treated stalled. 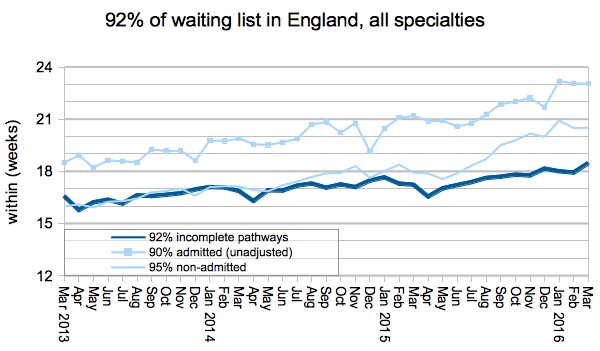 King’s College Hospital and Homerton NHS Foundation Trusts both resumed reporting in March, with much larger waiting lists than they previously reported, and this has made a significant difference to the figures. Nevertheless the waiting list probably grew by about 63,000 during the month of March after adjusting for the other non-reporting Trusts. 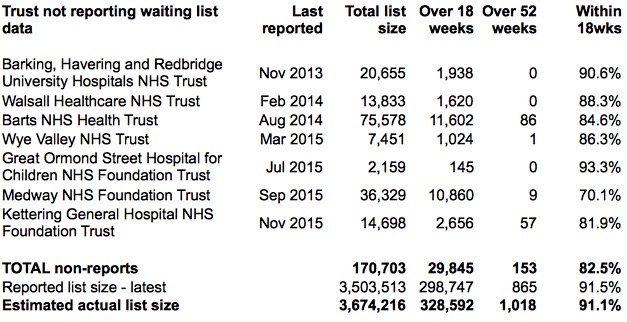 All the figures from here onwards are the official ones, without any adjustment for non-reporting Trusts. 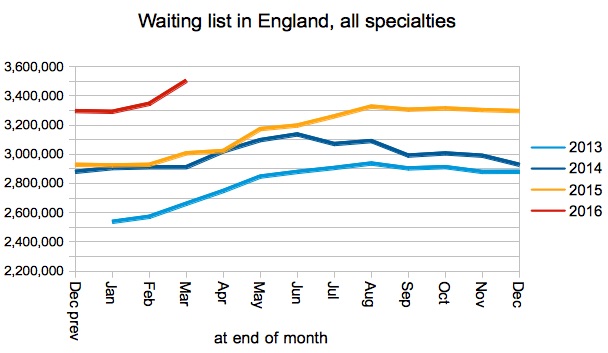 Admissions per working day were much lower in February and March than in recent years, and this contributes to the rising waiting list as the NHS fails to keep up with demand. 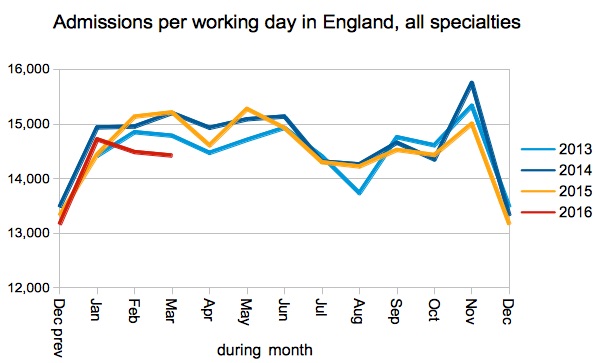 The true picture on very long waits is hundreds of patients worse than the chart below suggests, because of non-reporting Trusts, so it would not be sensible to place much reliance on it. 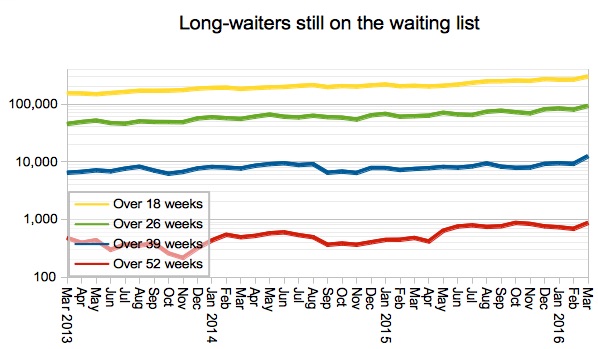 Looking at the England-wide picture at specialty level, long waits increased across the board. The dramatic increase in Neurosurgery waits, for which I had to change the scale on the chart below, is largely an artefact of King’s College Hospital NHS Foundation Trust resuming reporting. Only 53.5 per cent of their Neurosurgery waiting list is within 18 weeks, which is the lowest in England. 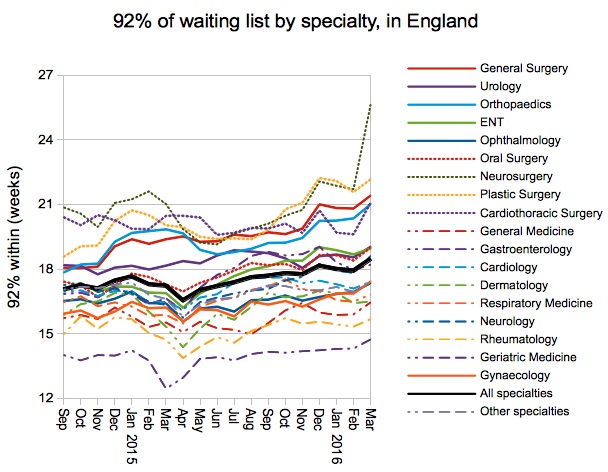 Drilling down to individual specialties within local Trusts, only 73.3 per cent of local specialties were achieving the 18 week target at the end of March. 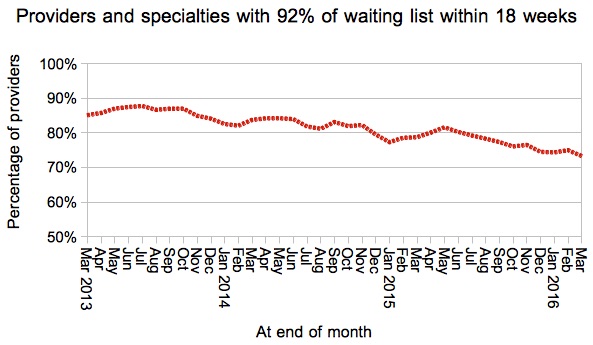 73.3 per cent is where the line in the next chart crosses the 18 week mark, and this chart shows the distribution of those local waiting times. During March, longer waits got longer and short waits got shorter. However waiting times are worse year-on-year across the whole spectrum and particularly at the shorter-waiting end – more and more specialties are closing in on 18 weeks. 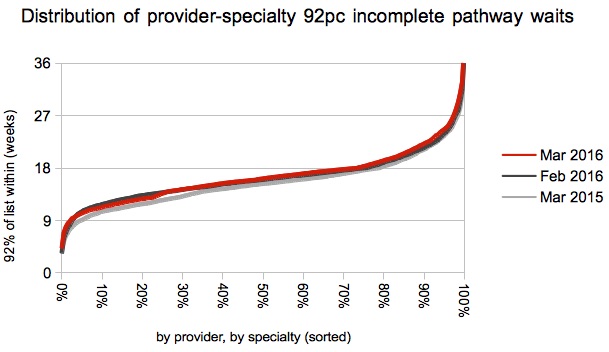 Brighton and Sussex University Hospitals NHS Trust continued to lengthen their waiting times in March. King’s College Hospital NHS Foundation Trust have jumped in at second place; it is quite common for Trusts to show long waiting times when they resume reporting after a long absence.

Data for April 2016 is due out at 9:30am on 9th June 2016. There is a possibility that the English NHS might start achieving the 18 week target again (even with non-reporting Trusts factored in), but the rapid growth in the waiting list means that even this is now in jeopardy.