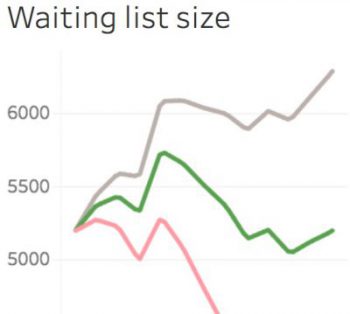 Need a forecast of your referral-to-treatment (RTT) profiles for 2018-19? Look no further. The following analysis is available by Trust, by specialty, right across England. The complete set of profiles is published on Tableau Public here.

I’ll start by looking at the analysis itself, and then explain some of the quirks that you’ll want to watch out for.

Profiles for a long-waiting service

Let’s take an example. The profiles below are for a particular ENT service that currently has long waiting times. The top two charts show that, if you kept up with demand (the green line), the waiting list and waiting times would finish up at the same level as they started, as you would expect. This is the scenario that NHS England/Improvement are particularly keen you should deliver. 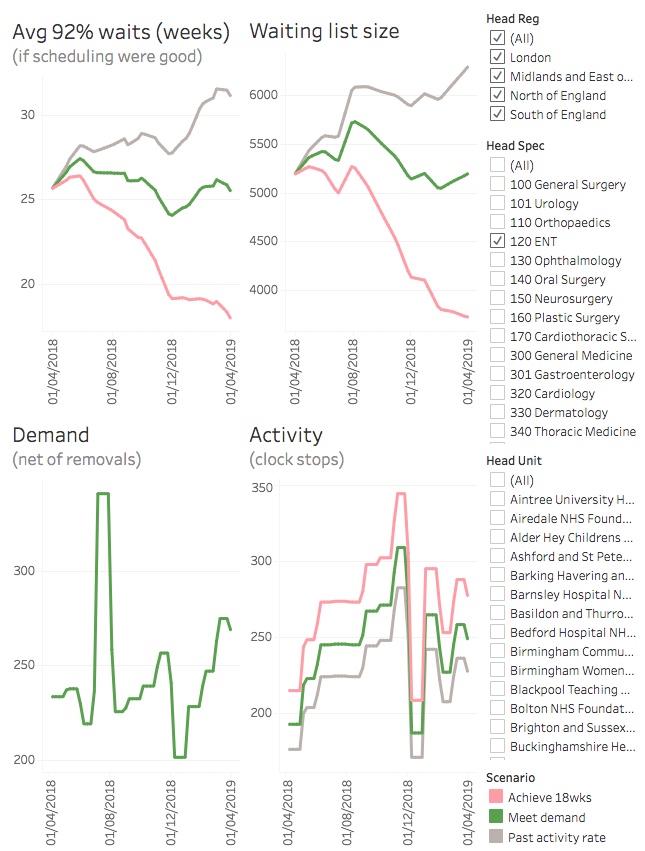 So what about the bottom two charts? They show why the waiting list and waiting times are rising or falling.

The bottom left hand chart indicates demand (clock starts), and demand is the same under all three activity scenarios. The numbers are based on the real seasonal profile of clock starts seen over the last two years; in this particular service there tended to be a surge in clock starts in July, and a slump in December.

Again the seasonal profile is based on what happened in the last two years, and this trust has evidently been going for pre- and post-Christmas surges to cope with the holiday shutdown. (And if you are wondering why the demand and activity charts look blocky, it is because the published RTT data is only available monthly.)

The starting waiting times in these profiles broadly tie in with the RTT reports that we publish every month, and the chart below shows the snapshot for this particular service at the end of March 2018. The green triangle below shows the best RTT waiting time that could be expected if there were good patient scheduling; at 25-26 weeks, it matches the starting point in the top left hand chart above. A fuller explanation of these snapshots is available here.

Profiles for a shorter-waiting service

For the example above, I chose a service with quite severe waiting time pressures. However when you browse the data you will notice that many services don’t follow the same pattern.

For instance the charts below show a service that currently has short waiting times, is already broadly keeping up with demand, and where good patient scheduling would allow the waiting list to grow and still sustain 18 weeks. 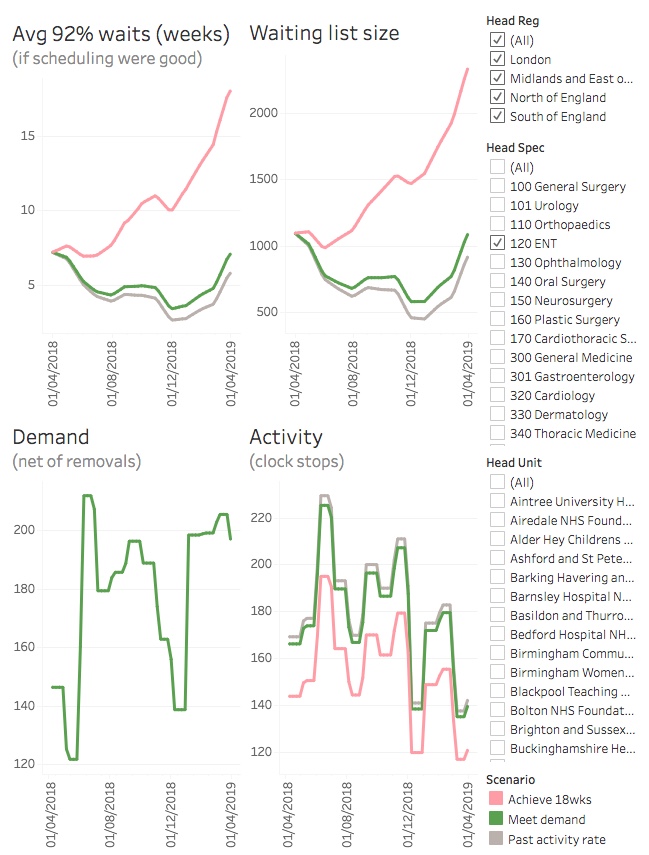 This conclusion is consistent with the green triangle in the snapshot below. As is usually the case, this trust’s real-life waiting times are somewhat longer than that (as shown by the red triangle). So you may find it helpful to think of both the green triangle in the snapshot below, and the “if scheduling were good” lines in the profile charts above, as representing the best waiting times that could be achieved at the safe limits of good patient scheduling.

Things to watch out for

This is RTT data

The published waiting list data in England is on an RTT basis, so that is the basis we have had to use in this analysis. Serious demand and capacity planning would usually be conducted for each stage of treatment separately (new outpatients, elective inpatients, etc), but we would have needed access to each trust’s local data to populate the model on that basis.

If you would like to compare this analysis with your own stage-of-treatment plans, be aware that it can be fiddly to reconcile stage-of-treatment data with RTT data because of inconsistencies around non-consultant-led activity, diagnostics and follow-ups.

We have excluded any local specialties that either have small waiting lists or small volumes of activity, or where any data is missing over the past year. That adds up to quite a lot of excluded data, which is why the total waiting list for these charts is smaller than the published waiting list for England.

Your own planning profiles will have used local assumptions about how fast demand is growing. For consistency we have applied zero annual growth in demand across all services, which is broadly in line with the national planning assumptions.

It is based on recent seasonality

The seasonal profiles for these forecasts are based on the average of the last two years of actual clock start and clock stop data for each service. Your local demand and capacity plans may have used different seasonal assumptions; for instance you may have assumed a different amount of elective slowdown in the final quarter.

You can aggregate, but waiting times will be averaged

The filters in the Tableau Public charts allow you to select multiple services at the same time – indeed when you first visit the page everything is selected. This works well for the waiting list size, demand, and activity because they are counts of patients and they add up nicely.

However it doesn’t work so well for waiting times, because waiting times don’t add. So I have set Tableau Public to show the average of the selected waiting times instead, which can sometimes look surprising because those averages don’t necessarily come out in the same order as the total waiting list sizes.

I’ll illustrate with a worked example. The figure below shows four specialties in the same trust, and although each individual specialty behaves as expected, the aggregate does not.

The moral is: when you are aggregating several different trust-specialties, take the average waiting time with a pinch of salt. 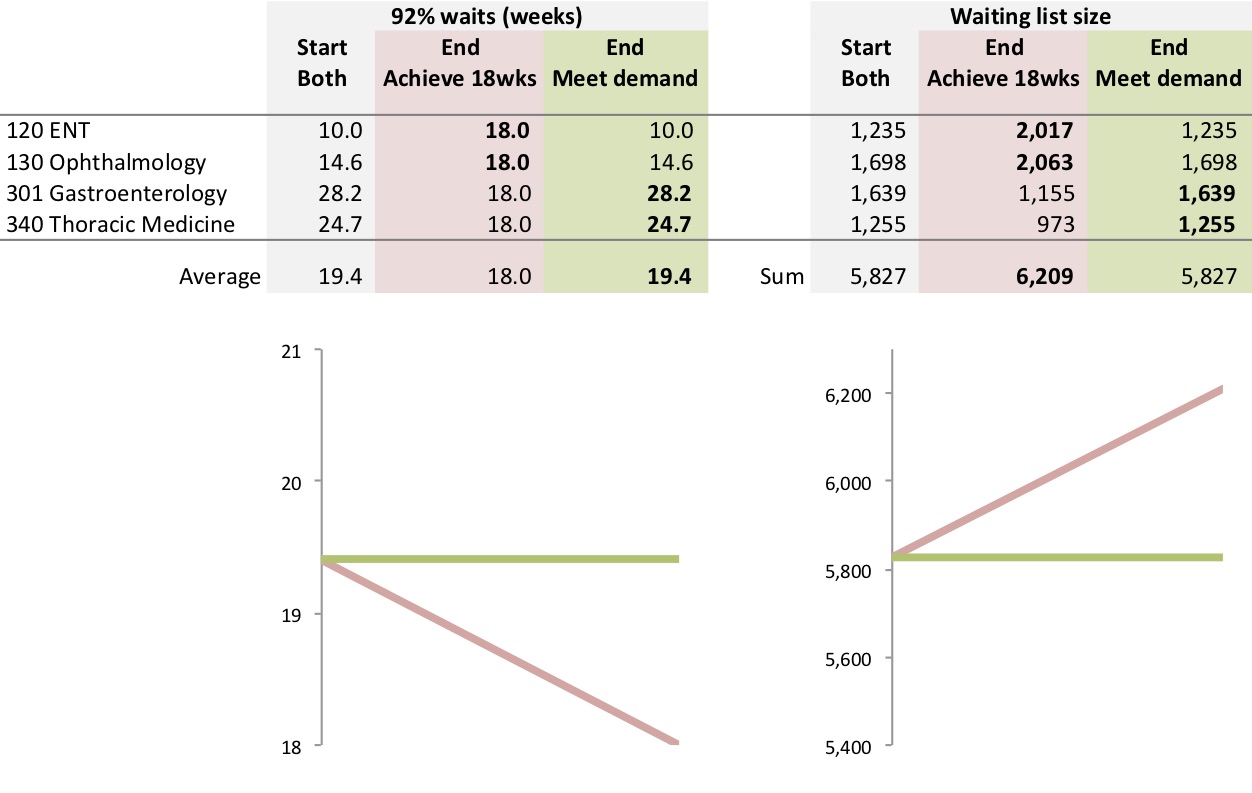 All profiles are based on the published RTT data and the forecasts were generated using Gooroo Planner. The raw data going into and coming out of the modelling is downloadable from Dropbox here and could be used to replicate this analysis.