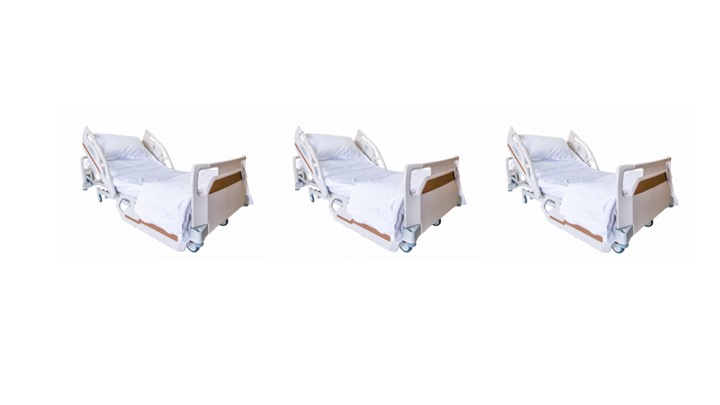 In the previous article we calculated bed occupancy, based on the acceptable risk of running out of beds, and the way that non-elective demand varies from week to week in any particular bed pool.

But that isn’t the whole picture, because non-elective bed usage also varies by the time of day, and day of the week, which we will refer to as ‘intra-week variation’. We need to take account of that too.

The chart below shows the intra-week variation in occupied non-elective beds (i.e. admissions minus discharges) in a particular adult general and acute bed pool.

The heavy black line in the middle shows what happens on average, and it is a strong and predictable cycle.

Every day, the beds fill up and then empty out. This is because admissions are fairly steady throughout the day (except in the small hours of the morning), but most discharges happen in the late afternoon with a peak around 6pm. So beds are fullest with non-elective patients in the middle of the day.

We can also see that beds tend to empty out during the working week and fill up at the weekend. This is because, although the rate of admissions is lower at weekends, the rate of discharges is even lower, so the net effect is for beds to fill up with non-elective patients on Saturdays and Sundays. The emptying out during the working week is the converse of this effect. 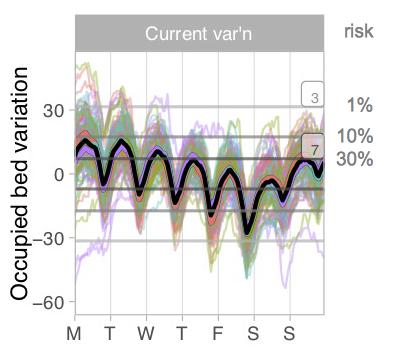 The heavy black line shows the average pattern, but what about the variation?

Each individual week (over a two year period) is shown by a different coloured line in the chart, and each of those lines has been zero-based because we have already taken week-by-week variation into account in the previous article.

Each week’s line has been coloured according to the calendar quarter in which it began. There are also heavy lines showing the average for that quarter; the fact that they are hard to see shows that intra-week variation does not vary much from season to season.

So we have a strong, regular cycle, as well as random variation – in other words, we have both predictable and unpredictable variation. Which of them should we take into account when calculating bed occupancy?

The level of risk

Again, it depends on whether we can manage the predictable variation. On the assumption that we are not literally going to open and close beds hour by hour and day by day, we need to maintain a low enough bed occupancy to absorb the predictable as well as the unpredictable variation. (And if you don’t like that assumption, it turns out to make surprisingly little difference anyway, as we will see in the next article.)

The risk lines have therefore been drawn straight across the chart, and we are now ready to look at the relationship between risk and bed occupancy for this intra-week variation. If we make enough extra beds available to satisfy the top grey line, then there will be a 1 per cent risk of running out of beds based on the intra-week variation. The next two grey lines show the extra beds associated with 10 per cent and 30 per cent risk.

Finally, we need to combine these intra-week risks with the week-by-week variations examined in the previous article (on the basis that the variations are not correlated, which they aren’t).

The end result is the overall relationship between the risk of running out of beds, and bed occupancy, for this particular pool of adult general and acute beds. It is summarised in the table below. 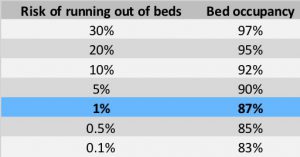 In today’s NHS, however, real bed occupancies are often much higher than either figure. The table shows that if bed occupancy were 95 per cent in this example then there would be insufficient non-elective beds about 20 per cent of the time, with the familiar consequences of frequently cancelled elective surgery, widespread outliers in other parts of the hospital, and increased clinical risks.

Such high risks are clearly unacceptable. But it may not be possible to open more beds. So in the next article we will look at what else we can do.