The English NHS has spectacularly reduced the number of patients waiting over a year for treatment: from over 20,000 in September 2011, to below 2,000 a year later. At the time, I commented that the reduction probably owed more to waiting list validation than to real patients being treated (but that didn’t stop it being a fantastic achievement).

Although I was pretty confident it was mostly validation (based on conversations with Trusts who were trying to clear their one-year backlogs) I confess I hadn’t actually analysed the published RTT data around this. So now I’m going to put that right, and look at the numbers properly.

It turns out that about 58 per cent of over-one-year waiters cleared since September 2011 cannot be accounted for in the figures for admitted and non-admitted patients. If most of the non-admitted patients were also validations, then up to 81 per cent of the reduction would be the result of data cleaning. So probably the true figure is somewhere in between, with around two-thirds or three-quarters being validation, and about one-quarter or one-third being real patients.

But dig a little deeper and a more interesting story emerges. Validation played the biggest role early on, and especially in the dramatic fall from 20,097 to 11,132 one-year-waiters that happened in October 2011. Since then validation has continued to play a large part, but more evenly balanced with real patient treatments.

Here’s a chart showing what happened: 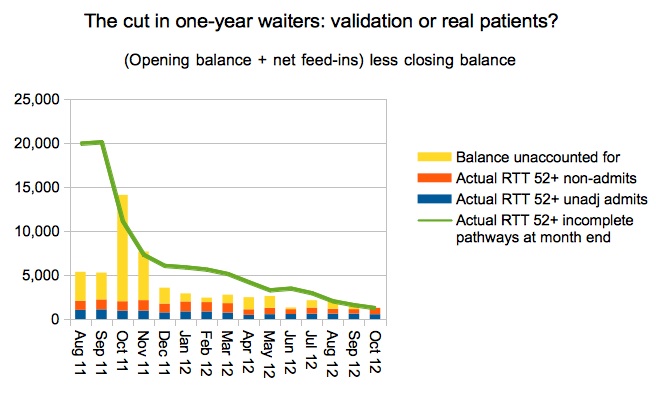 The green line shows the over-one-year waiting list (i.e. the number of 52-week-plus incomplete pathways) at the end of each month. The columns show how many over-one-year patients had to be cleared from the list during each month, and how much of this is accounted for by the non-admitted and the (unadjusted) admitted patients data.

Let’s dig a little deeper into that October 2011 validation exercise. The accounts work something like this:

of whom some were removed as admitted and non-admitted: ~407

Which gives us a potential closing balance of over-52-week waiters at the end of October of 25,216

So the total number removed at 52-weeks-plus in October must have been: 14,084

We can account for some of these in the published RTT data:

The pressure on one-year waits is going to ramp up in the coming months, and there is the tantalising possibility that the new “zero tolerance” penalties may finally bring one-year waiting to an end. This is important: even if the waiting list is still full of data errors, there will inevitably be some real patients among them who need to be identified quickly and treated (just as some 9,075 real one-year-waiters have been admitted since September 2011).

The new “zero tolerance” penalties are being applied from April 2013 and they are severe: a £5,000 fine every month for each 52-week-plus waiter on the list (see Section A schedule 4B on p.45). Even for expensive procedures like joint replacements, clearing the one-year-waiters is now a must.