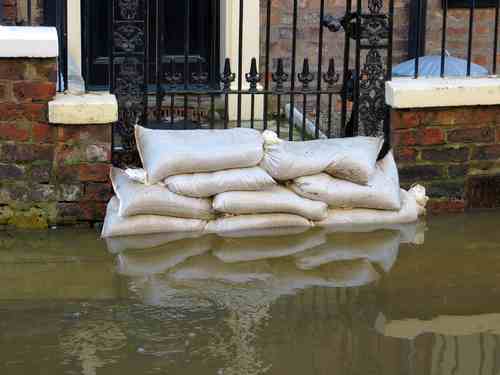 I don’t know if you’ve noticed, but it’s been a bit floody this winter, and the Environment Agency has been coming in for a bit of stick. And if you work in one part of the public sector, it’s always interesting to stick your nose over the fence and see how some other part copes in a crisis.

The Environment Agency has to deal with flooding on many levels, because it happens on various scales and for various reasons.

Some of the threats are very large-scale. The British Isles are slowly tilting towards the south-east as Scotland rebounds from the weight of the ice-age glaciers. On top of that you have a long-term global rise in sea level of around an inch a decade. That adds up to a steadily-increasing flood threat to London, especially when the tide is high and there’s a storm surge coming down the North Sea. So London has a massive flood barrier at Greenwich that can be raised whenever it’s needed.

Then there are more localised threats around particular rivers and rainfall catchments. Some of these risks can be reduced by maintaining river capacity (as the people of Somerset have been reminding us recently): if river and ditch channels are kept cleared and dredged in the right places then water can run off faster into the sea. Alternatively water can be held back in selected places, by maintaining flood plains, water meadows, and grassy urban areas to soak the water up and slow its movement downstream. By managing capacity and flow, the risk of damaging floods can be kept down.

But sometimes the floods do come, and unless your area has flood defence barriers then it’s out with the sandbags and polythene sheeting. If your final defences fail, then it’s time to carry the telly upstairs, make as dignified an escape as you can, and hope your poor home isn’t too much of a wreck when you get back to it.

Flooding is a mostly natural phenomenon, so these countermeasures are designed to forecast, mitigate and defend. Is there anything the NHS can learn from the Environment Agency’s approach and experience?

In NHS waiting lists we also find large-scale threats: the national waiting list has been rising for more than a year now, as government debt holds back public spending and the NHS falls behind demand. And there are local threats, when individual hospital services pop up with waiting time breaches.

The NHS is actually pretty good at the large-scale forecasting and mitigation. The business case process, for capital build and consultant appointments, evaluates demand and puts lumps of new capacity more or less where they are needed.

Defences against short term threats are pretty effective too. If breaches are looming at the end of the month, operational managers rise to the occasion and haggle out extra sessions and patient rebookings, and so the problem is headed-off for another few weeks. So that’s the sandbags and polythene sheeting end of the problem sorted out.

But what about the middle bit, the one where some of the drainage channels need clearing and dredging?

The demand for healthcare is constantly shifting, and if capacity doesn’t adapt then some waiting lists are going to grow. The key timescale is from six weeks to several months into the future: this is when annual leave has not yet been finalised, most sessions remain unbooked, and there is greater flexibility to adjust capacity a little and often. By adjusting capacity on this timescale, you can keep up with those longer-term drifts in demand, and anticipate predictable seasonal events like the summer and Christmas holidays.

Unfortunately, this is where the NHS is less effective, and quite a lot of metaphorical sandbag-flinging could be avoided with a little well-targeted ditch clearance. The NHS does plenty of local “defend”, but not so much of the “forecast and mitigate”.

What to do? Well we need to “forecast” first, because that tells us how to “mitigate”. The Environment Agency does a lot of forecasting, and that is what we need to replicate in the NHS. But each (fairly self-contained) river system on the Environment Agency’s map is equivalent to just one (fairly self-contained) subspecialty in one NHS hospital, so the NHS needs to monitor and forecast a lot more things. The good news is that each of those forecasts is not as complicated to produce as the Environment Agency’s, although it still needs to be in enough detail to plan weekly sessional commitments.

I don’t know if you’ve ever seen a spreadsheet that tries to do week-by-week forecasting, but the last attempt I saw had over 100,000 cells and the Trust eventually gave up populating it. At the risk of stating the obvious, it does need to be physically possible to produce these medium-range forecasts, and update them at least every quarter and preferably every month.

Could you automate the forecasts? In most hospitals the answer is now “yes”, because today’s information systems link enough data to pump out all the inputs needed for the analysis, and those queries can be run automatically at regular intervals. That data can then be turned automatically into detailed forecasts using the Gooroo Planner API.

So now computers can churn out the forecasts, as often as you like, in as much detail as you like, and as far into the future as you like. With that taken care of, managers can use the forecasts to get on with the mitigation: managing capacity and flow.

So put away those sandbags, you’ve got some river channels to manage; that’s the real way to stop rising demand from turning into a flood.

If you haven’t seen how Gooroo Planner can automate your regular operational planning, drop us a line and we’ll be happy to come and show you. Just email info@gooroo.co.uk