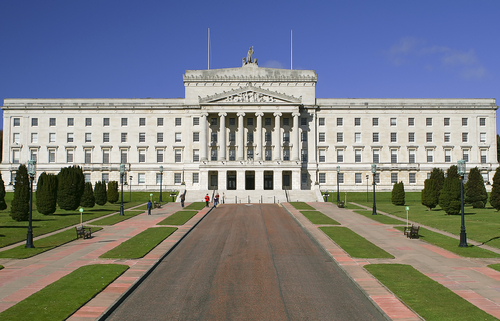 The last time I visited Stormont, as a Treasury official in the early 1990’s, Northern Ireland was under direct rule. The Parliament building, standing grandly at the top of its mile-long avenue, whose lines of trees gradually splay outwards to exaggerate the perspective, wasn’t a parliament at all. After our meeting, the Finance Director of the Civil Service kindly unlocked the Senate Chamber so that we could have a look inside. Like much of the building it was magnificent, but disused.

It’s very different now; the building fairly hums with life. Over lunch in the private dining room (lavishly decorated in hand-printed silk) MLAs from opposing political parties exchanged friendly banter and risky jokes, as well as serious matters of policy. Health, one MLA reflected, affects people’s lives very deeply, in ways that the more bureaucratic parts of government do not.

After lunch we got down to business. Downstairs in the Senate Chamber, now back in use as a committee room with TV cameras, Hansard reporters, and all, I appeared before the MLAs formally as a witness (video/audio, transcript). The Health, Social Services and Public Safety Committee of the Northern Ireland Assembly is concerned about NHS waiting times. As well they might be.

Although the number of patients on Northern Ireland’s waiting lists has changed little this century, the record on waiting times is decidedly patchy. Since 2008 the targets have changed no fewer than 7 times (with another change due in March), with a total of 23 targets implemented for outpatients and inpatients/daycases; of those 23 targets, only 6 were met.

The style of targets is odd too. For instance, the current target for outpatients is that 70% of patients should wait no longer than 9 weeks, with none waiting longer than 18 weeks. One of those targets is met, but not the other. Which one do you think they’re achieving?

The answer becomes obvious if you phrase the target in a different way. The first part of the target says that, of every 10 patients you see, at least 7 must be short-waiters and no more than 3 may be long-waiters. That is easy enough to implement: you just pick patients from the waiting list in at least a 7:3 ratio. The NHS is meeting that one. But it restricts the capacity available to treat long-waiters, so it pushes up waiting times and puts the long-stop 18 week target out of reach.

The rhetorical question I put to the Committee is this: how do you design a ‘good’ waiting times target? I argued that the answer falls into three parts:

RTT is better because it captures the whole patient journey, including the awkward bit in the middle where patients can get stuck in repeated follow-up outpatient appointments. But RTT is also much more difficult to measure, especially if you’re measuring the waiting list (as opposed to back-calculating RTT waits as patients are treated).

My advice is that Northern Ireland should move towards RTT, but retain stage-of-treatment while it’s phased-in, and get advice on the practicalities of RTT data collection from somebody who’s actually done it in an English or Scottish hospital.

The problem with 100 percent targets is that some patients will want to delay or rearrange their treatment, and it is unreasonable either to shoehorn the patient into the target or blame the hospital for the patient’s decision. If you create exceptions to cover all the possible scenarios, those exceptions get very complicated very quickly. Worse, they can be perceived as loopholes that hospitals use to game the targets.

So it is much better to pick a 90-something percent target, and let the tolerance absorb any patient choice without needing all the complicated rules.

If the target is based on the waiting times of patients treated, then it is very easy to meet: just don’t treat any long-waiters (or only a few). So that style of target has serious perverse incentives: it prevents hospitals from doing the right thing and treating those patients who have waited longest. It is much better to set a target that limits long-waiters on the waiting list, because then you prevent long-wait backlogs from building up and this perverse incentive goes away.

Putting it all together, a ‘good’ waiting times target is where 90-something percent of the RTT waiting list must be within x weeks (and England has implemented an example: that 92 per cent of incomplete pathways must be within 18 weeks, with no adjustment for clock pauses).

But in tackling their waiting times, Northern Ireland’s MLAs should think about something else too: are targets the best approach?

Targets distort human behaviour: that is their purpose. Some of those distortions will be beneficial, some won’t, and the trick is to maximise the benefits and keep the nasty side-effects to a minimum. Even a relatively well-designed waiting times target can have unintended consequences, such as gaming the validation process, delaying care for urgent patients, or “forgetting” to count some parts of the waiting list.

That is why any waiting time target should ideally be a backstop, a minimum standard of service, and not literally a target to be hit as accurately as possible. Real service improvement can then come from serving the needs of the patients.

Waiting times are a product of two things: the order in which patients are treated, and the size of the waiting list. If you manage patients in the right order, then urgent patients will be treated quickly (that’s safe), routines broadly in turn (fair), and hospital capacity will be well-utilised (efficient); and if the waiting list is also getting smaller then average waits will come down (which is how you achieve short).

In the long run this, not a direct system of targets, is the way to manage waiting times. Then we can move ever-closer to ending involuntary waiting in the NHS.