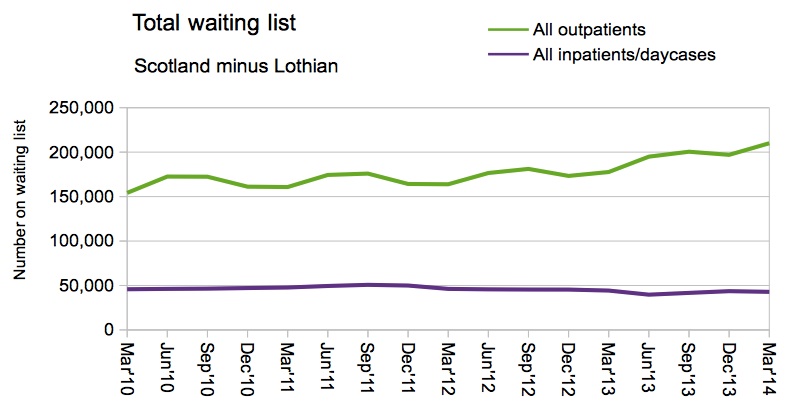 Scotland’s long-waiting outpatient figures improved sharply in March, bringing to a decisive end the long deterioration which began two years ago. However the total outpatient waiting list continued to grow, suggesting that beneath the surface the underlying pressures are still increasing.

Scotland also monitors referral to treatment (RTT) waits, but they are measured (and targeted) only as patients’ clocks are stopped. Because this measure has been found in England to readily distort around the target it cannot be relied upon to reflect the experience of all patients. Similarly, the current spate of 18-week breaches which caught the headlines (and which I warned about 6 months ago) tell us that a problem has developed in the past, but not whether things are now worse or better. So the charts below show only the ‘ongoing’ (i.e. still-waiting) outpatient and inpatient/daycase waits.

Some notes on the data: All the data presented here comes from ISD Scotland. I have excluded Lothian which has had exceptional difficulties of its own, and readers in England should be aware that Scottish waiting times are relatively heavily adjusted for clock pauses and resets. The December 2013 figure for outpatient long-waits has been significantly revised in the latest data; the previous set of data showed an increase that quarter whereas the latest data shows a decrease.