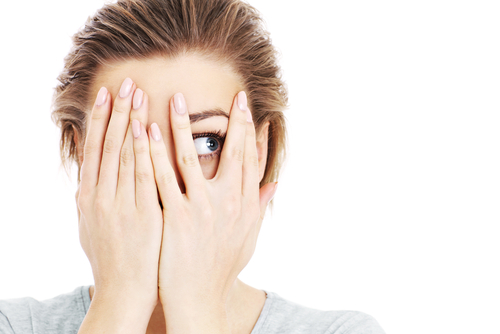 18 week waits and the General Election

The NHS in England is having a having a drive to control the growing national waiting list. And about time too, because the list has grown by over half a million in the last two years and is on the point of passing 3 million for the first time since March 2008.

We have already had breaches of one major waiting times target (the “adjusted admitted” one), so it’s clear that the pressure is already on. The question is: can all the 18-weeks targets be sustained in the run-up to the General Election?

If the national waiting list were a simple queue, like in the Post Office, then the sums would be easy. In a first-come-first-served queue, everyone has the same waiting time which is equal to the number waiting divided by the throughput rate. For the English waiting list that comes to 9.4 weeks from referral to treatment (RTT). That’s a similar concept to “clearance time”: how long it would take to treat the waiting list if nobody else was added to it.

But the English waiting list is nothing like a simple queue. To start with, there are as many queues as there are sub-specialties and stages of treatment and hospitals. The queues aren’t first-come-first-served, because urgent patients are rightly fast-tracked. Then there is randomness, disruption from cancellations and removals, and all manner of inventive patient scheduling practices.

All of which means much longer waiting times for some patients, shorter waits for others, and that is why the longest waits are of such interest to the public.

We can model some of these factors pretty well, but for others we will need to make an educated guess. So here goes. (The chart below uses the same methodology as the monthly waiting times analyses at organisation and specialty level.) 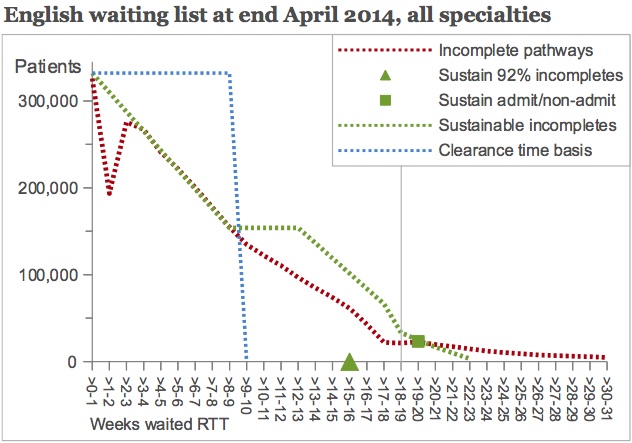 In the chart, the red line with the long tail is the actual English waiting list. The blue line shows the list as a simple queue with a 9.4 week wait for everyone. Then the green line and symbols show our model: it’s what the English waiting list would look like if it were managed well as a single queue, allowing for clinical priorities and disruption.

The detailed assumptions are that: 1) The waiting list is managed as a single fully-booked queue. 2) Just over half the patients are urgent, because that is the proportion currently admitted within 62 days of referral; this overestimates urgency (probably a lot) but it’s valuable because it offsets the single-queue assumption. 3) About 15 per cent of patients are removed without treatment. 4) The RTT referral rate is 332,000 patients per week, estimated by extrapolating the waiting list back to the axis. A detailed explanation of the waiting times calculation method can be found here.

The model suggests that 92 per cent of the waiting list should be within 15.8 weeks (shown by the green triangle). In real life it was 16.3 weeks at the end of April, which is fairly close (and well inside the 18-week target).

So our two big crude assumptions (a single queue, and current rates of admission within 9 weeks RTT) seem to be working together to give answers that are reasonably close to reality. Now we are ready to answer our original question: what are the risks of failing against the 18 week standards in the run-up to the General Election?

Both our model and the recent breaches suggest that the current list size is flirting with failure on the “adjusted admitted” measure, and needs to stay below 3.0 million for a clean 18-weeks record. We can also estimate that if the list grew as big as about 3.3 million then the “incomplete pathways” target would come under threat too.

Even if the elective care fund were to have no effect at all, the waiting list would probably not reach 3.3 million before the end of February 2015 (the last statistics snapshot before the election). So the incomplete pathways target looks pretty safe.

But can the waiting list be held below 3.0 million as the election approaches? That is more doubtful, so the adjusted admitted target looks set to remain at risk.

There is a further possibility. As the election approaches, there may be a particular focus on sustaining the adjusted admitted target. If that target’s perverse incentives come to the fore, and the NHS avoids treating long-waiters on a large scale, that would make an additional incomplete pathways breach more likely.

Whichever way you look at it, 18-week waits are set to be a real nail-biter.