Planning healthcare in the ultimate detail

If you’ve been knocking around the NHS for any length of time, you’ve probably built a spreadsheet capacity plan. In the process you’ll have discovered a couple of things: firstly, that this kind of modelling is surprisingly difficult to do well; and secondly, that modelling the year in one big lump tells you what needs to be done, but doesn’t tell you how to do it.

So the next step is to break that plan down week by week. That tells you the beds, theatres and clinics needed every week, and the waiting time trajectory you can expect. Now that’s a basis on which you can take action.

Can you go further? When it comes to the waiting time trajectories, operational managers often want greater reassurance that those waiting times are achievable in real life. And there is no better way to demonstrate this than by modelling the individual patients being booked.

Now you might be thinking that this sounds crazy. Breaking a year’s work of plans down, week by week, sounds do-able. But patient by patient? Well, why not? You wouldn’t want to do it manually, but it should be possible using a computer. Shouldn’t it?

Indeed it should. What’s more, we’ve just built it. Everything I’ve just described is already available in Gooroo Planner, and now I’m going to show it to you.

Let’s start by modelling a big lump of time. The example below shows a six month backlog clearance plan, and if you follow the arrows from the bottom left, you can see that it’s set to achieve a target 6 week wait for outpatients and 8 weeks for electives. For outpatients that means reducing the list size from 918 to 550 which means non-recurring activity of 368.

At the same time as doing the backlog clearance, the outpatient service also needs to keep up with recurring demand of 2,572 patients. So if you add the recurring and non-recurring elements together you get the total outpatient activity plan of 2,940 which is 16% higher than the past activity rate.

If you increase outpatient activity, what happens to elective demand? It goes up too. The extra 368 outpatients convert to extra demand of 38 inpatients and 45 daycases; that’s on top of the recurring and non-recurring activity they need to do to sustain 8 weeks.

Let’s look at the inpatient service in more detail, because it’s the most complicated one. We can break the elective inpatient plan down into week by week activity (in blue, with urgent demand shown in orange):

And we can get the theatre time required every week, both for elective inpatients (in blue below) and total theatre time (which in this example is shown for the whole specialty, in orange). Beds and clinics are available too but I won’t show them here.

Finally for the week by week profiles, here is the waiting time trajectory we should expect every week, both for elective inpatients (in blue) and for comparison against RTT waits we have the outpatient waits plus the highest elective wait (in orange):

You can see that waiting times for this service (in blue) first hit the target in April, bounce, and then come back in on target at the end of the period. Which is all very well, but at this point an operational managers might legitimately ask: are these waiting times really achievable?

So now let’s look at it patient by patient. Did you notice, when we looked at the whole time period in one lump, that each service had three buttons above it? The first button takes you straight to the week by week profiles, the second allows you to edit the performance assumptions for that service, and the third takes you straight to the patient by patient simulation. If you click that third button, this is what you see:

Briefly, this is what you’re looking at:

We can see on this image that a few patients are waiting a very long time – the longest (on the far left) is 60 weeks. Some urgent patients (in red) have also been severely delayed – the longest has waited 34 weeks already. The light green and yellow routine patients are coming in at short notice, even though other patients have waited longer; and before you say, yes, there may be subspecialty differences, so in the model itself (though not these screenshots, sadly) a tooltip gives further details if you hover over any patient, and you always have the option to run the model at subspecialty level if you prefer.

In the model this simulation has a Play button, and when you press it the patients move around on the screen as they arrive, are booked, and come in, all in line with the demand and activity profiles you had in your week by week plan. After two simulated months of better scheduling and planned backlog clearance, the waiting list looks like this: 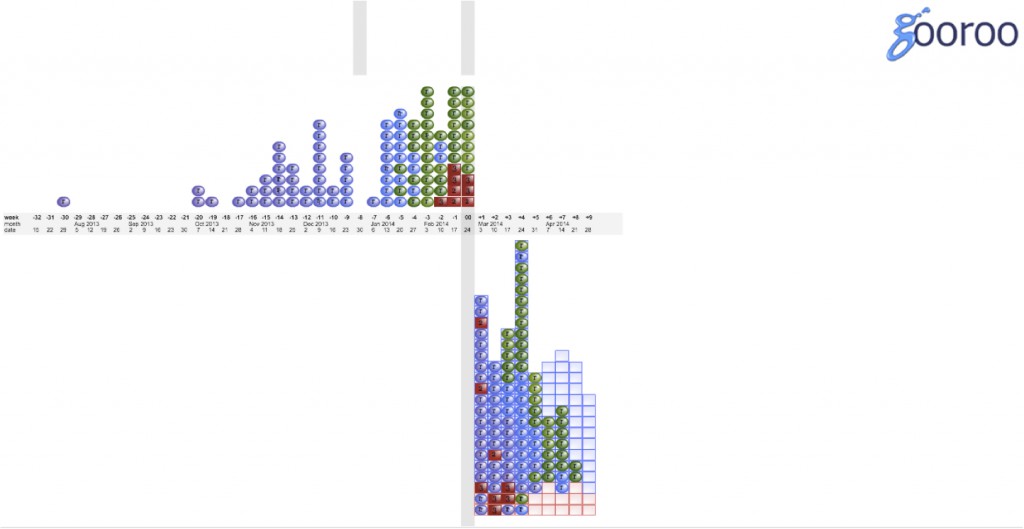 After four months, when the waiting time targets are achieved for the first time, the shape of the waiting list has dramatically improved: 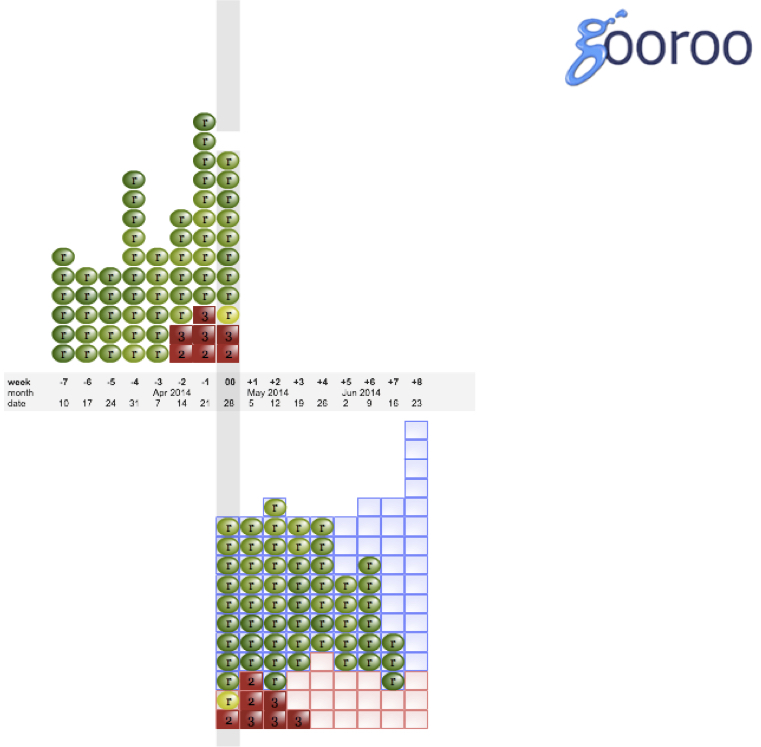 And at the end, when the waiting time targets are achieved at the end of the period, it looks like this (when we specified the target, we set it so that 90 per cent of patients need to be within target as they are admitted, so a few breaches are still permissible): 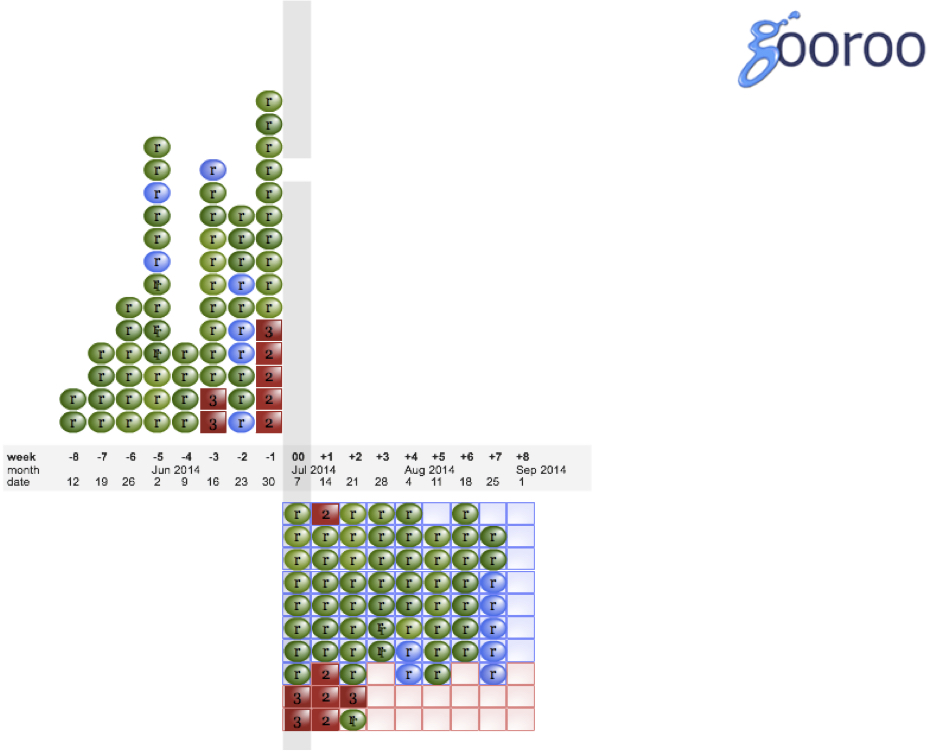 The waiting times calculated in Gooroo Planner are based on study of this simulator and the well-scheduled waiting lists it produces. So they allow properly for clinical priorities and disruption such as removals and cancellations, and can be thought of as the best waiting time that is safely sustainable with that size of waiting list.

So there you have it: whole-period, week-by-week, and patient-by-patient modelling, with all the detail just one click away from the main report screen in Gooroo Planner.

If you’re already using Gooroo, you probably have week-by-week planning already; you just need to make sure you’re uploading patient level waiting list data for the start of your modelling period, and the patient level simulation will be available automatically.

If you aren’t using Gooroo, then get in touch and we’ll be happy to show it to you properly: just email info@gooroo.co.uk.