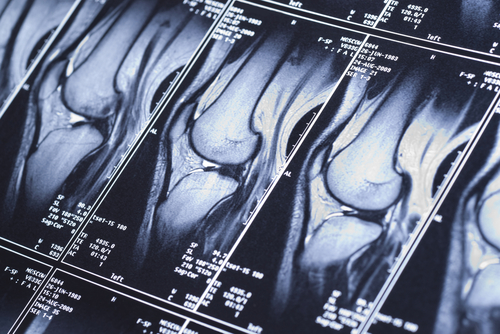 Modelling the bit in the middle: diagnostic stages of treatment

Poor Mr Bloggs has a dodgy knee. So he hobbles down to his local practice, where the GP says she doesn’t like the look of it. She refers him to see a consultant, and he is added to the waiting list for a new outpatient appointment.

Six weeks later, Mr Bloggs finally sees the consultant, at which point one of three things might happen:

The question is: how can we construct a capacity planning model for this 2- or 3-stage pathway, with the intention of delivering the 18-week referral-to-treatment (RTT) promise for Mr Bloggs, and for all the other Mr Bloggses who come to our hospital?

When we are planning capacity, we can’t just model the whole RTT pathway in one big lump. We need to model each stage of treatment separately, so that we can plan clinic capacity separately from bed and theatre capacity.

Fortunately the new outpatient stage is quite straightforward. We don’t know in advance whether Mr Bloggs will be discharged, listed for admission, or sent for diagnostics, so we have to see him quickly enough to accommodate any of those possible outcomes. That means we can model all new outpatients for this pathway together, and all with the same waiting time target of (say) 6 weeks.

But then it gets more complicated.

We could model these two groups of patients as two separate, parallel pathways: one with a single wait of up to 12 weeks, and the rest with two consecutive waits of up to 6 weeks each. But that would be a bit of a nightmare data-wise; could you really identify retrospectively which pathway any patient was on at any given point in time, and consistently separate all their waiting list movements and snapshots?

You’re very welcome to try, but fortunately there is a much easier way.

Think about those patients who have a diagnostic stage and are then added to the elective waiting list. They only have about 6 weeks left on the clock, so effectively the hospital is going to book them in quickly as if they were urgent. And this simplifies things enormously because we can model them in exactly the same way – as if they were urgent.

1) Model all new outpatients together, in the usual way, for a waiting time target of 6 weeks.

2) Then model all elective patients for a waiting time target of 8 weeks, and in your patient-level activity data just classify a patient as urgent if they either had a diagnostic stage or were actually clinically urgent.

(The more alert of you will have spotted that 6 + 8 = 14 weeks RTT, not 18 weeks RTT; the extra 4 weeks provides a margin to allow for suboptimal patient scheduling.)

3) If you like, you can also model the diagnostic stage of treatment explicitly, and a method for doing that is described here.

Some clinical services send nearly all of their patients for an intermediate diagnostic stage, in which case the purpose of the first outpatient clinic is usually to decide what kind of diagnostic they need. Then the modelling is even simpler, because all routine elective patients can wait around the same amount of time, and we can simply allow 6 weeks for the first outpatient stage, plus 6 weeks for the diagnostic stage, plus 6 weeks for the elective stage (or whatever balance you prefer). Allowing for suboptimal scheduling, you might set the targets to 5+5+5 weeks.

At the initial one-day implementation of Gooroo Planner we usually leave diagnostics on the ‘to do’ list. But it’s an important refinement to your modelling, and one that you might like to take in fairly early on. As always, we are more than happy to support you if you have any questions.