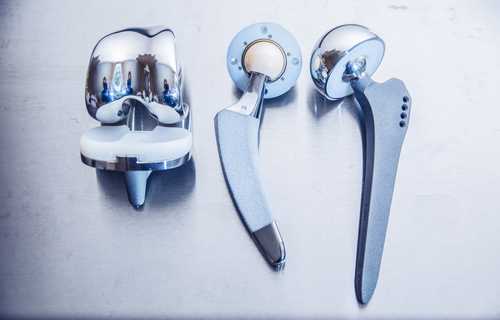 The English NHS triumphed in its ambition to halve the number of patients waiting longer than 52 weeks during 2018-19, thanks to a late surge that reduced numbers to their lowest level since August 2016.

But it was bad news for the other elective ambition: to stop the waiting list from growing overall. Not only did it grow substantially during 2018-19, but during March it broke the record to become the largest RTT waiting list ever reported (the previous record having been set back in August 2007 when data was collected for the first time).

Waiting times continued to hover around the 22 week mark as the financial year came to an end. 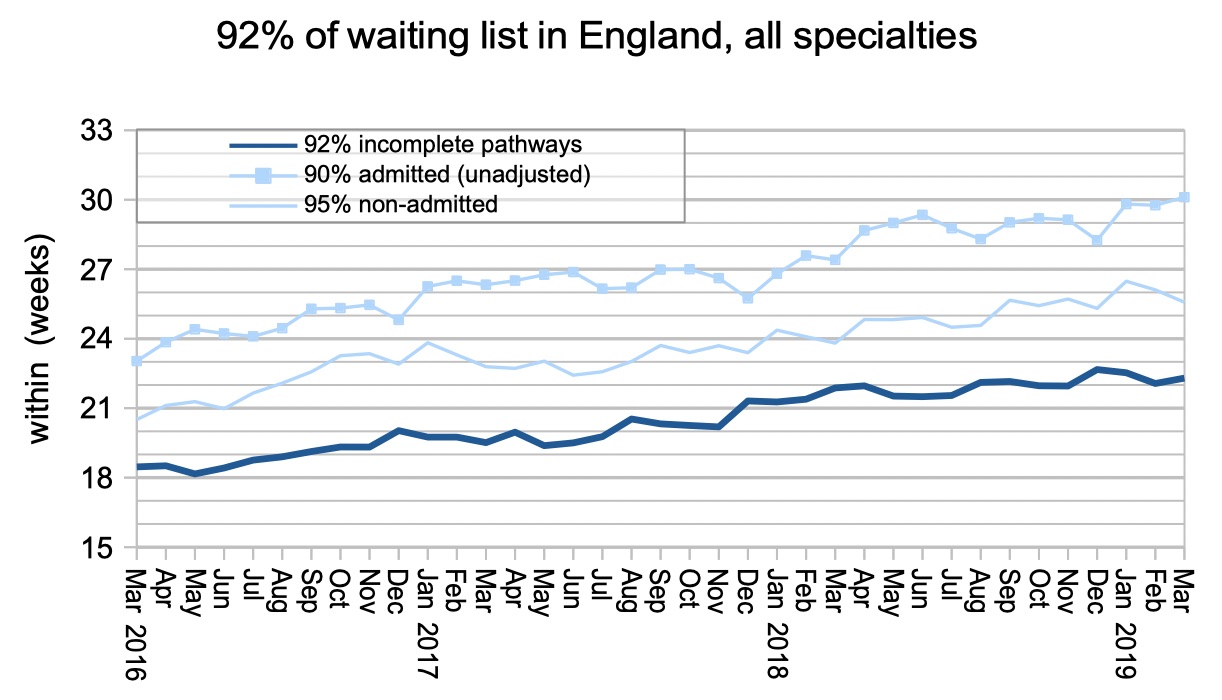 Only two trusts are listed as not reporting RTT data, now that Gloucestershire Hospitals NHS Foundation Trust have resumed with a waiting list 6,639 patients bigger than they left with in November 2016.

Returning to the reported data, until recently the first ever RTT waiting list was also the biggest: back in August 2007 there were 4,186,974 patients on the waiting list and that level has been unbeaten. Until now: at the end of March 2019, 4,232,436 patients were reported on the waiting list. But that data is of course confounded by non-reporting trusts who don’t appear in the figures, and if you add them back in then the record was actually broken nearly a year ago.

The waiting list data charted below is based on the reported figures (without adjustment for non-reporting trusts), and the sharp rise in March 2019 is partly caused by Gloucestershire Hospitals NHS Foundation Trust returning to the data series. But the waiting list grew by some 38,000 patients even after non-reporting trusts are factored in, so much of the growth was real. 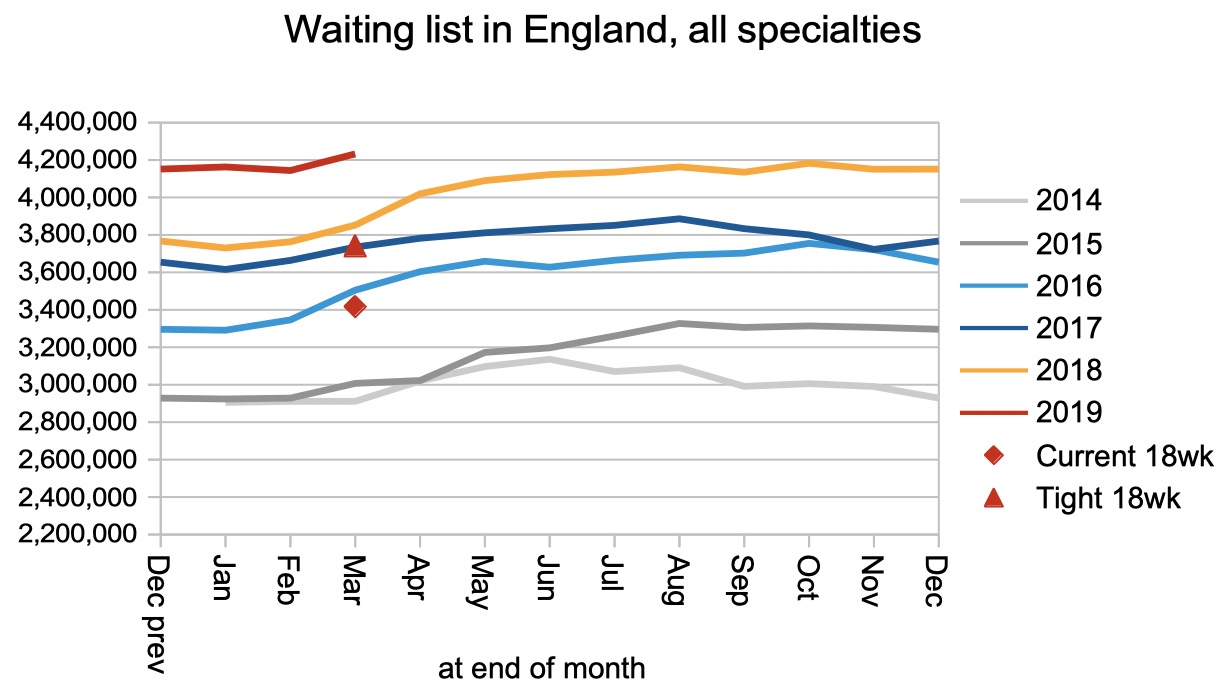 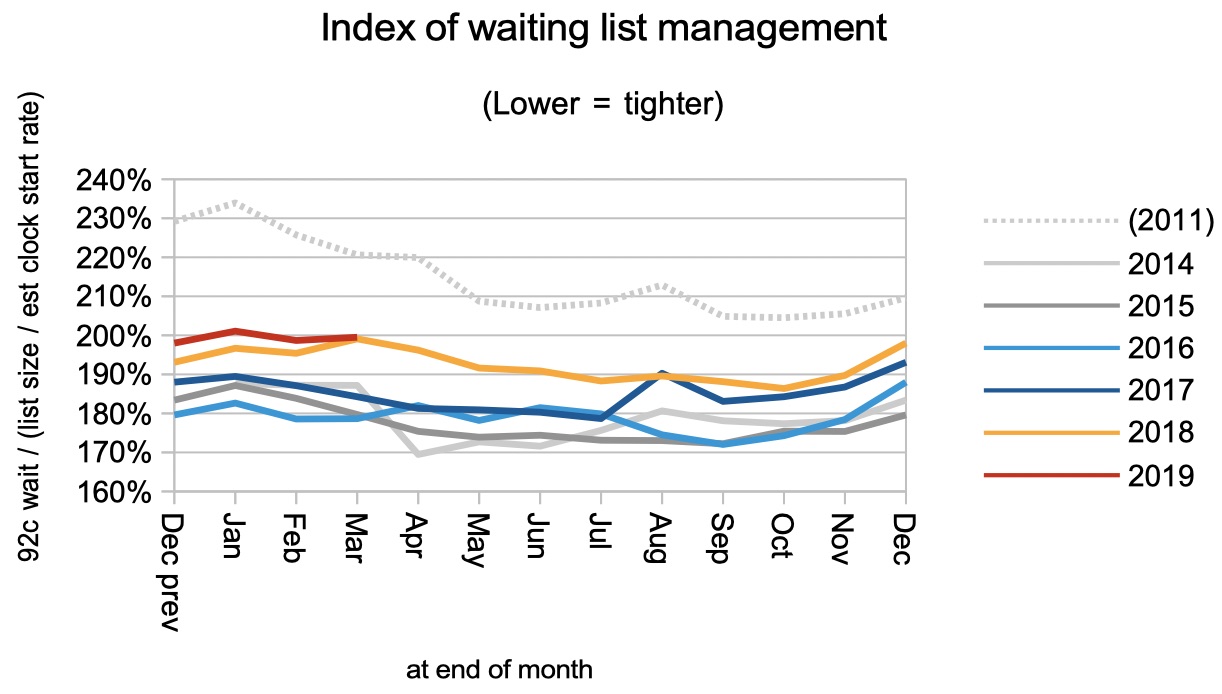 Admissions per working day continued to beat last year’s exceptionally low performance, but fell short of the levels typical of other recent years. 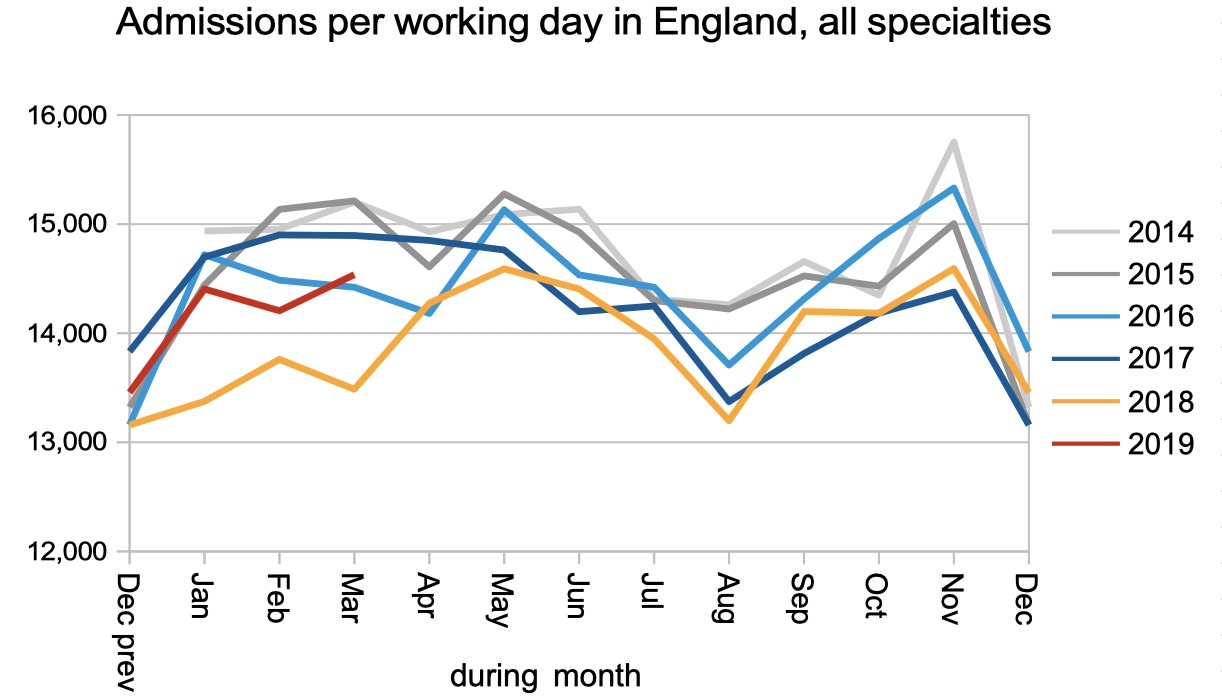 The big success story of the month was one-year waits, which were successfully halved during 2018-19 after an unpromising increase in the first quarter. NHS England and NHS Improvement’s statisticians have done a careful analysis of this, based on both the reported figures and looking only at trusts who reported at the start and the end of the financial year. To cut a long story short, one-year waiters were better than halved either way. 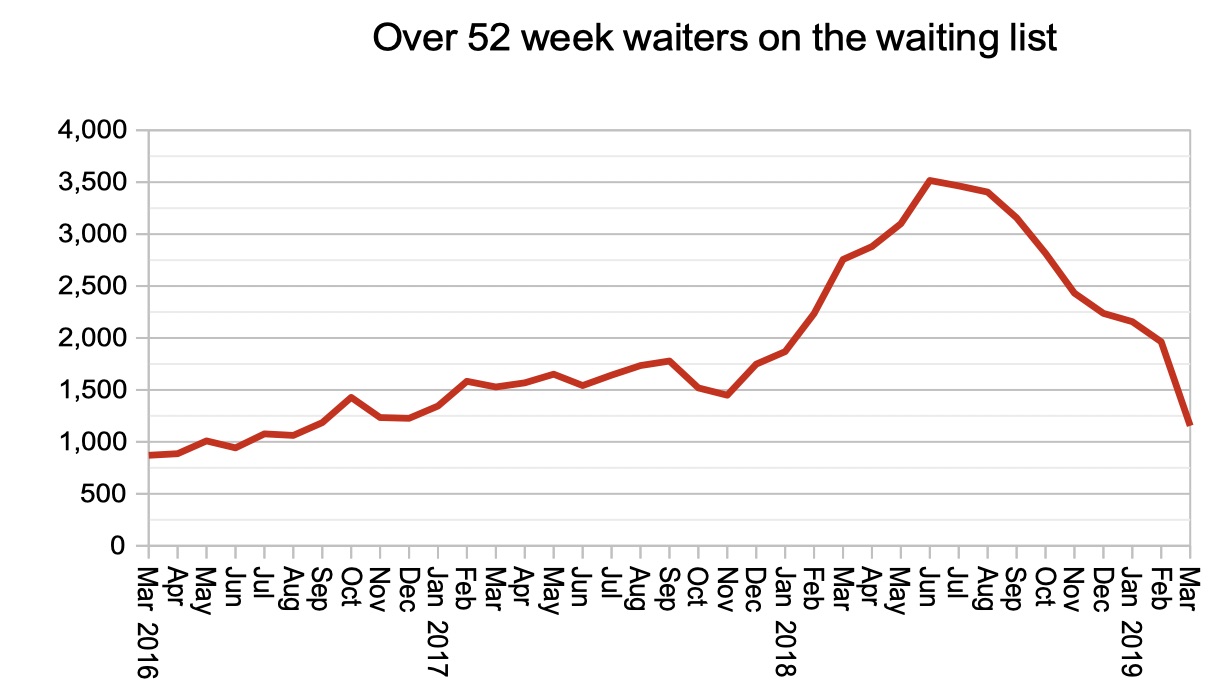 The specialty level picture has been mixed in recent months. 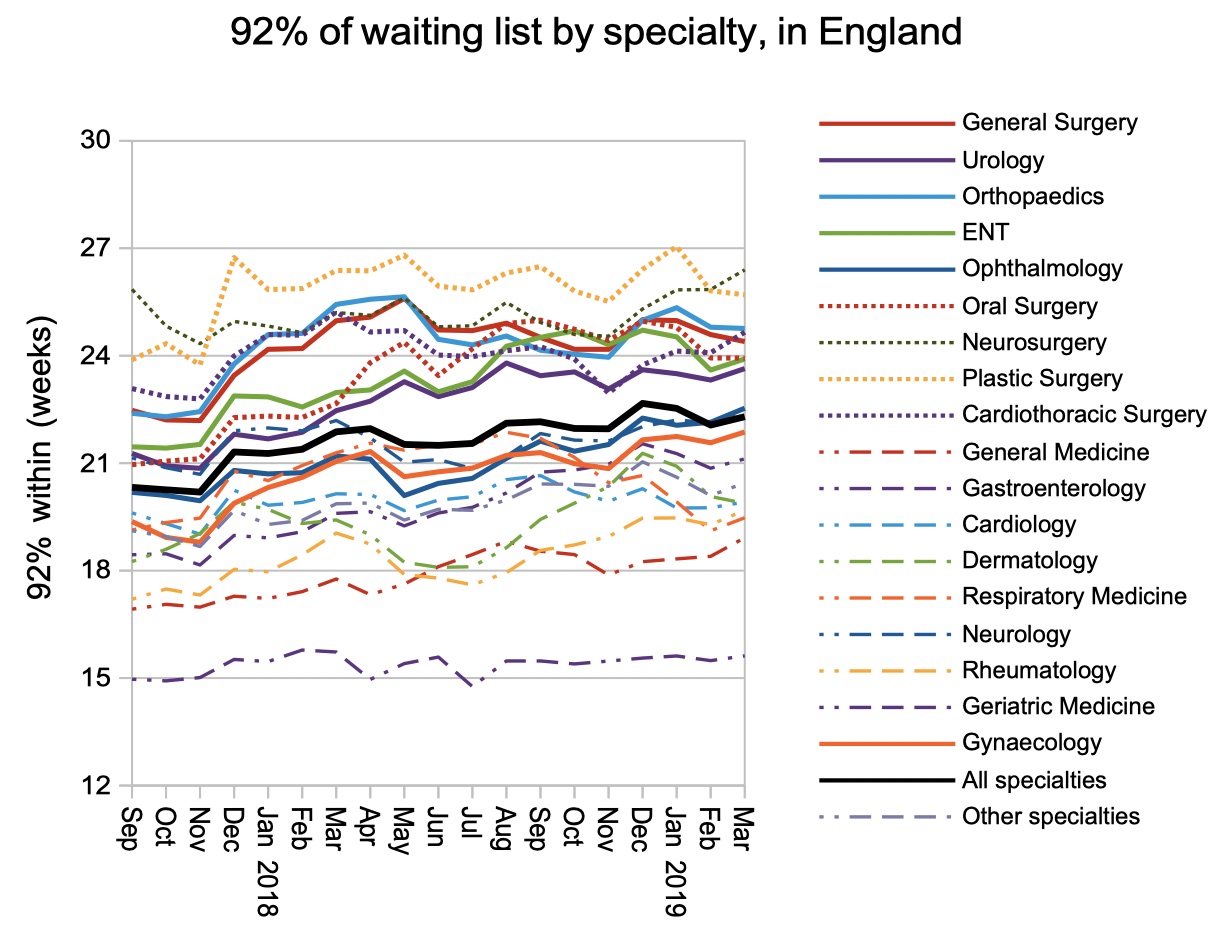 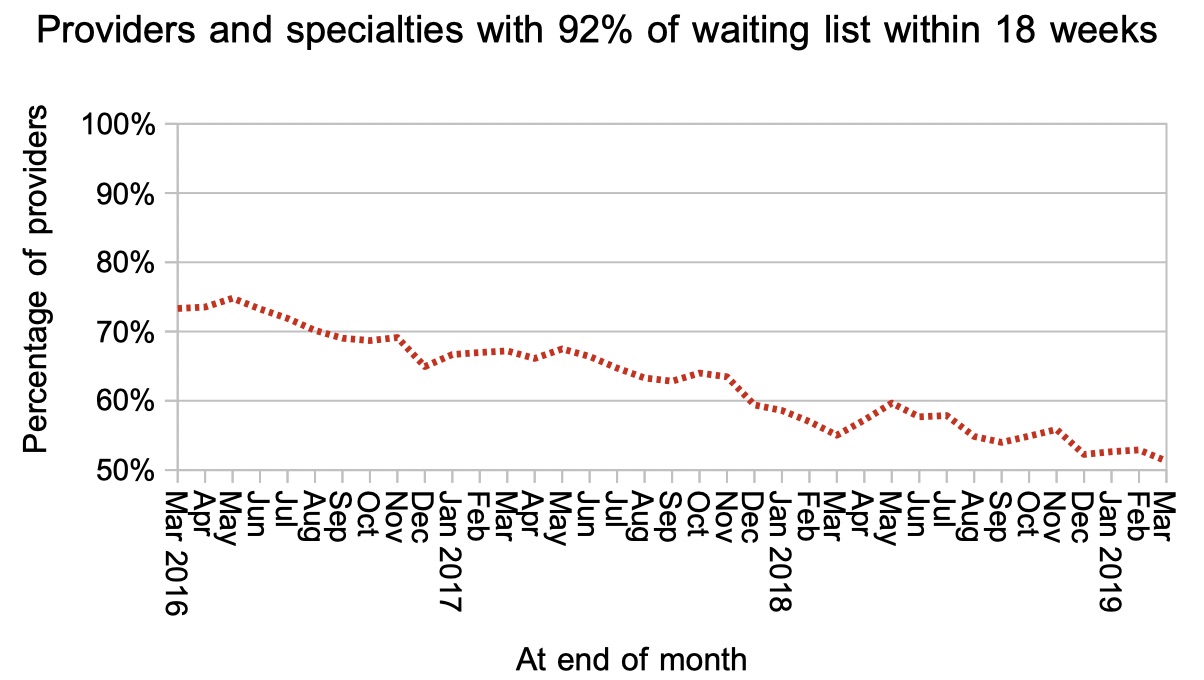 The distribution of waiting times was little changed month on month. 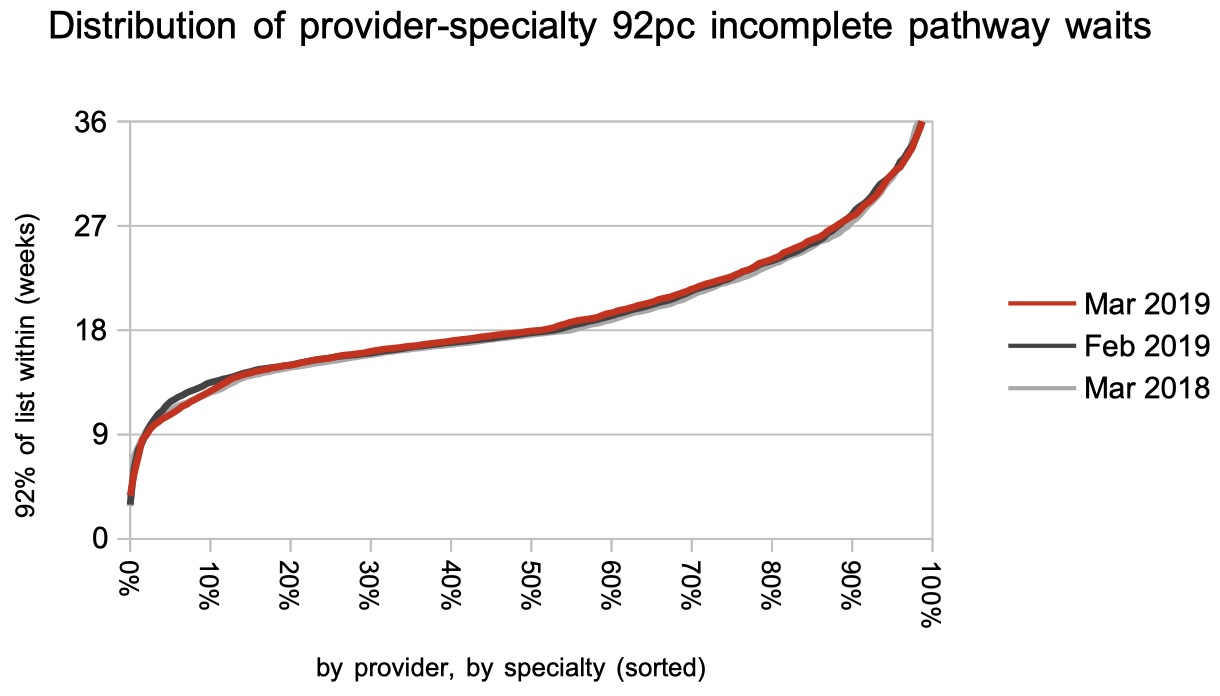 Waiting times have been rising fairly rapidly at North Cumbria University Hospitals NHS Trust in recent months, and the latest rise takes them from 29.1 weeks (the 10th longest in England) in February, to 31.3 weeks (2nd longest) at the end of March.

A couple of new independent sector providers have entered the table, which may reflect overspill from neighbouring NHS trusts with long waiting time pressures.

Referral-to-treatment data for April is due out at 9:30am on Thursday 13th June.