18 week target scrapes through to Election

The government has avoided a pre-election failure of the main 18-week waiting times target, the latest figures show. At the end of February, 93.1 per cent of the waiting list was within 18 weeks, so the English NHS achieved its 92 per cent target in the last statistics before the General Election.

However this will only be a short-term success. Long-term growth in the size of the waiting list has been temporarily paused by a non-recurring waiting list initiative and a one-off increase in waiting list validation. The temporary amnesty on the perverse ‘admitted’ and ‘non-admitted’ waiting times targets came to an end on the 1st of April, and hospitals are again being punished for treating long-waiting patients.

So as the waiting list resumes its long-term growth, and restrictions on treating long-waiting patients return, it is only a matter of time before the main ‘incomplete pathways’ target is breached. This is something the next government will need to address, but there is a recurring cost attached.

Performance on the main target (that 92 per cent of the waiting list should be within 18 weeks) improved in February, giving the government the pre-election tick in the box that it has been fighting for since last summer. The following chart shows how the final push was achieved: the NHS treated large numbers of long-waiting patients, taking full advantage of the amnesty on perverse targets which normally restrict this.

Clearly, treating long-waiters (as opposed to keeping them waiting) is not only the right thing to do, it is a quick and effective way of reducing waiting times. Why NHS England are throwing that away by making the perverse target penalties mandatory from the 1st of April is beyond me.

Waiting times are not just about treating patients in the right order; in the long term, the size of the waiting list is the dominant factor. Here the picture is muddled because so many Trusts are not reporting their waiting list data at the moment.

The list of non-reporting Trusts is the same as in January, and if you add them back in then performance on the main ‘incomplete pathways’ target falls from 93.1 per cent to 92.8 per cent; it was achieved either way. 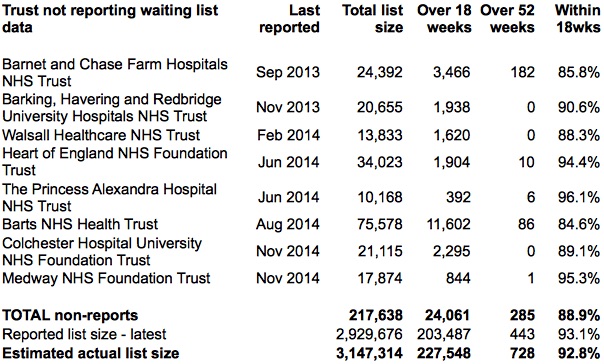 Non-reporting Trusts are not included in the waiting list charts below, but either way the list grew only slightly in February which is not uncommon for the time of year.

There was a welcome but small increase in the number of patients admitted per working day, as the NHS did what it could during a difficult winter.

The long-wait position eased slightly in line with the improvement in ‘incomplete pathways’ performance. One-year waits were almost static at 443, of which some 224 were in Orthopaedics at North Bristol.

Drilling down to specialty level, there was a deterioration in waiting times in Orthopaedics and Neurosurgery (both of which overlap with the highly-pressured subspecialty of spinal surgery), but other specialties improved in line with the overall picture.

The proportion of services (specialties within providers) achieving the main ‘incomplete pathways’ waiting times target improved slightly in line with the overall figures.

The improvement was reflected across the board, for both short-waiting and long-waiting services alike.

There was a large improvement in the number of services apparently managing their waiting times perversely: achieving the perverse admitted and non-admitted targets while failing on incomplete pathways at the start and end of the month. This is to be expected while the NHS is making a big push to treat the longest-waiting patients, and has an amnesty on perverse targets, but is welcome nonetheless.

The Robert Jones and Agnes Hunt (RJAH) have appeared from nowhere to elbow North Bristol off the top of the ‘top twenty’ table as the longest-waiting Trust in England.

The orthopaedics data from the RJAH is interesting: it shows that they have doggedly been achieving the perverse adjusted admitted and non-admitted targets throughout the amnesty, despite consistently failing the incomplete pathways target; so they have apparently been managing their waiting lists perversely for some time.

This behaviour ended abruptly in February, with large increases in the proportion of long-waiters being treated. Fair enough. But oddly, performance against the incomplete pathways target deteriorated sharply instead of improving, and at the same time their reported waiting list size grew.

February is a handy month for tracking patients through their weekly waiting time cohorts, because the month is exactly four weeks long so the cohorts can be lined up exactly. Looking at the RJAH all-specialties data we can see that many of the over-18-week cohorts contain patients who were not reported the previous month. For instance, at the end of February there were 60 reported patients waiting >24-25 weeks. Because the end of January was exactly four weeks earlier, and because the incomplete pathways data does not permit the adjustment of patient waiting times, we would expect the end of January snapshot to show a minimum of 60 patients in the >20-21 week cohort. However only 34 patients were reported, so at least 26 patients have appeared in this cohort who were not there before.

So something must have happened with RJAH’s data. It would be interesting to know what. This is not the first time that anomalies have been seen in this Trust’s waiting times.

Anyway, here is the top twenty for the end of February.