The English waiting list shrank slightly in September, and the 18 week target was met. Both results were expected: the seasonal shrinkage was typical, and patient scheduling is usually relatively good in September with low levels of disruption.

Nevertheless, the English NHS remains on course to breach the target in the coming months, because the waiting list is still growing fairly rapidly year on year, and a longer queue means longer waits.

At specialty level, ENT tipped over into breaching 18 weeks nationally, which means that the only major surgical specialties achieving the target are now ophthalmology and gynaecology.

In my recent forecast I estimated that September’s waiting list would have 3,506,620 patients on it (allowing for non-reporting Trusts). As it turns out, the actual figure was a bit smaller at 3,492,480. This smaller-than-expected waiting list means that England may narrowly avoid breaching 18 weeks in December (although a breach in January is still on the cards).

The picture on long waits performance is that waiting times are still creeping up, and are now getting agonisingly close to the 18 week mark (as the dark blue line in the first chart shows). The NHS is responding by treating record numbers of long-waiting patients (the light blue lines), which is exactly what you would expect and want in these undesirable circumstances. 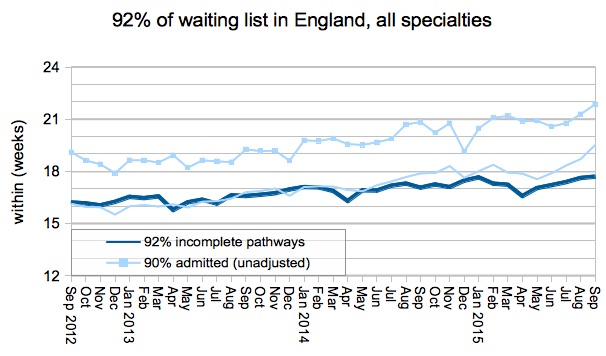 There was no change to the list of non-reporting Trusts in September, which suggests that NHS England’s tougher stance against non-reporting is not yet having much effect. 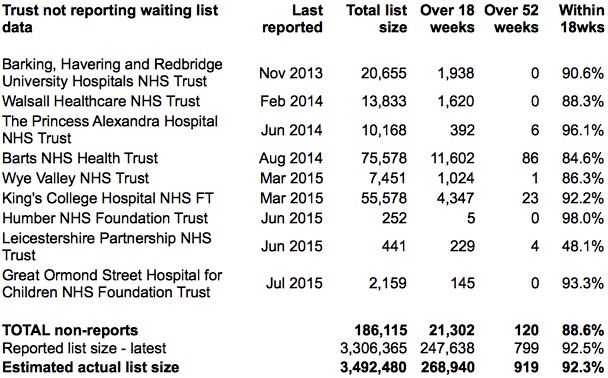 The waiting list shrank slightly, which is normal for a September. But the waiting list is still growing fairly rapidly year-on-year which is why waiting times are going up. Broadly speaking, a longer queue means longer waits.

The chart below is based on the reported figures, so it is not adjusted for non-reporting Trusts. 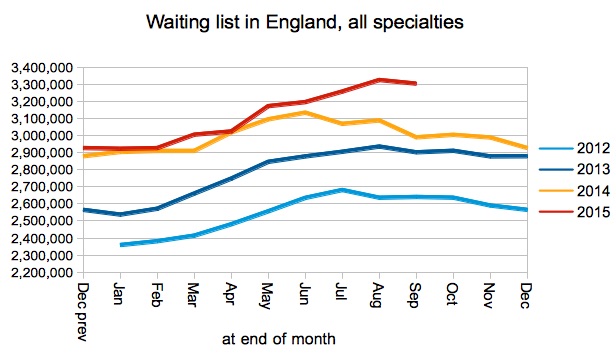 Why is the waiting list growing? In short, demand is rising and activity isn’t keeping up. Admissions in particular are flat on recent years. 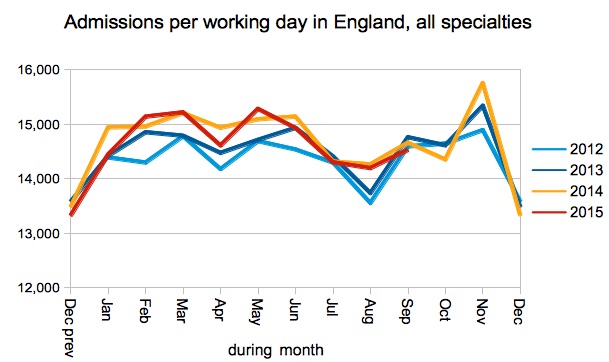 The number of one-year waiters continues to rise, and of course there will be plenty more tucked away in the non-reporting Trusts. Many of these ultra-long waiters are concentrated in just a few providers, with 270 at North Bristol NHS Trust and 260 at University Hospitals of Leicester NHS Trust. The next largest number is 41 at the Royal Free London NHS Foundation Trust, which has taken on the long waits from Barnet and Chase Farm.

Interestingly the number of over-39-week waiters dipped in September, which may be the result of NHS England’s recent focus on over-40-week waits. 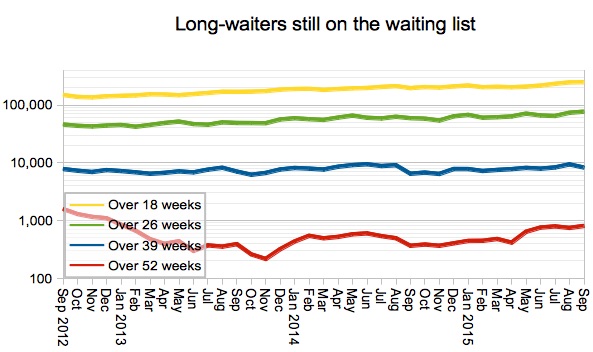 ENT finally tipped over into breach, having narrowly missed doing so last month, leaving only ophthalmology and gynaecology within target among the major surgical specialties. 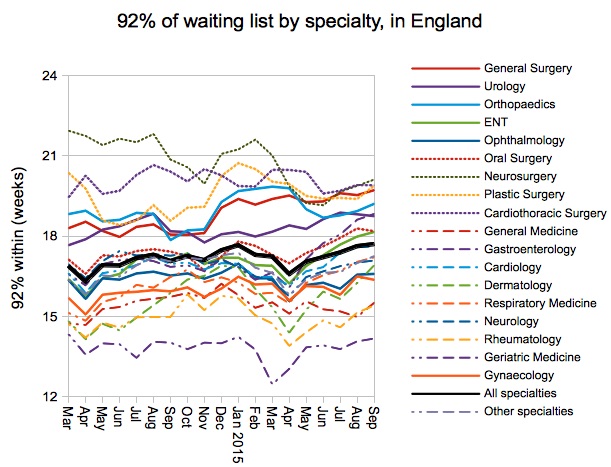 The proportion of services (local specialties within Trusts) achieving the 18 week target declined again to just 77.4 per cent, the worst figure since January and the second-worst in the last three years. 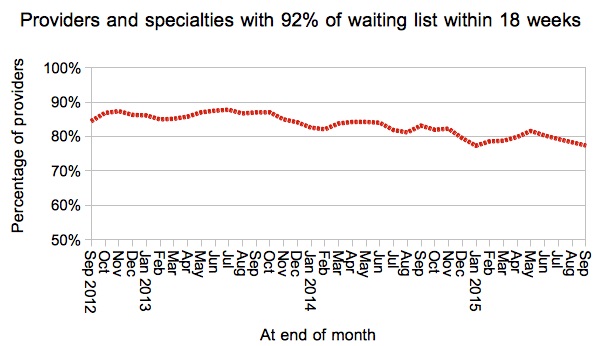 The decline in waiting times over the last year is most pronounced at the long-waiting end of the distribution. 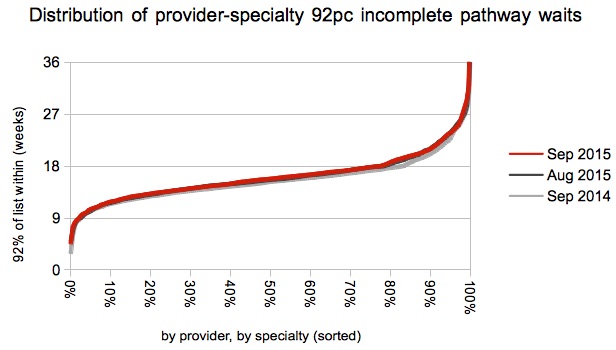 Medway continue to top the long-waits table, and their performance is still deteriorating.

Meanwhile, at the other end of the table, one Trust dropped out of the top twenty but because they were still easily breaching 18 weeks I shall spare their blushes.

It is a sign of the times that even the last Trust in the list has waiting times as long as 19.7 weeks. All in all, some 31 NHS Trusts and 15 independent sector providers were breaching 18 weeks at the end of September across all specialties.