Planning a hospital for constant capacity – a worked example

Previously I outlined how hospitals could reduce the high marginal costs of extra capacity over winter, by rearranging routine activity so that it counter-balances the predictable peaks in medical non-electives. That’s all very well in theory, but how does it stand up in practice? Let’s find out, by producing a constant capacity plan based on real (but anonymised and disguised) data from specialties that share the main ward block in an NHS hospital. 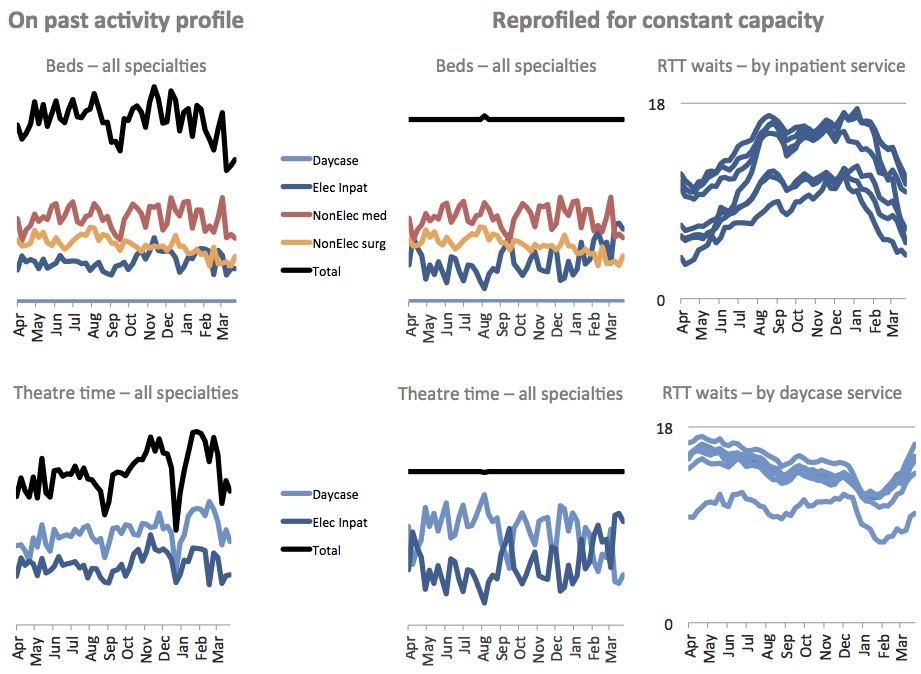 The two charts on the left show how bed and theatre requirements have typically varied week by week, averaged over the past three years. The four charts on the right show how things would look if the hospital re-profiled its routine elective activity to run at constant capacity.

Let’s start with beds – the main bottleneck in most hospitals. The top left chart shows the historic bed requirements, and already this raises questions worth probing: why do medical non-electives reduce so much in September and around Easter, and why do they fluctuate semi-regularly at other times of year? Both suggest that the NHS might be causing the variation, in which case we could perhaps reduce that variation and solve much of the problem at source. Here, though, we will accept the variation as it is.

The top middle chart shows how a plan for constant beds might look. The model (Gooroo Planner in this case) takes non-elective and urgent elective demand as ‘given’, so only routine elective activity has been re-profiled through the year. Routine activity, and consequently elective beds, are therefore increased sharply in September to offset the slump in medical non-electives. But in early August we have the opposite challenge: a peak in medical and surgical non-electives that is so large that the model cannot completely smooth out the beds, even by reducing elective activity to urgents-only.

The top right chart shows the effect of all this on waiting times for elective inpatients, and here I have shown the data at specialty level. Waiting times fall dramatically towards the end of the financial year, as routine activity rises assertively to counter-balance falling non-elective demand. One surgical specialty plummets from a referral-to-treatment waiting time of 18 weeks in January, all the way to just 6 weeks at Easter.

Theatres are modelled in the same way. The model was asked to give constant beds the top priority, so beds are not altered when it comes to smoothing out theatres. The only thing we can change at this stage is routine daycase activity, so the daycase theatre plan becomes the mirror image of elective inpatient theatres (as opposed to broadly tracking them as this hospital has done historically). Daycase waiting times will then vary through the year in the opposite sense to inpatient waits, though the variation is smaller.

So the principles of constant capacity planning worked out alright for this hospital. What insights did we gain? There were a few things we needed to watch out for:

1) Even variations in non-elective demand might have NHS causes; if they can be found and fixed then that would reduce the need to reprofile routine elective work.

3) If there is a lot of non-elective variation then we may not have enough routine activity to smooth out the peaks; even if we do, it may not be possible to sustain both 18 week waits and constant capacity all year round. In that case we must relax the requirement for constant capacity, and have plans to lay on extra capacity (or outsource activity) at peak times. At least can plan this in advance, which should reduce the marginal cost.

4) Computers are good at number crunching, but it takes a human to apply common sense and operational know-how. For instance in real life, and for perfectly sensible reasons, this hospital shuts down routine elective surgery over Christmas; that shutdown will need to be put back into the capacity plan.

Finally, it is worth saying again that constant capacity profiling only works if elective waiting times are allowed to vary through the year, perhaps through a large range. If waiting times remain close to the target all year round (perhaps to avoid penalties for “over-performing” on activity) then there will be no flexibility to reduce routine activity when beds are full. That leaves us with a familiar but unattractive choice: breaching the target, or arranging short-term extra capacity at high marginal cost – the very costs we were trying to avoid in the first place.

or here to see how it’s been used in practice