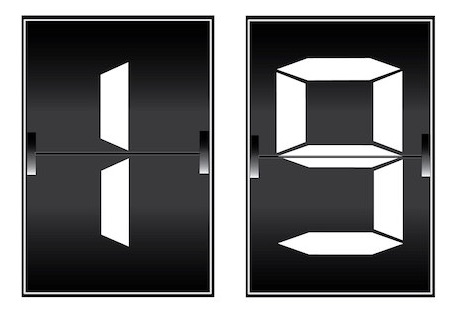 English referral to treatment waiting times lengthened again in September, according to the latest gloomy data.

National waiting times broke through the psychological 19 week mark for the first time since October 2011. All surgical specialties are now breaching the 18 week target – gynaecology was the last to fall. And only 69 per cent of local specialties within trusts are achieving 18 weeks.

The cause? Waiting times are a function of two things: the size of the waiting list, and the order in which patients are scheduled for treatment. Patient scheduling improved sharply when the incomplete pathways target was first achieved in 2012, but has now stabilised at national level with some seasonal variation. So the main driver of elective waiting times is the growing waiting list.

The cure is obviously a smaller waiting list. The NHS would need activity to exceed demand for a while, to reduce the number of patients on the waiting list to a level consistent with the 18 week target. Then it would need to stabilise activity at a level that keeps up with demand, to stop waiting times from growing back again.

However there is little prospect of this actually happening in the current financial climate, which is why I expect referral to treatment waiting times to carry on getting longer. This can carry on indefinitely.

As usual, in the following analysis, all figures come from NHS England. If you have a national statistic that you’d like to check up on, you can download our elective waiting times fact checker.

Officially-reported waiting times exceeded 19 weeks for the first time since October 2011 (the dark blue line on the chart below), breaching the 18 week target by a large margin. So waiting times are still going in the wrong direction to achieve the access trajectories that trusts have agreed with NHS Improvement. 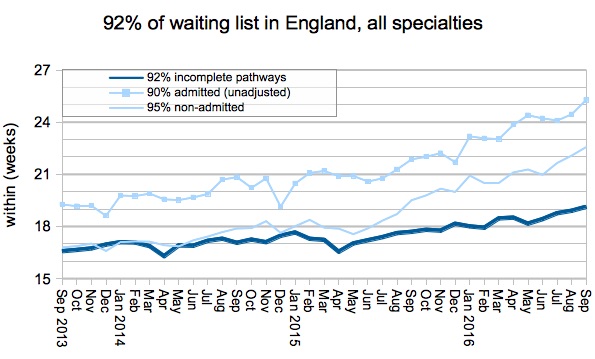 The list of non-reporting trusts did not change during the month. Factoring in the last-reported positions at those trusts, only 90.2 per cent of the waiting list was within 18 weeks, which is well below (i.e. worse than) the target of 92 per cent. 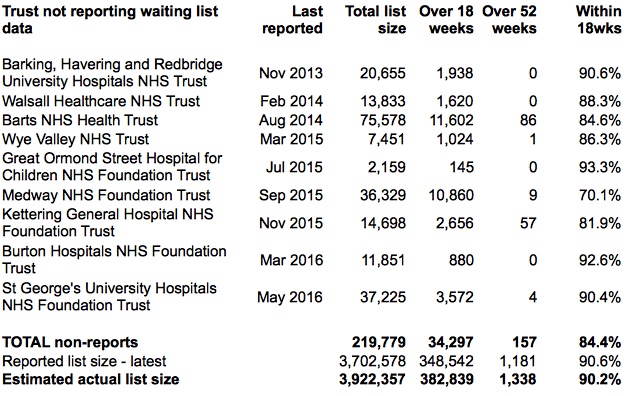 Returning to the officially-reported data, the waiting list grew slightly in September whereas the usual seasonal pattern is for it to shrink at this time of year. Because the size of the waiting list is the main driver of elective waiting times in England, this points towards ever longer waits. 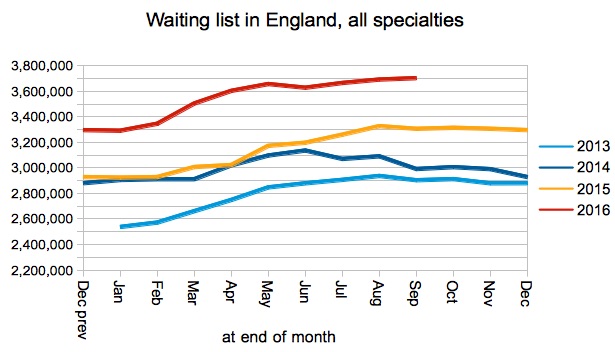 Admissions per working day were the lowest in the last 4 years, and the NHS is plainly not keeping up with demand. 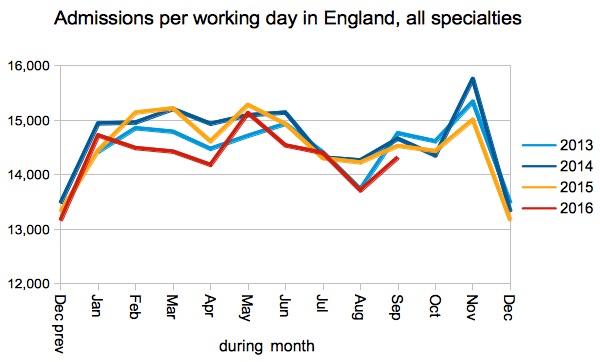 The number of one-year waiters continued to increase, and stands at the highest level since October 2012. Of course, there are likely to be many more ultra-long waiters at non-reporting trusts. 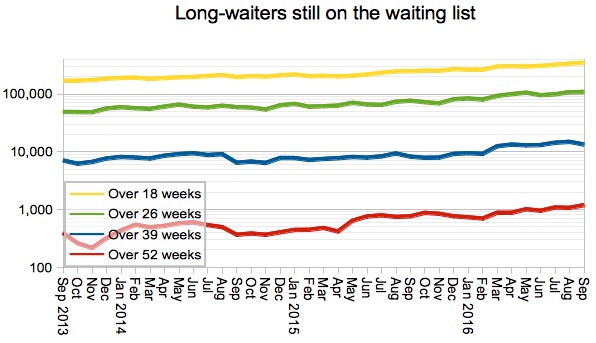 Back in August, Gynaecology squeaked inside the 18 week target nationally by only 3 patients. In September it finally breached. This means that every surgical specialty is now breaching 18 weeks at national level. 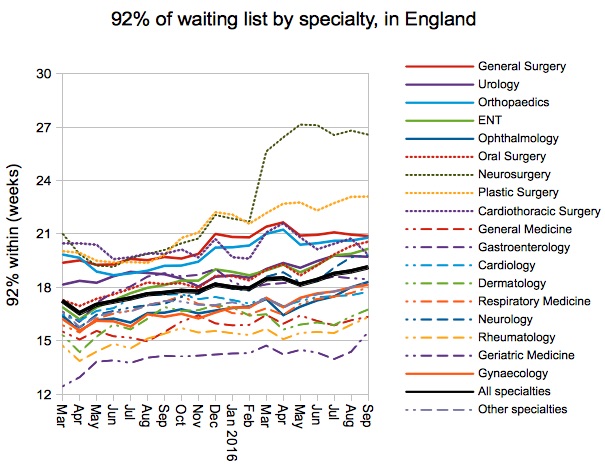 The proportion of local specialties achieving the 18 week target fell decisively again, falling through the 70 per cent level to 69 per cent. 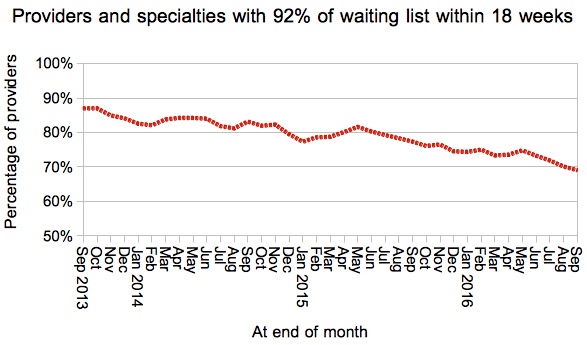 The distribution of waiting times below shows why local breaches are rising so rapidly – the middle part of the curve has reached the 18 week target, so even a small uplift in overall waiting times means that a lot of local specialties cross the line. (The time trend in the chart above is tracking the point where the distribution in the chart below crosses 18 weeks.) 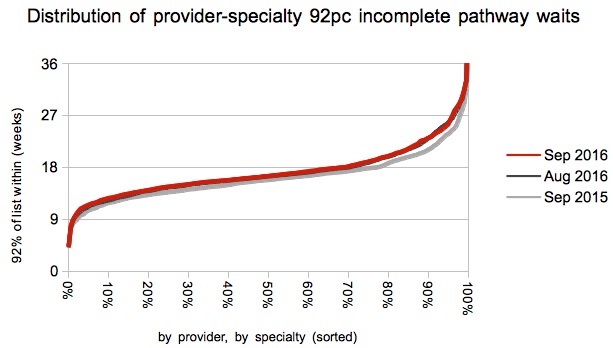 There was quite a bit of movement in the top twenty table in September, with Imperial College Healthcare NHS Trust moving up to second place, roughly swapping places with University Hospital of South Manchester NHS Foundation Trust. And Basildon and Thurrock University Hospital NHS Foundation Trust are new entrants to the table, up 18 places on their August position.