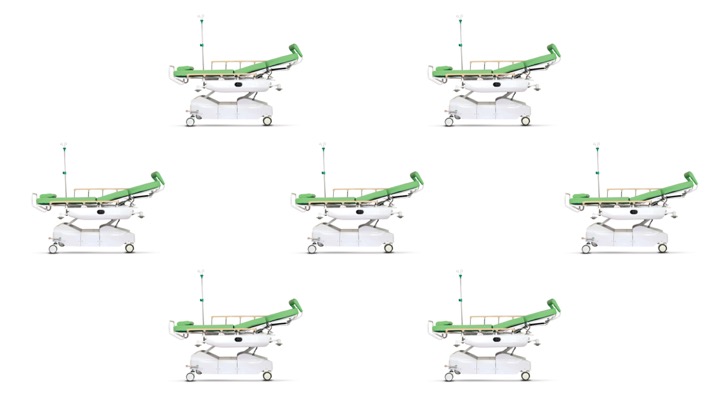 In the first six parts of this series we have focused on non-elective beds. Which may have left you wondering “what about elective beds?”. So let’s look at that now.

Elective activity is scheduled in advance, so it is predictable, and bed occupancy can be very high – perhaps 100 per cent minus the Did Not Attend (DNA) rate and the turnaround interval, or even higher if there is deliberate overbooking in anticipation of DNAs. This is a much simpler formula than for non-elective care because we don’t need to account for variations in demand – routine patients can be booked around the cancer and other urgent patients to smooth out the peaks and troughs. (The main exception is when a service is purely cancer, and then the week-by-week variation does need to be taken into account, as for non-electives.)

Alternatively this problem can be avoided by separating non-elective and elective care onto ‘hot’ and ‘cold’ sites.

But which approach is better?

The NHS has long experience of both models. The more common one is to mix hot and cold on a general hospital site. But separate cold sites have also been around for years, including Independent Sector Treatment Centres in England and the Golden Jubilee hospital in Scotland, and there is a new wave of Scottish NHS treatment centres on the way. Further south, Plymouth and Cornwall are moving orthopaedics out to cold sites, and cold sites are also being encouraged more widely by NHS England.

One might cynically remark that cold sites are a politically attractive and relatively inexpensive way of building eye-catching new capacity. But the benefits go deeper than that, because cold sites can run more smoothly and efficiently away from any disruptive spikes in non-elective demand.

It’s all good news for the ‘cold’ site, then, but things aren’t necessarily so rosy for services left behind on the ‘hot’ site. In a mixed elective and non-elective hospital, you have the option of cancelling some routine surgery if you run out of non-elective beds – but if elective services have moved to a cold site then that safety valve goes with them.

So there are pros and cons, and in the past the discussion may have rested on those qualitative arguments. But now we can calculate bed occupancy from the acceptable risk of running out of beds, which means we can put some numbers around this too.

Let’s start with a few (illustrative) assumptions that the acceptable risk of running out of beds in a general hospital – with all the consequences for clinical safety – is:

We’ll start with the scenario of a general hospital with reasonably benign non-elective bed occupancy. It might look something like the diagram below. 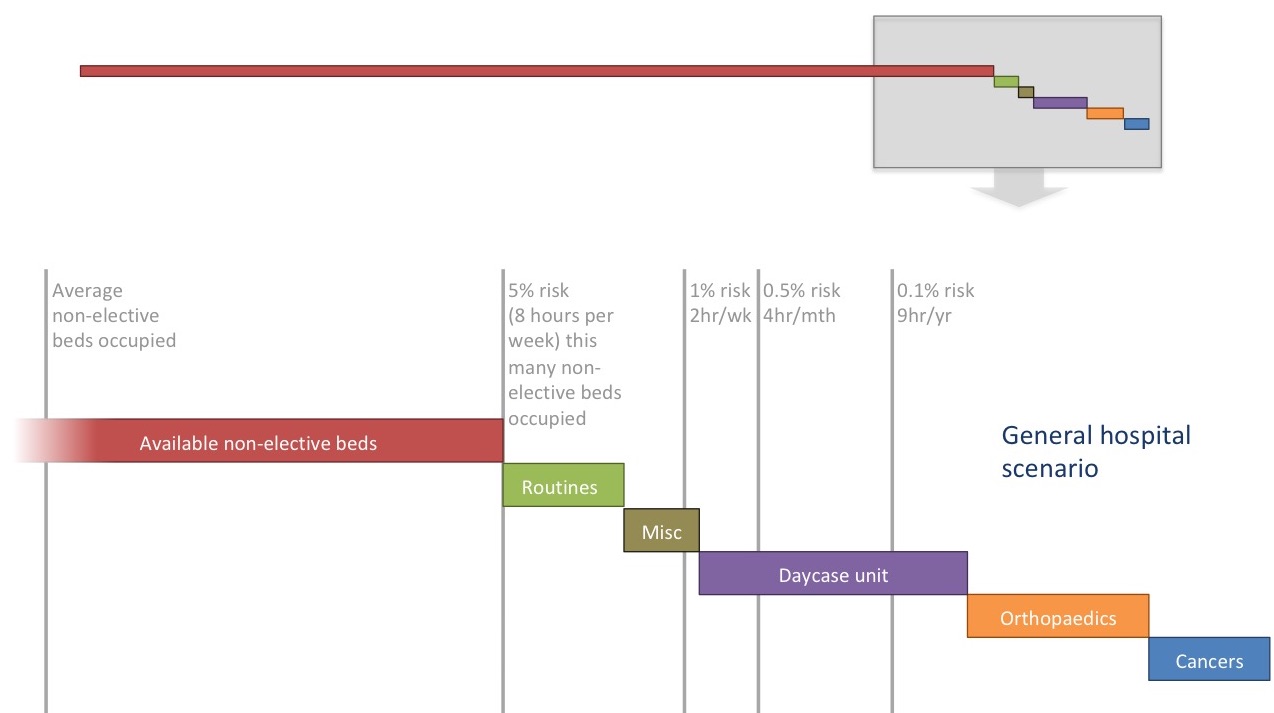 In a typical NHS acute general hospital, most of the beds are non-elective. That is reflected by the top-most part of the diagram where the long red bar represents the available non-elective beds.

Then the steps at the right-hand end show various kinds of elective bed – some of the categories are mixed together on the wards but they are shown separately to reflect the different acceptable risks of cancelling patients. The shaded area at the right is then blown up in the main image.

In the following discussion we will want to keep two concepts separated in our minds. One is the intended purpose of the available beds (shown by the bars), and the other is how they are actually used at different times (shown by the risk lines). For the purposes of this article we will assume that the number of available beds has been forecast and managed so that the risk lines represent only unpredictable fluctuations.

As the demand for non-elective care fluctuates, the number of beds occupied by non-elective patients extends in and out from the left. Most of the time, non-elective demand can be absorbed within the available non-elective beds (the red bar).

But 5 per cent of the time, in this example, non-elective patients overflow into routine elective beds. This 5 per cent risk is shown by a vertical grey line, as are various other levels of risk. In this diagram, the risk of non-elective patients overflowing into the various elective beds is roughly in line with the acceptable risks that we outlined above.

Moving orthopaedics and daycases to a cold site

What happens if we move orthopaedics and day surgery to a cold site elsewhere? If we closed those beds back on the hot site, then the risk of rearranging cancer surgery, or stacking non-elective patients up in ED or corridors, would be much higher than the 0.1 per cent that we intended – as the diagram below shows. So the level of clinical risk has become unacceptable at the hot site, and there will be pressure to re-open some of those beds.

Moving all elective care to a cold site

What happens if we then go further, and move all elective care to a cold site?

We cannot accept an even a higher risk of stacking patients up in ED or corridors, so we cannot close the newly freed-up beds – we have ended up duplicating them on both the hot and cold sites. So although we have gained the benefit of undisrupted elective care on the cold site, we have paid handsomely for the privilege by providing the same beds twice.

All that was for a hospital with a benign bed occupancy. But what happens if bed occupancy is already too high – the common position of many hospitals today? Then we might want to move services to a cold site, not so that we could close them on the hot site, but to convert them into non-elective beds.

The diagram below shows a general hospital with very high bed occupancy:

If we try to solve these bed pressures by moving orthopaedics and daycases to new capacity on a cold site, and converting those beds to non-elective on the hot site, then the picture might look like this:

The risks are now acceptable for the routine and miscellaneous beds, but still too high for cancer. And this has come at a high cost, because we have reprovided all the orthopaedic and daycase beds on the cold site, but not closed any beds on the hot site.

If instead we had just created extra capacity on the general site, and left orthopaedics and daycases where they were, we could have achieved acceptable levels of risk like this:

The sharp-eyed among you may notice that this is effectively identical to the very first scenario we looked at: a general hospital with benign bed occupancy. It achieves an acceptable level of risk, but with fewer extra beds than the previous ‘cold site’ scenario.

The even sharper-eyed might notice that we could still move orthopaedics out to a cold site and safely close the beds back on the hot site. So orthopaedics does look like a promising candidate for a cold site, which may explain why the most successful examples of cold sites that NHS England are citing involve orthopaedics.

Standing back from the detail, these scenarios show that the qualitative arguments didn’t resolve the pros and cons clearly enough, because the benefits for the cold site were clear but the drawbacks for the hot site were not. The consequences for the hot site only became clear when we calculated the risks.

We can also see how the balance of risk will vary from one hospital site to another – the numbers of beds will vary and so will the risks. This example came to one conclusion, but the next example might come to a different one.

In summary, a proper, risk-based, quantitative analysis is essential to taking a balanced view on whether a hot/cold split is better than a general hospital model.

We can calculate beds, bed occupancy and risk for your acute hospital – please get in touch if you are interested.